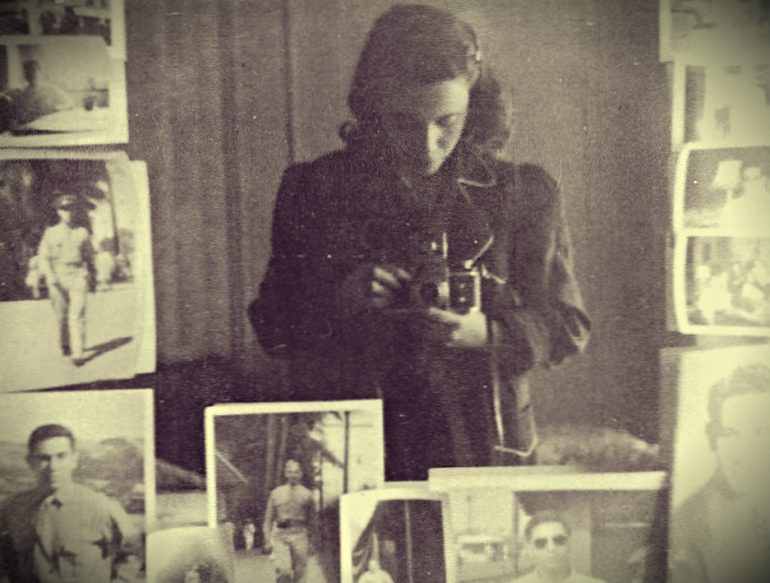 Meet Cecile Trace. She told me right off the bat that being 91 years old is “yicky.” Naturally, I immediately liked her. I found her to be funny and smart as a whip.  She has a certain honest sass about her – in the best way possible. She may not believe it, but she is someone to know. I met with her and Konnie Trace, her daughter-in-law, recently and upon my arrival, the two shared with me Cecile’s schemes to have cheese and wine for my visit. (More points in her favor) So, here her story begins.

Born in Chicago in 1922, Cecile Trace studied 14th Century English Literature at Northwestern because (she states frankly), “I like to read.” After receiving her degree, her way with words combined with what I perceive as a wonderful fearlessness of life took her back to Chicago to be a journalist – to the “gangsters of Chicago, the throes of Chicago,” she says. “That’s the only thing I did. That’s what I remember. In Chicago, we had what is known as the City News Bureau. It was there because editors wanted a central place for journalists to be trained. Pay was practically nothing – something like $15 a week.”  She began working for them and recalls that “all of it was crime for the City News Bureau. They just wanted violence. The newspapers had their reporter and gave them training from the head guy and the ‘re-write people’. They would just beat you to the ground. It didn’t matter who you were or who you knew. I would say, ‘My father knows the Chief of Police’, and I’d get (in reply) ‘You say it again and you’ll be out on your behind!’ You just went in and worked – day and night.” Trace was an on-scene crime reporter, noting that she was in the office only to get any available assignment; if there weren’t any, she looked for them. “You went to a police station until they got tired of you – and then you went to another police station. Certain things happened that were ‘big time’ then,” she says.

Trace spent about three years at the City News Bureau and had married Herbert David Trace, who had just finished an internship at County Hospital and went into the Marine Corps as a surgeon. “I admire the military,” Trace says, “I tried to get into the Army, but they wouldn’t take me. I wanted to be an officer, but I wasn’t old enough. I didn’t want to be just an enlisted person because I had no idea how they treated women at that time. So, I didn’t go. That’s when I started working for the Tribune.” Her husband, however, did become an officer – a Captain, in fact, and received not only a Silver Star at Iwo Jima, but also a Bronze Star at Saipan. “He was a big hero,” Trace says with pride, and “it was a terrible fight.”

After the Tribune, her husband came home from the war and she followed him out to CA, where she “started being a wife and mother. It just seemed to me that that’s what we all did – everybody I know. Settle down and become a housewife (“what a word!” she laughs).” Cecile and Herbert Trace had three boys together. She was even doing some freelance writing at this time, but she says, “It didn’t amount to much, actually – as a newspaper story, so it left something to be desired. I did go back (to The City Newsroom), you know, about 15 years after that and try and, well, try to pretend that I hadn’t been out of the business all that time. But they wouldn’t let me forget.”

About being a journalist, Trace says, “It wasn’t make or break – it was just growing up. There was always something going on, especially I mean, people were being gunned down on the streets and there were gamblers being kidnapped and, I mean, all sorts of wonderful things happening (she grins) – none of which anybody wanted to particularly cover. It isn’t a place where you’re learning your manners and they don’t pretend that this is what you do, ya know, in order to get a story. It depends on where you are – if you don’t have any competition, there’s no problem. Not really. But, we had competition.”  But she did it because she wanted to and at some points it was still fun and she even “felt like a big shot,” which Trace says she had never felt before.

Trace knew that the City Newsroom was just a stepping stone in her life – and so she and her husband began to travel to places such as Africa, Japan, the South Pacific, Rome, China, or the bottom tip of S. America where you were so close that “you could look over and say, ‘Eh! There’s the South Pole!’ (Insert another of her great smirks here) – It was very interesting stuff.”

She was also a precinct captain in Chicago during elections. “I think that before we moved there, they didn’t have any democrats in Evanston – very few, if any. They were quiet and secretive; they only went out for groceries on good days. (She chuckles) It was not safe to be a democrat in Evanston, but we changed all that,” she voiced. The more Cecile Trace talked and revealed the brightness in her eyes, the more I realized the richness of her life; there’s vast history and story in our older generations which deserves respect. Konnie added that, “She didn’t tell you, but I will, that she is the daughter of Sam Rosen, a Jewish immigrant from Russia, who started a bakery as a young man in Chicago and was famous for his Rye bread. It still lives on under Maryann Bakery.” 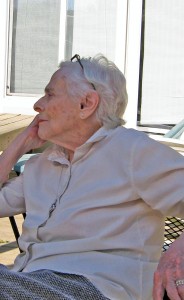 Trace says still that she is most proud of “My kids! My son, Peter, the doctor! (She looks at Konnie, his wife). “The brats,” she jokes lovingly, but then is quick to insert, “No, I’ve raised three good kids who are honest – I say honest – to the day is long.” She’s proud to add that there are five generations of doctors in her family, with a medical school application in the works that could make it six. Cecile Trace moved to Jacksonville in 2010 to be closer to her son and Konnie after living in her Chicago home for 57 years with her husband. “We raised all the neighborhood kids in it,” she smiles.

“Well, that’s the story of my life. I don’t want a biography, actually. I don’t know that we’re important enough or interesting enough to bother.  I am, of course.” (Again, she snickers)