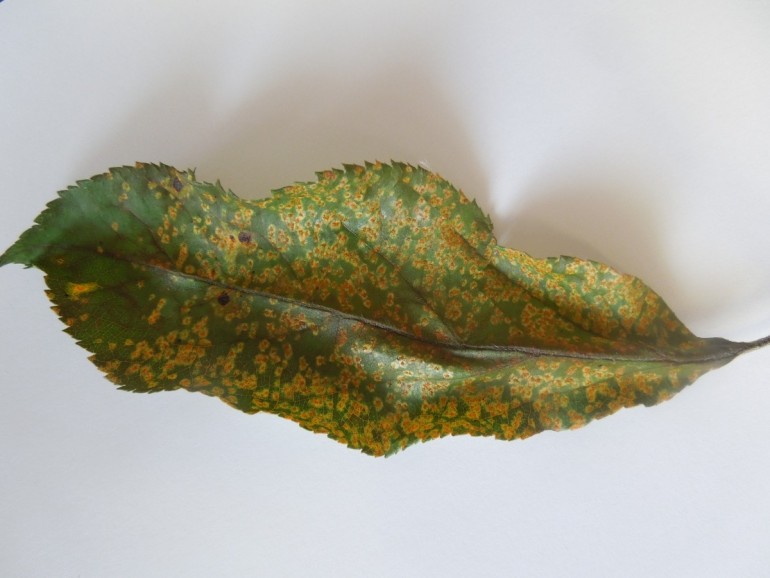 Over the past few weeks people growing apples have brought in leaves that have been infected with rust. Cedar-apple rust is a common disease in susceptible apple (as well as crabapple) cultivars, such as Beacon, Jonathan, Rome, Wealthy, and York Imperial.

Tiny yellow spots will form on leaves after they have become infected in the spring. As the spots grow and mature they become yellow-orange in color and will become swollen. A red border will begin to develop around the spots and small black dots will form in the center of the spots as well. By mid-summer small cup-like structures will develop on the undersides of leaves. While the fungus is usually found on the leaves, it can also infect the fruit and potentially young twigs.

As the name implies cedar-apple rust infects both cedars and apples. In fact to complete its life cycle it must infect both hosts. Cedar-apple rust will infect eastern red cedar as well as several other species of juniper. It will form galls on junipers in spring and they will grow throughout the summer and fall, growing to be about 1 inch in diameter. The galls will be greenish-brown to tan in color and round or kidney shaped. In the spring, bright orange ‘horns’ (telia) will emerge from the galls and will release spores. These spores will infect apples. The spores can travel for several miles, however most infections happen within several hundred feet from an infected juniper.

There are several management practices that can be taken. First, resistant cultivars should be planted, especially if rust problems have been a recurring problem. Some apple cultivars that are resistant to cedar-apple rust are Cortland, Dutchess, Golden Delicious, GrimesGolden, McIntosh, Red Delicious, Stayman, and Winesap. Another way to help manage cedar-apple rust is to remove junipers that are growing in the area (within 3 miles). Unfortunately this is neither practical nor possible, especially an urban setting. Instead, try removing galls from junipers on your property (if any are present) before the ‘horns’ begin to emerge. Fungicides can also be applied to trees if rust has been a problem in the past. Spays should be applied when are in the pink stage, just before the flowers begin to open, and continued until 1 to 2 weeks after petal fall (when 75% of petals have fallen from flowers).