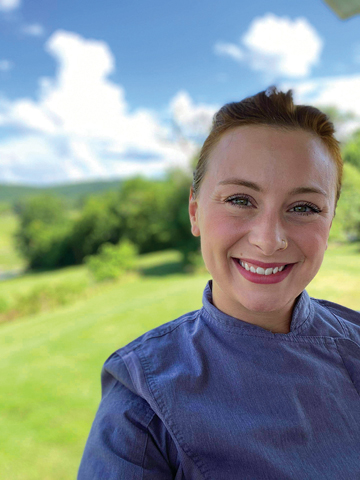 With a pinch of determination, a dash of creativity and a whole lot of drive you have a recipe for success. Recently a pastry chef from the Midwest, with ties to Jacksonville, had the opportunity to take that recipe and shine on a national platform.

Meaghan Coltrain of Hermann, Missouri, daughter of Jen Bourn (husband Chris Bourn) of Jacksonville, recently took her culinary talents to New York City where she competed on the August 18 airing episode of “Chopped Sweets.” Before we share the results, for those of you who didn’t see the episode, let’s learn a little bit about Coltrain.

Working in the hospitality industry since the age of 15, Coltrain began as a busser and then worked up to server before deciding to set her sights on culinary school. She attendd Le Cordon Bleu College of Culinary Arts-St Louis in St. Peters, Missouri. During her schooling, she participated in their internship program in Palm Beach, Florida where she worked in her first professional pastry kitchen.

The specialty of being a pastry chef was an easy decision for Coltrain. “I’m a bit of a control freak with a science-driven mind. Pastry is very technical and requires precise measurements,” commented Coltrain. “All of that combined, with my insane love for chocolate and sugar, has me addicted to the pastry world.” When she started culinary school in 2010, she worked at the Donut Shop (now Safeco) in Jacksonville. While there she learned about early morning baking and managing a bakery.

Today, Coltrain is a culinary and communications coordinator at Hermannhof Winery in Hermann, Missouri. Her culinary responsibilities include pastries, wedding cakes, breakfast programs and catering events. Additionally, she oversees the company’s social media and marketing.

Hermannhof Winery is comprised of several entities: The Inn at Hermannhof, Tin Mill Brewery and Steakhouse, Black Shire Distillery, Hermannhof Tasting Room, Dierberg Star Lane tasting room and the Hermann Farm. Hermann is a little town reminiscent of a Hallmark movie. Coltrain will be running the breakfast program within the inn, creating desserts for the restaurants, and designing wedding cakes for the intimate weddings held throughout the property.

In addition to these many duties, Coltrain has taken a passion project and made a side business. Milkmade focuses on the health and wellness of expecting and postpartum mothers. She has created recipes focused on ingredients that are organic, locally sourced and that promote lactation for breastfeeding mothers. “I hope to spread knowledge and create a community for women to confide in birth workers and mothers by incorporating my culinary skill and doula background in Milkmade,” added Coltrain.

Now that you’ve gotten to know Coltrain and learn about her background, here’s some information on her episode of “Chopped.”

“I was very fortunate to have a friend recommend me to the producers of “Chopped” and after several interviews, I was chosen for my episode,” remarked Coltrain. Even though the episode appeared on August 18, it was filmed in March. Coltrain competed against three other pastry chefs. She made it to the final round where she and the other contestant were challenged with creating a dessert out of a banana split, french fries, fruit cocktail and beer.

Coltrain chose to make Banana Cream Cheesecake with beer caramel and ice cream pearls. Her competitor Chef Dwayne Ingraham used the combination to create Bananas Foster with beer caramel and french fry streusel. In the end, the judges chopped Coltrain and declared Ingraham winner on “Chopped Sweets.” “While I fought a good fight, I ultimately lost to Chef Dwayne. I am so proud of the work I did and can’t wait to go back for redemption,” concluded Coltrain.