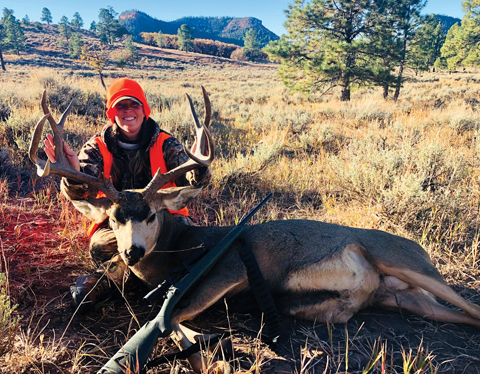 November in Illinois not only brings the final glimpses of fall but the anticipation of deer hunting. For one local hunter, this year’s season had a warm-up in Utah one month early.

“Utah has a system for certain portions of land that you can only hunt on if you apply for and draw a tag,” reports Wendy Keithley, a Jacksonville resident. “I had been trying to draw for seven years, accruing points for every unsuccessful year. This gave me a 2.4% chance of drawing a tag for that area.” Her goal was to hunt mule deer, a species indigenous to western North America, and she successfully drew the tag.

Keithley, along with her husband Kendric Keithley, did their research before they left. They were very familiar with whitetail deer hunting in Illinois; their patterns and behaviors as the season progressed. But to be successful in hunting mule deer, especially in unfamiliar territory, Keithley’s husband sought the advice of a local biologist for the hunting area they had chosen. Using the information they obtained from the biologist and their whitetail knowledge, they set out on their hunting trip.

Departing from Jacksonville on a Tuesday they headed to San Juan, Elk Ridge in the southwest corner of Utah near the Henry mountains. On the way, they stayed in Kearney, Nebraska and Blanding, Utah. They spent a day scouting the area and set up camp on Thursday night. Bears Ears Monument was visible from where they camped and were surrounded by free-range cattle. Friday brought more scouting and preparing for Saturday’s opening day. By 7 a.m. on Saturday they were set up and within the first hour on opening day Keithley had fulfilled her mule deer tag. The mule deer she had harvested was a 4 x 4 and scored roughly 179 inches. Later that day they were heading back to Jacksonville.

Starting about 10 years ago when Keithley met her husband she began taking up hunting and fishing. Since then she has tried compound bow, crossbow, muzzleloader, shotgun and rifle; enjoying the challenges that each brings. “We are primarily local hunters but, we don’t hesitate in scheduling the occasional hunting vacation,” added Keithley. She journeyed with her husband on a bear hunting trip to Maine, both of them have been bear hunting in Georgia when she was six months pregnant with their daughter and they spent their first anniversary on a caribou hunt in Alaska.

The family goes on hunting and fishing trips together quite often. One of the early memories involved her daughter Kenleigh when she was two years old. She insisted on bringing her toy gun because it was a hunting trip. Keithley and her daughter were preoccupied with getting situated for the hunt while her husband was setting up the deer decoy. When her daughter got a glimpse of the decoy she reached for her gun and took her shot. Of course, Kenleigh’s parents recorded her with her harvest both with photos and video. Just like every great hunter that documents their hunt for the TV cameras, Kenleigh proceeded to document the whole event while the camera rolled.

Wendy Keithley is a Carrollton native and Kendric Keitley is from Jacksonville. They make their home on Keithley Farms with their two children, Jacob and Kenleigh. In the spring, they take orders for produce which they deliver to Jacksonville and surrounding areas. In the fall they open their pumpkin patch to the public. Visitors can purchase pumpkins, play games, and get up close and personal with their farm animals. Follow them on Facebook at Keithley Farms