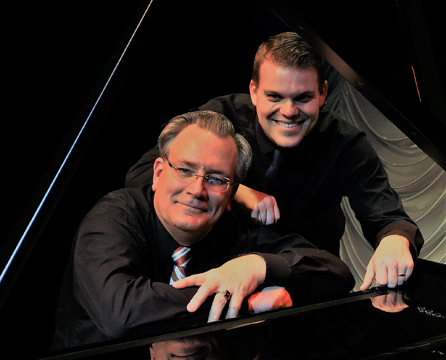 When you combine a lot of humor with loads of musical talent benefiting a local group that does a lot of good, you have a great time.

On May 1 at 1 p.m. Dual Piano, Mark Gifford, and Damien Kaplan from Springfield, will be in concert at Central Christian Church. The church is located at 359 W. College Ave. in Jacksonville. The concert is free to the public but, a love offering will be collected for the community ministry Jacksonville Area Senior Chaplaincy Care Incorporated (JASCCI).

A not-for-profit ministry, JASCCI provides Christian services to any retirement or nursing facility in the Jacksonville area. Those currently served are Jacksonville Skilled Nursing, Cedarhurst, The Pointe at Jacksonville, Heritage Health, and Lavender Ridge.

Both Gifford and Kaplan have been making music together in one form or another for more than 20 years. Their concerts feature a variety of music and a dash of comedy. “The music rings familiar both old and new,” stated Gifford. “You will hear music from Broadway, swing, jazz, and sacred. They have all been arranged by both of us.” The concert will last for 90 minutes. Gifford is the Director of Music and organist at the Cathedral of the Immaculate Conception in Springfield. He is also the house organist on the Barton Theater pipe organ, which was removed from the Orpheum Theater, in Springfield High School.

In addition, he is one of several organists at the Fox Theater in St. Louis Missouri. Mark has, for many years, either been at the piano or on stage for the Springfield Muni, Springfield Theater Center, Theater in the Park at New Salem as well as Hoogland Productions.

Being the other part of Dual Piano, Kaplan is the Director of Music at Sacred Heart Griffin High School in Springfield. He is also the Director of the Lincoln Troubadours, a choral ensemble heard around downtown Springfield sites during the summer tour months. He is also often heard, but not seen directing the orchestras for the Springfield Muni, Springfield Theater Center, and various other performances both in the orchestra or on stage singing and acting. Kaplan plays the vibraphone, piano, and anything and all things drums.

The last couple of years have been different for the ministry. As COVID restrictions have been loosening for many people, the biggest difference for JASCCI has been being allowed to come into the facilities from the outside.

“Residents were hungry for the interaction that we once were able to give,” commented Pastor Bill Baughman, lead pastor for the group. “We are able to offer chapel services and Bible studies in more of an abbreviated fashion.” The group does follow all protocols regarding social distancing, the size of the group, and mask wearing.

The proceeds from the love offering will go to support the work of the ministry such as helping to provide for the four paid chaplain staff, supplies, mailings, etc. “Anyone wishing to donate, may do so at any time,” concluded Baughman. “We cannot do our ministry without the prayerful support of others.” Pastor Baughman can be reached at 217-204-3104 regarding JASCCI.