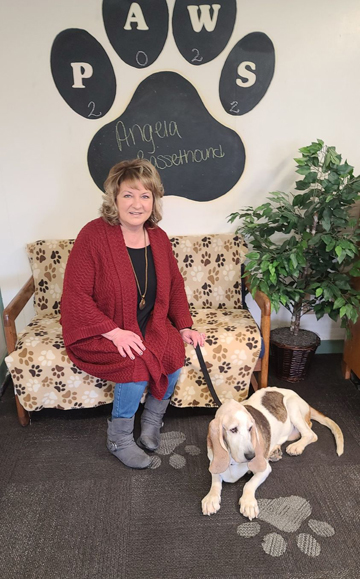 People in Jacksonville and the surrounding area have big hearts. When there is a need and people can help they step forward.

The volunteers at PAWS see acts of kindness every day but recently one woman opened her home to an incredibly special rescue pup.

Meet Angela, a basset hound. Nothing is known about her past, just that she was dumped. Many of the rescues at PAWS usually have a back story of why they need a new home. In this case they had to rely on a visit to the vet to see what they could determine. She was figured to be 14+ years old with kidney failure, heart worm, and problems with her ears. Her situation was dire and, just like all the other rescues, the staff knew she deserved something better.

When there is a need, no matter how difficult it seems, people open their hearts and lend a hand for PAWS. The fastest way to get the word out has been through social media and in this case, Facebook. One day they put out Angela’s story with some pictures and that is all it took. The next day, Amber Smith Bunfill stepped forward and was determined to give Angela the love and support she needed in her final days. “She and my 16-year-old Siamese cat get along fine,” said Bunfill. “She is adapting better than any animal I’ve ever taken into my home.”

Her limitations are obvious. She has difficulty going up and down even one step. She walks very slowly and eats little of a home cooked diet of chicken, rice, and kibble. Her breathing is sometimes labored, and she sleeps a lot. “We have no idea what her projected time is. It could be days, weeks, or months,” she added. “We will love her and enjoy her while she’s with us.”

Angela is adapting to her new life in the Bunfill’s home. “She is so smart, sweet and patient with us.” In talking about what they have learned from Angela since joining the family is they believe she lived in a home. She lays by the table when they eat, she goes to one door when she needs to go out and has never had an accident in the house. Angela will get into the car without hesitation, and she knows basic commands such as come, no, good girl, etc. This experience seems calming for Angela.

Bunfill’s family are no strangers to pets or working with PAWS. They adopted a Pekinese as an adult dog who was with them for more than seven years. When he passed, he had developed arthritis, cataracts, and a seizure disorder.

They had also adopted another adult dog that was heart worm positive and unfortunately only with them five months before he passed. When she was 24, she became aware of a beagle that was not in a good home situation and she was able to rescue her and give her the last two years of her life in a quality environment.

“Being a hospice caregiver is the hardest thing ever. You walk into a situation expecting to fail by society standards,” Bunfill concluded. “But, lying next to the animal on the floor or cradling their head in your lap while they say goodbye is okay. If you know you made the years, months, weeks, days, or moments before as good as you can for them, you have done your part.” She added, no animal should go to the Rainbow Bridge alone.