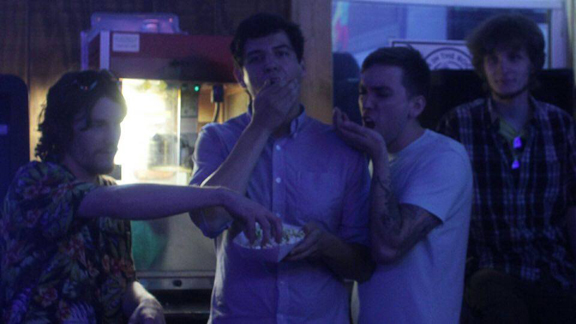 I recently took some time to find out more about the local band, Flamingo, from its creator and leader, John Franz. While chatting on his porch on one of our more temperate summer evenings, Franz proudly told me, “We’re loud, smooth and we’re a good time and you should book us!” To an untrained ear or the folks sharing rehearsal space with the band, loud might be applicable. “We’ve been kicked out of five different practice spaces since we’ve been a band and been told that we cannot play where we’re playing … and the space we’re using now has got a restriction that we can only play after 6 p.m. weekdays. Weekends, well … all hours are fine on weekends; but weekdays … they’ve tamed down their sound over the past four and a half years, “… but we’re still loud … not too loud … but we’re loud!”

Several years ago, Franz was in another band called The Anonymous. He told me, “I wrote all of the songs. I was pretty much the leader but it disbanded and we broke up. I decided that I wasn’t going to function in that manner anymore.” He recounted,” I write all these songs and someone leaves and the band is over, done with, so I just decided, ‘Okay … I’m going to start this band called Flamingo and do it this way …’” Franz started cranking out a large volume of music. Sometimes the song would be 100 percent from him and other times, he’d collaborate with another writer. He began to collect all these songs and put them into “this one bucket,” so that down the road the songs wouldn’t be specifically tied to one group of performers. This was transformative for his music making, because it would free individuals to come and go as needed or as their availability would allow. “So, hey,” he said, “this is always going to be happening and if you want to come be a part of it, then go ahead and come be a part of it … and if you need to leave, then you’re able to leave without leaving the band in a lurch or dismantling it.”

The very first combination of performers for Franz’s band four years ago included: Hayden Woodward on drums, Josh Peyton on guitar, Nick Willis on bass and Franz singing vocals and playing guitar. Currently, the band is made up of: Eli Newman (drums), Charlie Brooks (guitar), Jesse Reynolds (bass) and Franz, of course. Other than Franz, the most senior player with the group is Reynolds, who has been involved for around three and a half years. Other band contributors that have come and gone throughout the years include: Stephen Sliger (guitar), Devin Norris, (guitar), Michael Fox (drums) and Sarah Shive (singer and tambourine).

If you’re a fan and wondering where you might catch Flamingo playing live or would like to experience it for the first time, unfortunately, there aren’t any current bookings scheduled. Instead of touring or performing at local fairs, pubs or festivals, they are focusing all their creative energies into releasing one video per month. This strategy began in April. However, Franz decided to switch things up in August and released six songs, one song a day, and made them available for free download at flamingofeathers.bandcamp.com or at facebook.com/flamingofeathers. This winter, he plans to start adding back the Friday night bookings and then expand to Fridays and Saturdays mid-spring and summer.

Of his long-term future goals or hopes are for Flamingo, Franz said, “I’m just gonna keep doing what I’m doing in every way possible.” I asked him if he was shooting for the “big time.” He quickly responded, “ I kind of have to get it out … it just kind of comes out … and if I have to keep working at a 12-hour a day job for a while to keep making music and put this stuff out into the world, then I will.” We laughed when he said that he’d be lying if he didn’t wish for complete sustainability from his creative outlet. Then he paused and thoughtfully told me, “Honestly, if I can just reach more people. Even if they just get the free stuff and download that, it’s really meaningful to me that they’re going to be hearing it, you know!” He added, “It’s the most meaningful work, you know … when you really feel that you’re doing something for the world … not just taking from it … that’s why I gotta keep doing this, no matter what.”