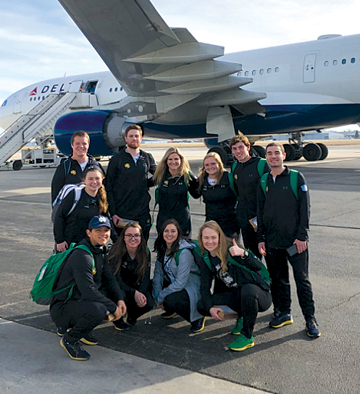 One Jacksonville native began her love of all things Notre Dame (ND) from an early age, when her family would make the trip to northern Indiana to root from the stands at football games. Today, when Kalleigh Burke is not studying hard you can find her on the sidelines at the Notre Dame stadium helping her favorite team.

When Burke started looking at colleges while a student at Routt Catholic High School (RCHS), she liked the idea of going to a school like the University of Notre Dame. “I knew they would challenge me and give me opportunities that I otherwise would not have,” tells Burke. “I knew that I wanted to study business and their program was top-notch.” Also helping her make her decision was the fact that she was Catholic and related to the school’s faith-based foundation and commitment to service. Upon her graduation from Routt in 2018 she officially joined the ranks of the Fighting Irish.

During her freshman year, Burke decided to enter the selection process to become a part of the football team staff. She had to attend a few practices and be evaluated. It was not meant to be her first year, but she did not let that stop her from going for it again her second year and succeeding.

Burke is now a junior Finance and Spanish major and in her second season as a student equipment manager for the football team; working for the defensive line in particular. “One day I saw an advertisement flyer in my dorm and I knew the job was for me,” commented Burke. “I have been a huge Notre Dame fan for as long as I can remember, and I saw this as an opportunity to somehow contribute to the program.” As a junior, she gets to travel with the team to all five of their away games as well as work all six of the home games. Because of the pandemic, the Fighting Irish had to join a conference for the first time.

As members of the Atlantic Coast Conference (ACC), Notre Dame is currently ranked number one out of the 15 teams in the conference with a conference record of 6-0 and an overall record of 7-0 after a nail-biting win over Clemson. The game was tied four different times but after two overtimes Notre Dame defeated Clemson 47-40. It ended Clemson’s 36-game regular-season winning streak that began in 2017 and took ND up to number 1 in the conference. Clemson is now placed second in the conference with a 6-1 conference record and a 7-1 record overall. University of Miami, University of North Carolina, NC State, and Virginia Tech round out the top six teams in the conference. Burke added they have a good chance of playing in the ACC championship as well as a bowl game at the end of the season. Additionally, they hope to make the college playoffs as a top four team.

As an equipment manager, the typical week for Burke usually begins with team walkthrough days on a Monday where she might run chains or signal cards. Tuesday through Thursday brings full practice in which she arrives a full hour before the team to get all the equipment out. During the practices, Burke sets up all the drills for the defensive line and works closely with Coach Mike Elston to make sure that he and the players have everything they need so they can just focus on practice. If it is an away game, they will depart on Friday but if they have a home game, they use that time to prepare the locker room.

On Saturdays, the equipment managers report to the stadium six hours before game time. Their duties include setting up the field and putting finishing touches on the locker room. About two to three hours before kickoff the players arrive and start warming up. During the games, Burke has different responsibilities from week to week. She often serves as a ball girl with the refs, occasionally works the signal cards and works on the sidelines helping the coaches with their whiteboards. On Sundays they prepare the equipment for the next week, repair face masks and prepare new practice jerseys with updated numbers for the scout team. She enjoys traveling on away game weekends. The team and staff travel by private jet to the games and when en route to and from the jet by bus they receive a police escort. Their accommodations are always nice, and they always enjoy great food which is served up to four times a day.

Kalleigh Burke is the daughter of Jim and Laura Burke and credits her dad for being the one who got her interested in football from an early age. “It has been really cool to get to know the players, coaches, and staff,” concluded Burke. “Coach Elston has an understanding of the game that is amazing and the players are some of the most well-spoken college students that I have ever met.”