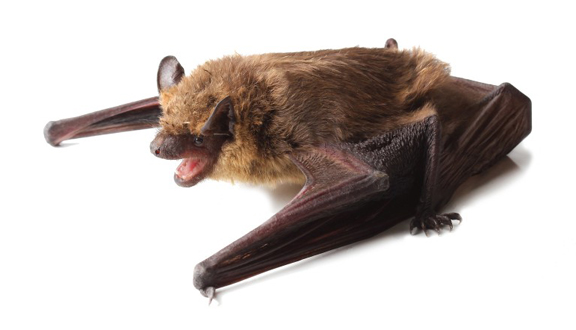 One of the most misunderstood animals found in Illinois is the bat. There are many persistent, false rumors and legends that have given bats a bad name. The following information comes from Extension Educator Jason Haupt.

If you are sitting out on your porch, patio or deck at dusk, you might see bats swooping around your yard. Most bats in Illinois tend to be proficient fliers catching the vast majority of their food while in flight. Bats found in Illinois are small with the most common bats having a wingspan of 12 inches or less and weigh one-half ounce or less.

The grey bat, eastern red bat, silver-haired bat and Rafinesque’s big eared bat tend to leave the state during the winter months. In this group, grey bat and Rafinesque’s big eared bat are endangered. The hoary Bat and evening bat are not typically found in Illinois during the winter months, moving further south when the weather begins to get colder.

All species of bats in Illinois are insectivores. They eat hundreds to thousands of insects each night. A single female bat with a pup can eat in excess of 3,000 insects a night. Bats in Illinois eat insects that cause a number of problems, including those that cause disease. Though they will eat some biting insects like mosquitoes, they tend to go with easy meals that usually are larger insects like moths or some of the larger nocturnal insects. Bats are extremely beneficial to farmers eating insects that are highly damaging to crops. It is estimated that they provide a benefit of 3.7 billion dollars to farmers across the nation by reducing the amount of chemicals that are used on farm fields.  Around the world, they are important as pollinators and seed spreaders in addition to pest control. Many of the foods that you love would not be available without bats. These include coffee, chocolate and citrus fruits.

Though there are some public health concerns associated with bats, they are no more dangerous than any other wildlife.  They can carry rabies, but as a whole they are less likely to have rabies than many other mammal species (only 3-5 percent of tested bats each year). By far, the biggest danger that bats pose comes in the form of fungal infections (Histoplasmosis) associated with their feces. This only becomes a danger when you are using a building that is heavily used by bats or when you have a large number roosting in your home. The same danger is presented with bird feces.

A better understanding removes much of the fear that is associated with this animal and might even create some passion to help these animals that are threatened by habitat loss, disease and lack of roosting sites. One of the biggest threats to bats currently is an invasive fungus called white nose syndrome (WNS) that is making its way across the United States.  If you want more information about bats, please visit http://tinyurl.com/extensionbats or www.batcon.org.  For more info on White Nose Syndrome, please visit http://tinyurl.com/WNSIL.