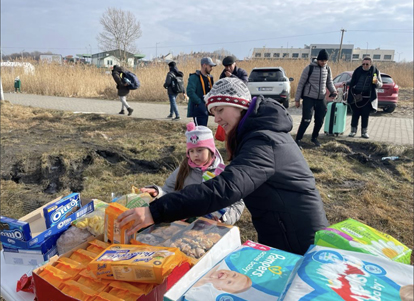 The images are everywhere. From TV news to social media platforms, the war between Russia and Ukraine has been horrific to watch. Meanwhile, there have been many avenues which people could take in order to help Ukrainians caught in this tragedy. One local person is doing what she can and wants to invite you to get involved.

Bethany Hadden, wife of Dr. Kyle Hadden, follows an American political account through Instagram and one day, she noted several ways shown on the Insta account, which showed how people could help the Ukrainians during this crisis. One of those suggestions was to become an ambassador for Global Empowerment Missions (GEM). The concept seemed simple for someone like herself in Central Illinois to lend a helping hand.

Through Amazon, Hadden can go through the specific “Wish List” set up by GEM for the crisis workers in Poland who are helping the Ukrainian refugees. The items on this list are wide-ranging, varying from baby clothes to survival kits. Purchases are sent to the warehouse in Doral, Florida, to be distributed appropriately to the workers in Poland. “They are asking for clothing for all ages,” she comments. “Not only do they have emergency aid kits for you to send but they are now asking for food items as well.”

Although Hadden has not been involved with GEM until this project, the ability to help is near and dear to her heart. “There are many fine organizations that put themselves in the thick of things when help is needed. We have recently been involved with CARE, World Central Kitchen and Samaritan’s Purse — all reputable groups that have a strong history of caring for the least fortunate,” Hadden adds.

When GEM came up on her radar as an organization making an impact in this situation, she did not hesitate to research them. “I really admire all the work they have done for people through various hardships throughout the world,” she said. GEM is providing relocation assistance for Ukrainian and non-Ukrainian evacuees. They are working to provide stable housing and currently are helping to relocate 50,000 families and have been on the ground in Poland since day two.

Watching all the firsthand accounts of what the people of Ukraine are going through has been heartbreaking for the Haddens. “As Christians, we believe we are the hands and feet of Jesus. That means helping those who are suffering both here and abroad,” she concludes. The images of parents with young children traveling miles to find safety has been difficult to watch. Those stories help to motivate them to help from their own corner of this great big world.

GEM has been in operation for two decades. They have helped with natural disasters of all kinds, homelessness, problems stemming from COVID-19, many refugee problems over the world and now the war in Ukraine. The response is threefold: immediate response to the disaster and civic emergencies, time between the first response and government or permanent infrastructure established, and long-term response in recreating a self-sufficient and thriving community.

The Haddens relocated to Jacksonville in the summer of 2021 to establish his medical practice. They have two sons, Robby and Daniel.