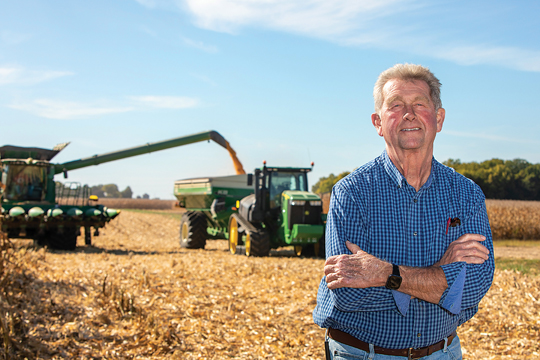 The Armstrong Family Farm was established in the 1900s by John and Laura Armstrong. Multiple generations later have found the farm operated by Evan and his family, alongside Betsy Hutchison and her family. Corn, soybeans, cattle and hogs have been raised on this land. The Armstrong family is thankful for their hired men. Without them they could not carry on the day-to-day tasks of operating a farm.

In 1892, the Becker family began farming by purchasing their first farm ground called the Homeplace on Rt. 123. Becker Farms currently has three generations working closely together on the farm.

Cully Farm began in 1946 with Gary Cully. The farm is currently run by Cully and his two sons, Adam and Aaron Cully. Both Adam and Aaron have sons that will hopefully join in the family business one day.

The Hadden family moved onto the first property in the late 1800s. They moved to their current farmstead in 1929. This is the 5th generation to work on the diverse grain and livestock family farm.

The Headen family has been farming now for over 150 years, 5 generations working the fields. Don Headen has personally farmed for 50 years, and Jason over 25. The Headens feel extremely fortunate to have family members helping them farm as well as a full-time employee and a couple of seasonal employees.

The Jackson family bought their first farm ground right after the depression without a dollar to give but just with a simple handshake. Later, the farm was paid for with a check from the U.S. Army for time served. Today, the farm is operated by the 4th generation of the Jackson farmers.

The McQueens have been on the current farmstead since 1944. This is the 4th generation to work on the corn and soybean farm.

The Potter family has been farming since the late 1800s, originally around Lynnville. Near the end of World War II, Adam’s great-grandfather purchased the land on the west side of Morgan County. AJ Potter is the 6th generation to farm the land.

The Schone family purchased their first farm in 1853 from the government. Brad and his father, Howard, farmed the land until Brad passed away in 2009. Brad’s wife, Joan, left her nursing career to run the farm until her and Brad’s oldest son, Kyle, finished school. Howard, Joan, Kyle and Chad (Brad and Joan’s younger son) now farm together, both livestock and grain.

The Waggener Brothers Farm lineage has been siblings Harold and David Waggener, followed by David’s sons, Lynn and Tim Waggener. Since Lynn’s death in 2005, Tim farms the land along with Lynn’s sons, Blake, Garrett and Spencer. The homestead property now serves as an operating office and pastures for cattle; it also holds machine sheds and two residences.

The Wilson Family Farm was established in the 1800s, and moved to the present homestead in 1912. The land is currently worked by family that includes 5th generation farmers. Don and Irene Wilson have been married 60 years. While they both still enjoy being part of the farm, their oldest son, Jim, oversees the management of the Wilson Family Farm.