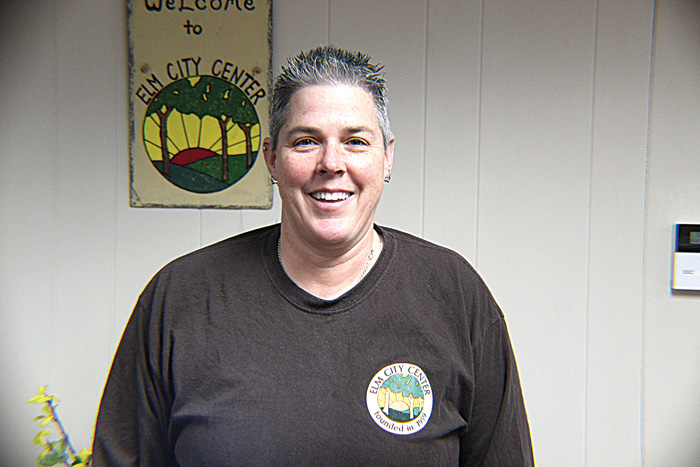 Mari Anna Gosnell has been living in Jacksonville for the past 31 years, a chapter in her life that began when she moved here from her hometown to work at the Elm City Center. Gosnell was raised about 150 miles south of here in a small town called Lawrenceville, where the job field was scarce. Thankfully, a friend from college reached out to her and told her to and apply to Elm City Center. Hired, she started out part-time and eventually worked her way up to be the coordinator of community day services. Loving her job, Gosnell considers her coworkers her family. If not with her work family, Gosnell is usually spending time attending events at Routt Catholic High School or taking her motorcycle out for a cruise. If it’s not riding weather, Gosnell will typically be relaxing with close friends and family or one or more of her six cats. When asked what she’d do if money ceased to matter, Gosnell believes that it would become hard to keep track of her, because she would be doing whatever she wanted to do, whenever she wanted to do it. If it’s in the fall, it will probably have some relation to football, since Gosnell is a fan of the sport. When questioned about what three books she would bring with her on an island to keep her company, her first pick was an open-ended answer of “any book about Joe Montana, the greatest quarter back ever,” followed by a picture book about LEGOS and “A Taste of Heaven Cookbook.” Family for Gosnell is very spread out, her mother and father still live in her hometown in southern Illinois, while her sister lives in Houston and her brother resides in Evansville, Indiana — which explains why she turned down having a super power when questioned about what power she would like to have and opted for having Wonder Woman’s Invisible jet. That way no matter where she wanted or when she wanted to go, she could just hop in and fly off. If you want to tell Gosnell hi, stop on by the Elm City Center and say hello.