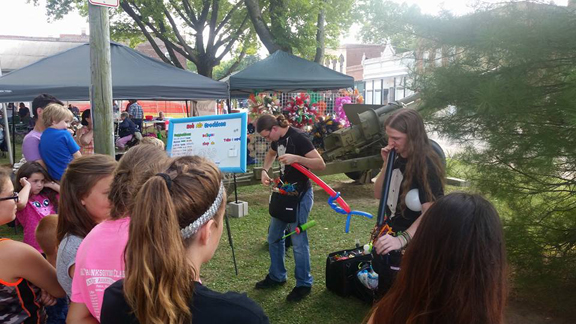 When it comes to balloon creations, what do you picture? The one-balloon dog, right? Well, if you talk with Trey Eilers, co-founder of Hot Air Creations, you’ll find out that he and his business partner, Scotty Harris, absolutely refuse to make those because, in their own words, “it’s too simple.”

Together, Eilers and Harris are turning a stereotypical carnival freebie into an impressive art form and business. But that wasn’t their original intention. It all started two years ago as a practical joke. Eilers, with the help of his friend, filled his girlfriend’s dorm room with 800 balloons. It was a fun prank, and after finishing it off, they thought no more of it.

Then, one week later, Harris got a call requesting that he help out with inflating balloons for a charity event in a local park. Harris got in touch with Eilers but was told, “No way, man, that’s boring.” So they decided to do a little more than just blow up balloons. One week before the event, they had some fancy supplies in hand, but no idea what to do with them.

Skimming through dozens of YouTube videos, they thought, “We’ll be the lame group there,” thinking that at the event, they would be inflating their balloons right next to individuals juggling fire and doing other exotic things.

But at the event, crowds lined up to have Eilers and his partner twist balloons for them. Looking back, Eilers shared, “It was completely chaotic and crazy in a great way. We were the hit. It was just unbelievable.”

That was October 11, 2014. Today, Eilers and Harris are the owners of Hot Air Creations. Using balloon twisting, juggling and comedy, these guys bring life, creativity and uniqueness to any event. From birthday parties, fundraising events, restaurant’s family/kid nights and more, Hot Air is quickly becoming a highly sought-after local business.

“People haven’t seen that type of stuff around here – it’s fun to get the amazing reactions,” said Eilers. Many of their onlookers declare in amazement, “We had no idea balloons were able to do that!” Eilers continued, “We often get told that we do magic.”

For now, Eilers says, “We’re part time, we take things as they come.” But if business continues at its current pace, they’ll soon be looking at being full-time balloon artists. And rightly so, ‘cause when it comes to mastering a craft, these guys have got it!

To book Hot Air Creations for your special event, contact them at the information provided below: