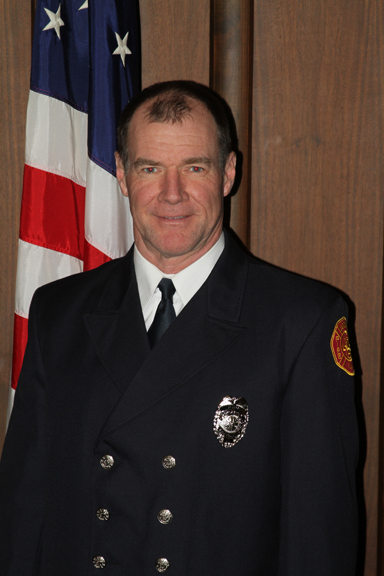 Three … two … one … go! If you are or asking yourself, “go where?” prepare to be motivated to move to a local box (a gym to the non-CrossFitter). “Three, two, one, go” is the starting sound of the many who have succumbed to the CrossFit community. I know you have heard mention of CrossFit; maybe you have a friend that obsessively talks about the many workouts and their new Box family that they want you to meet, or maybe you have found humor in making fun of CrossFit. There are many e-cards that will make even the most passionate of CrossFit roll on the floor laughing. Whatever the case, CrossFit has become a common part of the fitness community vernacular. Thanks to Greg Glassman, the founder of the CrossFit games, the games have grown from a 50-person cookout at a ranch in California, to a global competition with almost a quarter million participants. The growing sport has caused boxes to sprout up around the nation at a rapid rate.

In 2006, Jacksonville had no CrossFit boxes; now there are two CrossFit affiliate gyms along with the T3 training facility. Carriage House CrossFit was the first affiliate box to arrive in Jacksonville, opening their doors in 2009. Owners Natalie and Pete Lira have extensive backgrounds in fitness and competition. They pass their love of health and fitness down to their athletes. It is a welcoming fitness facility founded on faith and family. 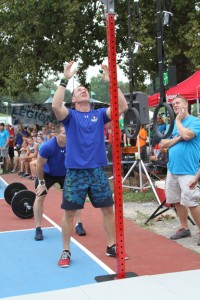 A member of the Carriage House Family is now competing in the CrossFit Games. Stephen King started at Carriage House in 2013. As a Fireman, King always made health and fitness a high priority. King said, “Who would want to see the non-athletic version of me trying to save a wife and kids? I wouldn’t.” A regular member of a gym, King remembers bench pressing over 350 pounds at his peak. When his friend Jo Campbell convinced King and fellow firefighter Curt Rueter to try CrossFit, they were hooked. “It took 1 WOD [Workout of the Day], and I haven’t stopped yet.” King competed in the 2014 CrossFit open, an international competition presented in an on-line format by Reebok. After being a part of CrossFit for less than 6 months, King finished in the top 20,000 competitors in the world. The following year, in 2015, King improved and finished in the top 15,000. More importantly, King finished in the top 100 in masters, the CrossFit group created for competitors ages 40 and up. In 2014 and 2015, King competed in the 45-49 age group. The top 100 finish in 2015 was quite a thrill for King, but the excitement heightened when Rueter reminded him that in 2016, King would be competing in the next decade, as the games are determined by the athlete’s age at the time of the games, not when games’ qualifying begins in February.

This put King in a unique position at the end of the 2015 open. He was a top 100 master’s athlete and among the top 15,000 competitors in the world. All of this with only two real years of CrossFit experience. With positive support from his wife Vicki and other encouragement from Campbell, Rueter and the entire Carriage House family, plus the confidence from his most recent finish, King made it a personal goal to work/train hard enough from the end of the 2015 open to the start of the 2016 open to place himself in a position to qualify for the CrossFit regional. 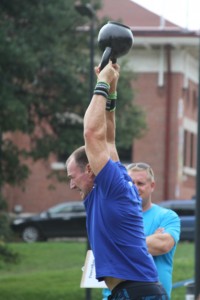 The 2016 open lasted 5 weeks, with each week bringing a new Workout of the Day (WOD). The athletes received the workout on Thursday night and had until the following Monday to complete the workout and submit their score. Regular athletes like myself are judged by an owner/trainer like the Liras. A highly-skilled athlete like King will still have a judge for validity and reliably when completing his WOD. However, as an extra measure of proof of score, a video was recorded of his WODs. After finishing the 2016 open inside the Top 100 Masters Athletes aged 50-54, King had to submit one of his recorded WODs (Reebok selects which WOD is submitted) to the CrossFit Game Headquarters. After the score was verified, he was entered into the Masters Regionals. The regionals consisted of a series of WODs over a 4-day period in April. The top 40 regional Master athletes qualified for the CrossFit games held annually in Carson, Calif. The regionals were an electric weekend for King and all of his Carriage House Family, at the end of the regionals, King finished 11th out of 100. This feat sends King, along with his family and friends, to Carson, Calif. to make his claim as the fittest man on the earth. The competition will run from July 19-21. In spite of the difficulties of this task, there is a great belief that the weekend will end with King on the podium. Congratulations Steve King!

From Stephen King: “I would like thank some people that without their help and support I would not have gotten to compete at the games. Pete and Natalie Lira for teaching and training me the correct techniques and skills to be a good crossfit athlete. Curt, Jolene, Joe, Matt, Ricky, Nick, Beth Kershaw without their tips and pushing me to my limit, I would not have gotten to the games.  To family and my Carriage House family for supporting and believing in me. A special thanks to Curt Reuter for not only being a great friend, but an amazing coach and workout partner. He did every workout, the planning on how I should attack every workout and then pushed (yelled) me through the workouts.  My wonderful wife Vicki for supporting me and allowing to be away at the box training a lot.”