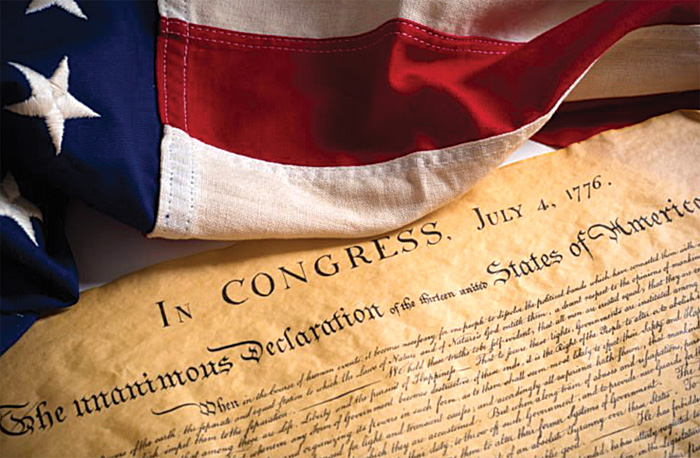 Most of us were born in America, free to make our own choices, free to live without the government dictating our lives. We are free to work, speak, hope and dream. We rarely even think about the fact that there was a day in America when you couldn’t live without the government dictating your everyday life. If it were not for a small band of passionate individuals, that would still be the case today.

America was born 243 years ago, when the people of 1776 cried out for freedom. They craved to be free to speak, hope and dream. They longed for their children to know a country where they could live without the government dictating their lives. If it cost them everything, they wanted to die knowing that the next generation would live in freedom because of their courageous commitment.

Citizens hear: never underestimate the power of one man who is willing to speak, fight and die for his words. Speak, fight, die — that is what was pledged on July 4, 1776. Before the dawning of that day, one man spoke in the Virginia House of Burgesses — a man who has been called the “trumpet of the American Revolution.” The words Patrick Henry said in 1775 have echoed in the hearts of every enslaved soul through the ages. In his speech to that body, he said seven powerful words: “Give me liberty or give me death!” In those words, he waged war against tyranny and the greatest empire on Earth, summing up mankind’s quest for freedom and committing himself to its immortal cause.

In 1776, 56 men gathered in Philadelphia to put action behind Henry’s words. To them, the choice was clear: they would rather die fighting for freedom than to live as slaves. They knew the decision they made wasn’t just for them; it was for their children, grandchildren and every succeeding generation. As British soldiers neared American ports, the patriotic delegates made their choice. They knew they had one more chance to speak. They knew King George would readily kill them for their stand. But they also knew, in that moment, they were responsible to future generations for whether they spoke or kept silent. If this was the last time they could take a stand, they, like men, would stand, and if necessary, die for the stand they took.

The vote for independence was taken, each colony voting for freedom. Each man pledged every earthly possession he had to the cause, including “his life, his fortune and his sacred honor.” There was no looking back. Once the vote was taken, they were committed to liberty and possibly death. John Hancock, the president of the Continental Congress signed the document in a bold, clear hand. It was done. They had taken a stand for the world to see. They could die for freedom with no regrets.

For the 56 signers of the Declaration of Independence, their lives would never be the same. Those 56 men funded the war, and years later, many died homeless while having suffered great loss to their families, their health and their land — all because they chose not to sit by in comfort and let freedom be stolen from them. As humans, they embraced their right to freedom, and with that, they embraced their responsibility to speak and defend freedom.

They had no regrets for their losses; each wished they could’ve done more. Nathan Hale, a young American spy stated before he was hung at the hand of British soldiers, “I regret that I have but one life to lose for my country.”

In 1783, our founding fathers secured freedom after a long and brutal fight. They didn’t ask for a reward. They only asked that we make good use of our freedom. That we don’t forget their struggle or sacrifice. That we speak and stand. That we remember our responsibility to our children and our grandchildren and succeeding generations. We are Americans — therefore, we are free. As free men, we have a duty to stand for freedom. If the 56 signers of the Declaration of Independence could speak to us today, they would ask that when we are called to take a stand, we would not be content to sit by, but heed their example and boldly proclaim, “Give me liberty or give me death!”

For a perfect fit to your patriotic plans for the 4th of July, read the real Declaration of Independence at www.ushistory.org/declaration/document.