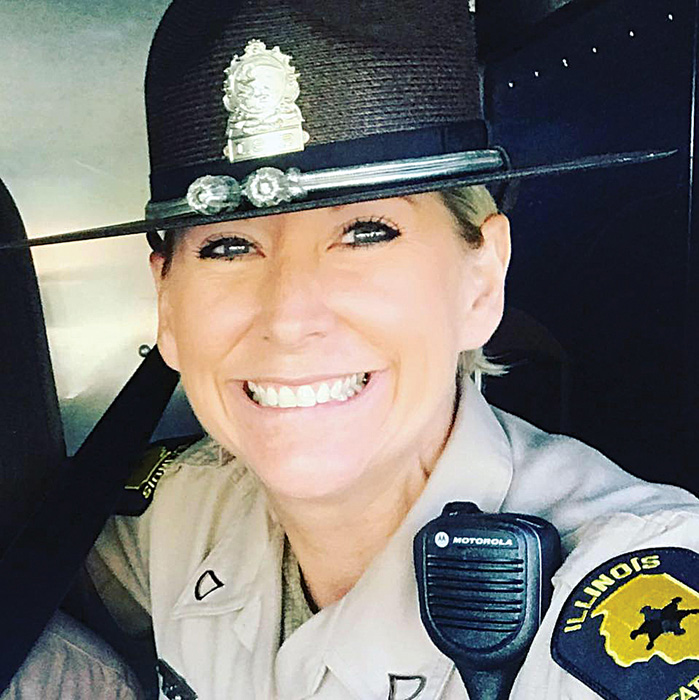 Social media can have many positive uses. If used correctly, it can be used to help spread information to people in a rapid manner. The Illinois State Police have used that tool and Trooper Tracy Lillard, “Trooper Tracy,” also fondly referred to as Mama Bear, to spread their words.

In 2016, Trooper Lillard started a Facebook page for the Illinois State Police District 10 in Pesotum. The page very quickly grew to 50,000 followers. She was incorporating the page with her safety education position in the district to share emergency information, provide safety tips and interact with the public. All part of the continuous efforts of the Illinois State Police to interact with the public. Lillard also created a page for K9 Yadi and K9 Edo, the working dogs of District 10.

The success of these pages, namely the enormous following, drew the attention of the leadership of the Illinois State Police. They saw the importance of building a social media presence. They decided to create a new position within the department, specifically a statewide social media coordinator. In September 2018, they selected Lillard for that position. Her feet haven’t hit the ground since that time. Lillard has grown the page from 60,000 followers in August 2018 to 158,000+ followers currently. “I post multiple times a day and the posts range in topics that may be informative, educational, serious, funny, lighthearted, and sometimes extremely sad,” stated Lillard. Her efforts are also directed towards Twitter, Instagram, additional Facebook pages and Snapchat.

In creating the page, the primary goal was to show the world that police officers are human. They have families, they cook supper, they balance work and home, they go to ballgames, they help their kids with homework and more, just like many others; they just do these things in between being on duty in a very demanding career. “Demanding not only mentally, but emotionally, and sometimes physically,” added Lillard. “At the end of the day, I want people to realize we are here to help. We put on our uniforms every day and want to make the world a better place. We want to serve. We want to protect. We want to come home after our shifts just like everyone else.”

One of the biggest challenges facing law enforcement today, in Lillard’s opinion, seems to be distracted driving. Cell phones, tablets, computers, watches and other electronic gadgets have taken over people’s lives when they are driving on the highways. “A lot of drivers think the time behind the wheel is to multitask. That inattention has directly resulted in the unnecessary loss of lives,” commented Lillard. “The public can help by putting their electronic devices away while driving and focusing on the road.” One goal as an Illinois State Trooper is to enforce the laws in a positive way. “We will continue to educate the public (especially on social media platforms) that the police are here to help them,” added Lillard.

The inattention behind the wheel has increased violations to Scott’s Law, or the “Move Over” law, not only in Illinois, but also nationwide. A lot of things have been contributing factors: speeding, driving under the influence of drugs and/or alcohol, improper lane usage, drowsy driving, distracted driving or aggressive driving, just to name a few.

On a personal level, Lillard is married to a sergeant with the Illinois State Police K9 unit, involved with a lot of drug interdiction work. They have three daughters, ages 13, 11 and 7. Their family lives on a farm across the cornfield from her parents, which comes in handy with their hectic work schedules. “It is important to separate home and work the best we can,” remarked Lillard. “We enjoy the outdoors with the family and taking the backroads in our Jeep with the top down, enjoying the scenery.” Interestingly, their marriage may have been foreshadowed, for when Lillard was in fifth grade, an Illinois State Trooper from the K9 unit came to her school. In fact, it was that night that she told her parents she wanted to go into law enforcement … and has spent 18 years doing just that.

In closing, Lillard appreciates all of the kind words that their department gets daily on their social media platforms. “The support and prayers the public extends are truly humbling. We have noticed more and more people coming up to officers when in public, thanking them for their service,” remarked Trooper Lillard.