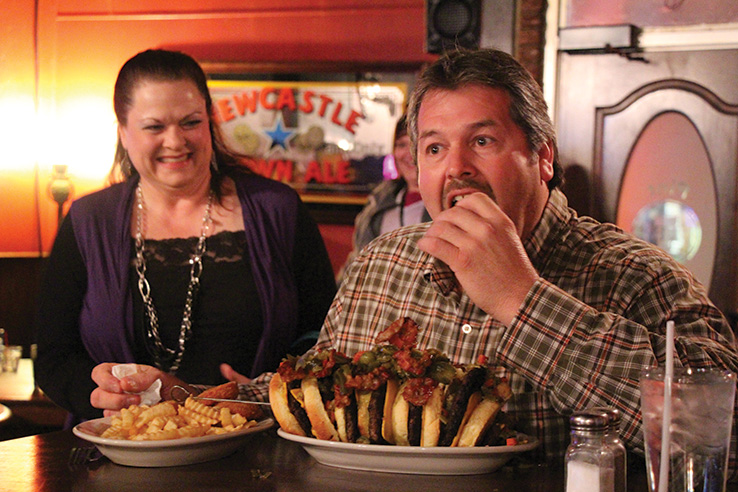 People celebrate birthdays in different ways, but for recent birthday guy Brian Fitzjarrald of Griggsville, it was a celebration of food. Fitzjarrald spent the evening memorializing his 48 years on Earth with family and friends, and — the Challenge Burger! When you see this sucker, I feel like Tchaikovsky’s 1812 Overture or maybe The Imperial March from Star Wars should be playing so that an equally powerful audio meets the intimidating visual in front of you. The Challenge Burger is cooked up at Abigail’s Grill (the restaurant within KJB’s Pint Haus) and consists of: 3 ½ pounds of seasoned beef, 12 slices of cheese and 6 slices of bacon, all served speared on buns with onion, tomato, giardiniera (that’s a type of pickled relish, fyi), jammin’ jalapenos, breaded onion rings and a side plate of French fries. The challenge runs $50, but only if you don’t finish; if you finish it in 50 minutes, you receive a free t-shirt, your name on the wall of fame and the Challenge Burger is free! (Good luck with that.) 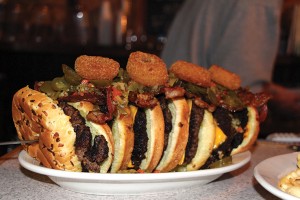 Photo/Kyla Hurt
Pictured above is KJB’s “Challenge Burger.” Not shown are the french fries that accompany the meal.

A friend of Fitzjarrald’s told him about this culinary monstrosity earlier this summer and Fitzjarrald knew it was for him. Last year to celebrate his 47th birthday, he tackled a 6 pound horseshoe at Sawyer’s Creek in Hannibal, which was appropriately named “The Clydesdale.” Fitzjarrald says that this sort of eating contest or challenge is what he wants to continue to do on each upcoming birthday. So, friends and family from Jacksonville, Pittsfield and Griggsville gathered at KJB’s Pint Haus to witness the face-to-face. It was man vs. Challenge Burger. Fitzjarrald was a bit leery about this challenge; when I questioned his level of confidence, he responded, “I don’t know. I’ve got my mind set I’m going to be able to do it, (insert some hesitation here) but there’s twice as much meat on there.”

In preparation for the Challenge Burger, Fitzjarrald ate a small dinner the night before and consumed only coffee and scrambled eggs the day of the food challenge. While he and his wife were in Jacksonville, she hoped to go grocery shopping, but Fitzjarrald quickly counteroffered with any other option but that to continue his birthday celebration after the mass meat consumption, explaining, “I don’t think I want to look at food!” Fitzjarrald wore a brave face as he started deconstruction and digestion of the plates before him. Midway through, however, he commented that “it’s getting bigger.” Then, at 15 minutes left on the clock, he was shaking his head ‘no,’ wiping sweat from his brow and patting his belly; Fitzjarrald had come to the realization that he’d be shelling out some cash for this birthday dinner. He threw in the towel. He gave up. He was kaput. Though defeated in the end, Fitzjarrald put up a good fight against the Challenge Burger at KJB’s Pint Haus’ Abigail’s Grill. On a positive note, it was an entertaining birthday event. Plus, he’s got a whole year of food training to go before he chooses his next food challenge.