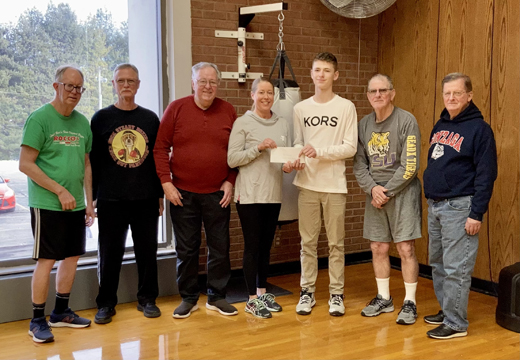 Jacob Kollman, a 15-year-old sophomore at Westfair Christian Academy, arrived at the Bob Freesen YMCA at 3 p.m. Friday, March 11, with his mother Cathy, to present $600.00 to the Rock Steady Boxing program.

He had raised the funds to give to the program that assists people in their fight against Parkinson’s disease. This wasn’t the first time Jacob Kollman took on a fundraising project, but this time it was especially personal.

Kollman’s dad, Jason, was diagnosed with Parkinson’s disease (PD) in August 2021. The family said it had been since 2020 when the COVID-19 shutdown began that Jason Kollman started really noticing tremors and extra soreness.

His wife, Cathy, says her husband has taken on different projects for years. “He usually doesn’t like to talk about it,” she says, but in this case, he knows how important it is to get information out on Parkinson’s. She says, “We didn’t know much about it before my husband was diagnosed.” So, they had to do research and learn. Jason Kollman has the tremors most people associate with Parkinson’s, but as their son, Jacob, spoke to the Rock Steady group, members spoke up and said some of them didn’t even have tremors. Each case is very individual they all understand. One lost his voice for three months, one said he just had balance problems and walking with a shuffle and another had issues swallowing. Symptoms of Parkinson’s can be very wide-ranging.

Jacob Kollman, who runs track and plays basketball at Westfair Christian Academy, is over six feet tall. His mom says she doesn’t know his exact height right now because he has grown so much in the past year. After he found out about his dad’s diagnosis and with his interest in basketball, Jacob Kollman discovered the Bryan Grant Foundation’s Points for Parkinson’s challenge on Facebook and thought that would be a great project. Thanks to his initiative, he and those to whom he reached out did a fantastic job with the challenge.

The Bryan Grant Foundation is an organization formed by an ex-NBA player who was diagnosed with Parkinson’s disease at 36, not long after he retired from the game. The foundation focuses on exercise, nutrition and a supportive community to help manage symptoms, maintain overall health and prevent other serious illnesses — as there is no known cure for PD at this time. Kollman posted a video on Facebook in which he said, “All you have to do is shoot your best basketball shot and then donate to the Brian Grant Foundation and post it on social media.”

He explained that people could do it individually or as a team and could even call someone else out to complete the challenge. He emphasized that no donation was too small. Kollman said he had a dual purpose for all of it — both to raise money and to also raise awareness of Parkinson’s disease. Jacob Kollman raised $550.00 for the Brian Grant Foundation this way.

Once he had reached his deadline and donated to Points for Parkinson’s, he didn’t stop. His family moved to Jacksonville not long ago, and their neighbor from their previous home in Winchester, Terry Aossey, has Parkinson’s disease. Well, it turns out Terry and his wife, Carol, are regulars at the Bob Freesen YMCA’s Rock Steady Boxing classes and have found that attending the class regularly really helps him walk and move better. So, Jacob Kollman has not only raised money for the Rock Steady Boxing program, but he has also been encouraging his dad to join the program this summer. He says he plans to get his license and can even drive him to classes.

His mom, Cathy, says of her husband, “Jason has discovered when he doesn’t move on a regular basis, he is more sore and stiff and then has a harder time sleeping, too. He is now looking into changing his work schedule this summer to attend classes. We have seen how much it has helped Terry.”

If you or someone you know has PD, they can fight back by coming to Rock Steady Boxing classes and hitting Parkinson’s where it counts! Great job, Jacob Kollman!