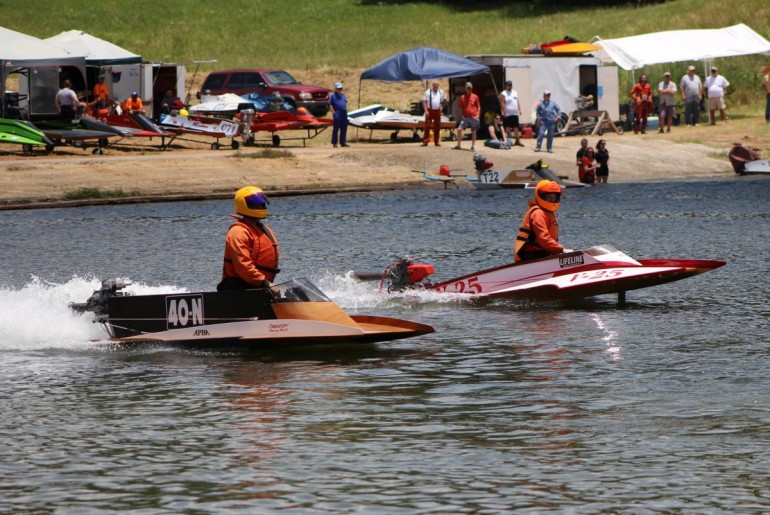 On the weekend of September 19 and 20, Lake Jacksonville will play host to the National Boat Racing Association’s (NBRA) short course regional championship, with some of the country’s best outboard boat racers competing for a $7,500 prize. After a decades-long hiatus, 2015 marks the third consecutive year of NBRA competition at Lake Jacksonville.

Jacksonville’s own Tom Winner, who’s been instrumental in the organization process required for hosting an NBRA event, recalls watching boat races as a young boy. “It goes back quite a long time ago, back in the 40s and 50s, when they used to race on Lake Mauvaisterre,” Winner said of his involvement with boat racing. “Several years ago, I went to an NBRA event in Centralia, Illinois that only charged a dollar for admission, and I thought that I’d like to have something similar in Jacksonville; something that was affordable and open to everyone.”

Although the first race is scheduled to start at 12:30 p.m. on Saturday, September 19, most of the racers will make a “test and tune” run – where the crews can get a feel for the course and the boat and, if necessary, make adjustments accordingly – on Friday afternoon. Following Friday and Saturday, races will again commence around 12:30 p.m. on Sunday. Racing teams for this event come from approximately ten different states, including several racing families from western Illinois and eastern Missouri. Along with the $7,500 prize, the races will count towards to NBRA’s 2015 Points Chase, where driver are awarded a certain number of points based off of their finishes throughout the season. Depending on the size of the course – the longer the course, the faster the boat – racing boats can reach speeds anywhere between 50 and 65 miles per hour.

“It’s a very colorful sport, and the boats are just so extremely fast,” said Winner, speaking on the excitement of racing. “The NBRA has several young women as well as young men that drive, some are even second, third or fourth generation racers, the sport having been handed down to them from either their parents or grandparents. What I love the most about boat racing is that it’s just a wonderful, family-oriented sport.”

Aside from the racing, Saturday will feature a ski expedition put together by the Holiday Shores Ski Club starting around 3 p.m., with a musical performance by Robert Sampson to follow. Each day, a number of food vendors will be stationed near the boat dock area, providing food and drink for the audience to enjoy while watching the races. Admission to the event is free for all ages, but if you’re feeling lucky, several individuals will be selling 50/50 tickets. The 50/50 drawing will award prizes for first place (receives half of the money), second place (a 60” flat screen TV), and third place ($150 worth of groceries at Jacksonville’s County Market). Spectators WILL be allowed to bring their own coolers and refreshments.

“We would like to thank all of our sponsors for this event; without them, none of this would’ve been possible,” said Winner. “This is something that we’d like to continue for years to come; it’s a great family atmosphere and a nice way for the community to come together.”