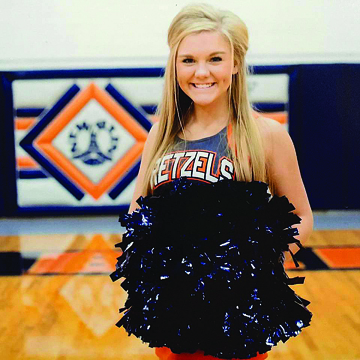 Jim Allmon is no stranger to the difficult task of knocking on the doors of families at all hours of the day and night to deliver the worst news of their lives — that a loved one has died. He has been employed at the Sangamon County Coroner’s Office since June 2003. He served as Deputy Coroner for 10 years, was promoted to Chief Deputy Coroner in 2013 and was elected as County Coroner in 2020.

But nothing could have prepared Jim and his family for the devastating call they received on May 7, 2017. At approximately 8 a.m., Allmon, who was on call, received what appeared to be a routine call from his office reporting a two-car accident with one fatality not far from his home.

Minutes later, as he prepared to head to the crash site, he received a second call from a colleague attempting to dissuade him from reporting to the scene of the accident. Almost simultaneously, his wife, Courtney, received a call from the Illinois State Police informing her that Madeline “Maddie” Finch, her 16-year-old daughter and Allmon’s stepdaughter died in that accident.

Finch, a junior at New Berlin High School in New Berlin, Illinois, was headed to the home of her father, Richard Finch, after prom night celebrations, when she fell asleep at the wheel, crossed the median and collided with a semitrailer truck, dying instantly.

The state police investigation and the coroner’s autopsy report concluded that Maddie was not texting and driving, under the influence of any illegal narcotics, or drinking and driving. She was driving while tired. A witness who had been driving behind Maddie reported to the police that she observed from a distance that Maddie apparently drifted off and woke up a couple of times, causing her to weave back and forth from the centerline until she completely crossed it.

“She never felt the impact at all; she never saw it coming,” Jim said. “She was asleep. She never even applied the brake. I have never been through anything like this personally. The first two months (after we lost her) we all felt like we were living in a snow globe, like it was a terrible nightmare and we were going to wake up.”

The day before Finch’s fatal accident, Jim stood in front of the New Berlin High School student body and talked to them — as he had done on many occasions during prom night crash reenactments — about driving responsibly. Finch even playfully participated in the demonstration.

“I stood in front of the entire student body and gave my usual spiel,” Allmon said. “Maddie, our family comedian who was in the audience, playfully asked how long I’d been a chief deputy coroner and a couple of other questions. I let the students know she was my stepdaughter, answered her questions and gave her a big hug goodbye. The irony behind Maddie dying the next day after attending her prom — well, I have a better chance of winning the lottery than of having something like that happening, but it happened.”

A beacon of hope

As Allmon shared the devastating news with his parents, he suddenly thought about donation as a possible option for his family. Through his experience working with Gift of Hope, Allmon knew that Finch might be able to donate and help others. He quickly contacted Roy Mayfield, Manager of Tissue Recovery Services at Gift of Hope, to make sure the time frame was still suitable for tissue donation before taking the idea to his wife.

“I probably scared the heck out of Roy,” Allmon said. “I was freaking out, but when he told me that we could still help, I dialed Gift of Hope’s 800 number to which I’ve reported so many other deaths. Then I approached my wife to have what I thought was going to be the hardest conversation we’d ever had. I told her, ‘I think we can help. I don’t know if this is going to make it better, but there is still time to donate. You know there’s a long list of people who can benefit from this decision.’ Courtney didn’t bat an eye. She said yes almost immediately.”

Finch became a tissue donor, offering 122 bone grafts. Her tissue gifts have saved and enhanced the lives of transplant recipients who live as close as Springfield, Illinois, and East Peoria, Illinois, and as far away as Pennsylvania and the island city-state of Singapore.

Another light shone brightly during Finch’s funeral service after a menacing storm began making its way through New Berlin and near Berlin Christian Church, where her services were held. A dark sky, pouring rain, hail and violent winds confirmed reports of a tornado touching down near the church. The pastor announced that they might all need to seek shelter, but he powered through the service. Just as the service neared its end and Finch’s favorite song began to play, the storm cleared, and a double rainbow appeared over the church. “We all stood as a family and walked over to the windows,” Allmon said. “And after that threatening darkness, it was so bright. I remember Courtney standing in front of me, and she turned and looked at me and said, ‘She’s OK. She’s OK.’”

In the weeks and months following Finch’s death, Allmon wasn’t sure how the devastating loss would affect his work, but he realized that it gave him a deeper understanding of the experiences of the families he serves. He’s also gained a different perspective about the healing benefits of organ and tissue donation and the important role his office plays in offering the opportunity for donation to grieving families. Allmon, a registered organ and tissue donor, has been an advocate of donation for years. He works with pathologists three or four days a week and has seen the positive impact of donation firsthand. But he also recognizes the additional effort that goes into making donation happen.

“We get calls from Gift of Hope often throughout the night, and sometimes these calls wake you up at 3 a.m.,” Allmon said. “It’s a lot of extra work, and sometimes it’s frustrating, but I’ve always believed it’s worth it to extend that opportunity to families and let them make a decision. Now I’ve literally been right where families who decide to donate have been. I can tell you it’s [donation] a beacon, the one light during the darkest time and an opportunity to help other people who are waiting for organs and tissues and offer them some hope.”

Allmon and his family continue to celebrate her life and honor the gifts she offered to others in need. Finch was a dedicated, straight-A student and a cheerleader. In her honor, her family established the Maddie Finch Memorial Scholarship Fund to support the educational goals of senior year cheerleaders at New Berlin High School.

“Maddie was loved by so many people,” said Allmon. “When she died, we received an outpouring of moral support and several monetary donations from so many generous people. We just wanted to give back in some way, so we set up the memorial fund in her name.”

The first large-scale event to raise money for the Maddie Finch Memorial Scholarship Fund was held at Brookhills Golf Club in Springfield, Illinois. More than 140 golfers, including Gift of Hope staff members, teed off in support of Finch and her family. Event sponsors and supporters helped to raise $9,000 in scholarship funds for the first year.

“We had never planned a golf outing, but the response was remarkable,” Allmon said. “It was the largest golf outing that Brookhills has ever had. The entire community showed up, a community that has been with us since day one and has lifted us up and carried us through it all.”

Adjusting to life without Finch and finding a new normal has been difficult for Allmon and his family as they struggle to fill the void she left in their home and hearts. Finch had a strong faith, enjoyed being outdoors, was a Cubs fan and adored dogs, especially Labrador retrievers. She talked about someday becoming a nurse, but her family often wondered if she’d become a veterinarian instead.

Helping others came naturally to Finch, who was inherently compassionate and kind. Allmon and his family are doing their best to honor Finch by trying to live and enjoy life as they all know she would want. “The void in our home is palpable,” Allmon said. “Maddie was one of five girls that my wife and I had. We were and are a blended family. My girls and I were around Maddie for half of her life, and we all miss her terribly.”

Allmon is now committed more than ever to continuing the work to increase awareness about the life-threatening dangers associated with distracted driving and driving under the influence. The annual prom crash reenactments that he continues to be part of now include Finch’s story.

“We’ve talked a lot about distracted driving and about driving under the influence of drugs or alcohol, but we’ve not once talked about tired driving,” said Allmon. “These kids are up for hours getting ready for prom. Then they go to prom, and many of them attend the after-prom event where they’re safe. But then they have to drive themselves home. Some kids have 15-minute drives on country roads. We now include the equally important topic of tired driving in these events.”

Jim, Courtney and their family have shared Maddie’s story many times, and each time they punctuate it with Maddie’s gift of tissue donation. The opportunity for donation offered Maddie’s family and loved ones a glimmer of hope and light during their darkest time.