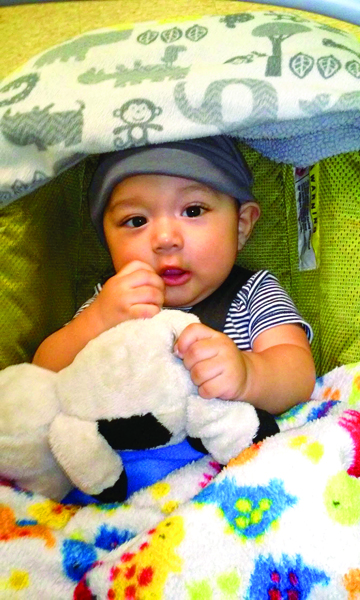 On the afternoon of July 22, 2016, Alberto Bahena answered a distraught phone call from his ex-wife, Cristina Martinez.

Their two-year-old son, Xavier Bahena was struck by a car outside of his mother’s family’s restaurant. Alberto was working three blocks away and ran to the scene of the accident to find that first responders were transporting Xavier to John H. Stroger Hospital.

“An extremely independent little boy who loved to help,” is how Bahena describes his son. Keeping that helpful spirit alive is what Bahena had in mind when he asked about organ donation after doctors explained that they had exhausted all efforts to save Xavier’s life.

“When I was 13 years old, I was away at a group home where I met and spoke to people who had received, or whose family members had received organ transplants,” said Bahena. “I was young at the time, but those conversations made sense to me. It’s about helping someone else who needs it.”

Bahena and Martinez discussed donation and the difference it could make for others and agreed that it was the right thing to do. By authorizing donation on behalf of Xavier, his parents made it possible for him to do what he loved — help others. Their decision changed the ending of Xavier’s story and saved the lives of a woman in her 50s, and two little boys who were only one and two years old at the time.

“It’s never going to be easy but knowing that other people are alive and healthy because he helped them, makes losing him more bearable,” Bahena said.

It has taken Alberto Bahena approximately three years to finally be able to talk about losing Xavier. As it happens to many parents after the loss of a child, Bahena became depressed and shut everyone out.

“When we lost him, I suppressed everything, pushed it back somewhere, and never spoke about it,” Bahena said. “I know now that I need to face it and figure it out. Instead of negatively dealing with the loss and trying to shut off all my emotions, I want to deal with it in a positive way.”

Although Bahena has not yet met the transplant recipients who received Xavier’s lifesaving gifts, he has started the correspondence process but is taking his time with it. He wants to make sure that the time is right. In the meantime, Bahena is now able to talk about losing his son and share special and memorable details about Xavier, like the special handshake they had when Xavier did something right or to greet each other.

“We’d high five, fist bump and then throw up the peace sign but Xavier couldn’t do the peace sign, so he’d just point his little index finger at his eye,” said Bahena. “He also loved music and singing. His favorite song was ‘When I See You Again’ by Wiz Khalifa; we had no idea when he first heard it, but he was always humming it and singing along.”

It’s the random times when Bahena isn’t actively thinking about Xavier and thoughts of him enter his stream of consciousness that are the toughest for him. When this happens, and his emotions begin to weigh on him, he thinks about the positive things that came out of the tragic loss and he has a message for other families who may one day be faced with the decision to donate on behalf of a loved one.

“If you’re faced with the decision to donate, know that you’re going to help somebody else. You’re going to have peace in your life because you also made the life and the loss of your loved one worth something. You’ll have some level of comfort knowing that they’re still here in a way and that someone else is alive because of them because we can’t be selfish. Your family member is gone but you can help someone else keep theirs.”