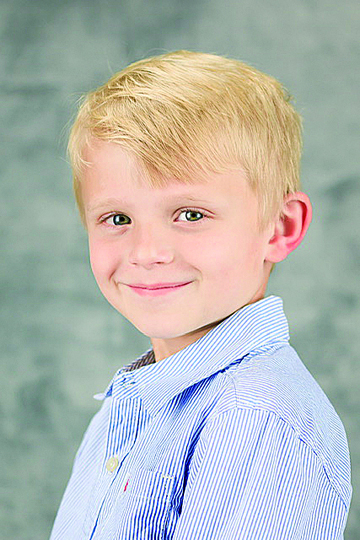 Organ Donation story (as told by his parents, Alicia and Brett Brockhouse):

From his day of birth, Asher started displaying symptoms of the disease. At seven days old, we received a call regarding his Newborn Screening results. He was showing signs of elevated leucine, isoleucine and valine — common elevations in classic MSUD patients. Immediately, we were called to St. Louis Children’s Hospital for further testing and evaluation by a Genetic Specialist.

By the time of arrival, Asher was experiencing obvious signs of dehydration and lethargy. Additional tests were performed and further evaluation was needed, so he was admitted for fluids until the testing resulted. The next morning, Asher was officially diagnosed as the first case of MSUD the hospital had seen in over seven years. Asher was immediately whisked away for treatment while we were explained the extent of his disease and diagnosis. This is when our organ donation story actually began …

At this point, we were informed that it was possible for Asher to live with this condition, as long as it remained under control and treated with a specific, down to the gram, diet that was developed by a Genetic Dietician on a daily basis. The only other life-saving option for Asher was the gift of a new liver — a liver transplant. For almost a year, Asher was in and out of the hospital with various childhood illnesses and elevated leucine — toxic to the body and brain. At 10 months old, Asher was admitted to the hospital for a stomach virus that had swept through our family.

On July 26, 2016 Asher went into cardiac arrest due to swelling of the liver and compression on the heart, due to multiple bacterial infections in his blood. Asher was further diagnosed with compartment syndrome and needed immediate surgery to reduce the pressure that his enlarged liver was causing other vital organs. Asher was given a decompressive laparotomy and spent the next 52 days in the Intensive Care Unit at St. Louis Children’s Hospital fighting for his life. His lungs collapsed the next week and he was placed on ECMO (Extracorporeal Membrane Oxygenation).

After three long days, Asher was taken off ECMO and continued to heal. His liver started to heal and his body was responding to the multiple antibiotics he was receiving, all the while managing his MSUD through special IV nutrition.

After Asher was released from the hospital in September of 2016 our organ recipient testing started. At the beginning of 2017, Asher spent three days in St. Louis undergoing extensive testing to determine his eligibility for transplant.

On July 30, 2017 Asher received THE CALL. We had a match for a new liver! We arrived in St. Louis around 8 p.m. and immediately started prepping for surgery. At 6 a.m. the following morning, Asher was taken to the OR to receive his new liver and a new chance at life!

Any other information you wish to share about Organ Donation:

Organ donation is truly the best gift you can give someone. The ability to gift someone a longer, better chance at life means more than words can express. Although words cannot begin to explain the amount of gratitude, respect, and admiration we have for the person and loved ones who decided to give Asher a second chance at life, we hope they can encourage more people to sign up to be an organ donor. #GiveLife