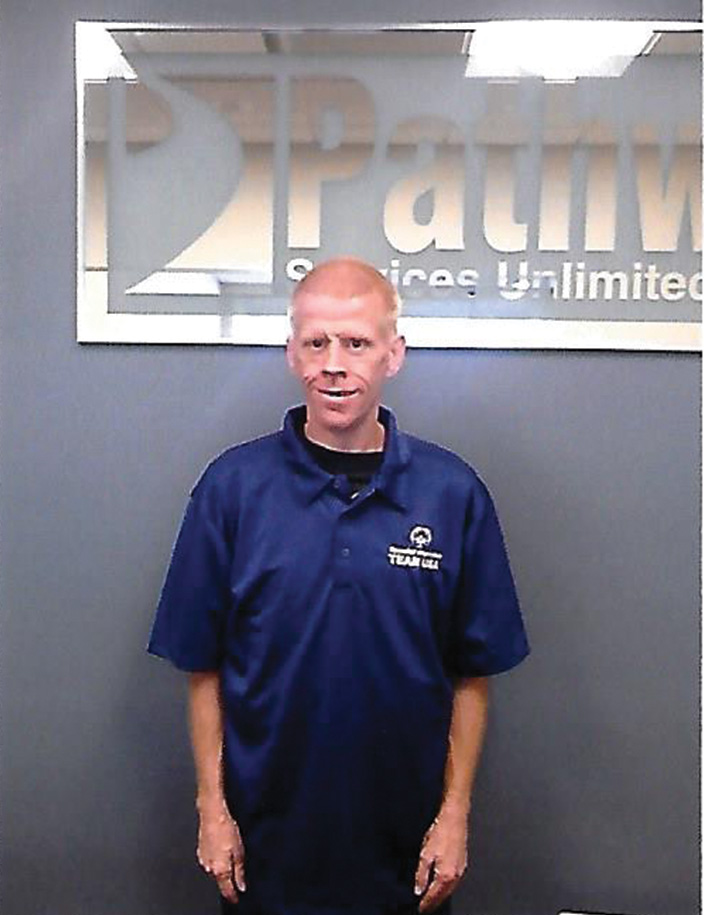 Kevin Bush, above, stands in front of the Pathway sign. Bush will be playing soccer in the 2015 Special Olympics in Los Angeles.

It all began in the 1950s and early 1960s, when Eunice Kennedy Shriver saw how unfairly people with intellectual disabilities were treated. She also saw that many children with disabilities didn’t have a place to stay. She decided to take action. Soon, her vision began to take shape, as she held a summer day camp for young people with disabilities in her own backyard. The goal was to learn what these children could do in sports and other activities and not dwell on what they could not do.

The mission of Special Olympics is to provide year round sports training and athletic competition in a variety of Olympic-type sports for children and adults with intellectual disabilities, giving them continuing opportunities to develop physical fitness, demonstrate courage, experience joy and participate in a sharing of gifts, skills, and friendships with their families, other Special Olympics athletes and the community.

Everybody is different. Special Olympics is for people who are different because they learn new skills slowly. They may not understand ideas that other people learn easily. Intellectual disabilities, or ID, happen in all cultures, races and countries. The goal of Special Olympics is to reach out to the 200 million people in the world with ID. More than 4.4 million Special Olympics athletes-ages 8 years old and up-come from more than 170 countries. At any age and in every country, our athletes are learning new skills, making new friends and gaining fitness and confidence. (Information provided by Special Olympics Official Site)

We all have certain goals in life that we set out to achieve. For Kevin Bush, that goal is to just do his best. Kevin will be playing soccer in the 2015 Special Olympics in Los Angeles, California. He spent five days in October of training in Indianapolis, Indiana. This is not Bush’s first appearance in the Special Olympics and it won’t be his last if he’s chosen again. In order to get chosen for the event, local coaches make nominations. Kevin’s coach, Richard Larkin chose two people from from this area, Bush being one of them.

Kevin doesn’t spend hours, days, weeks, months or years training, he just does a lot of walking. His favorite coach is Richard Larkin. He likes Richard because he’s good with people and treats everybody the same. Kevin also enjoys playing volleyball, basketball, bowling and softball. His hero is Mia Hamm. “I like the way she plays soccer, that’s why she’s my hero!” But, if Kevin had the chance to meet anybody in the world, it would be Kobe Bryant.

When Kevin’s not preparing for the Olympics or when he’s not working, he likes to watch movies and listen to music. He did mention that even though he does a lot of activities, he still has a lot of spare time!

But if  I Cannot win,

Let me be brave in the attempt!”

Good luck to Kevin and all the other athletes competing in the 2015 Special Olympics! You are all an inspiration!

View all articles by Robyn Mckinley