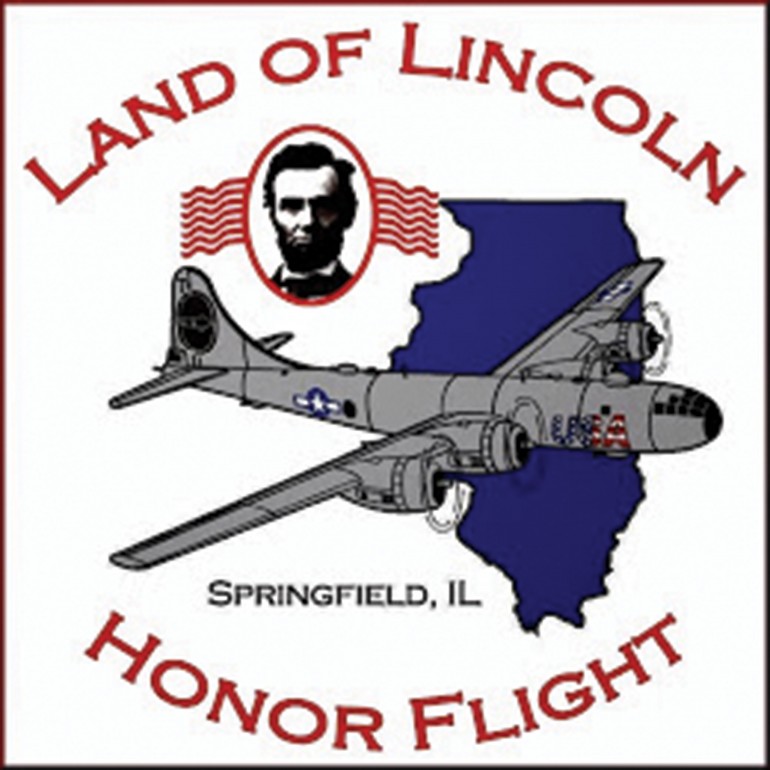 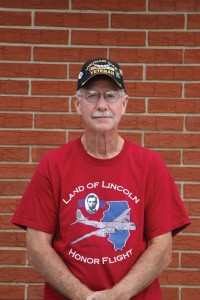 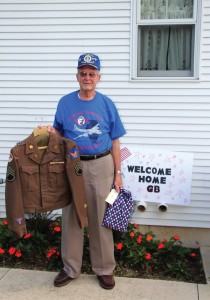 U.S. Army Veteran Leroy Garrison, (above), served during the Vietnam War and took part in an Honor Flight mission out of Springfield. On the same trip was Veteran Gerald “GB” Beard of the U.S. Air Force, shown displaying his “mail call” bag and original uniform coat, (right).

Each Veteran holds within him or herself a different story, but regardless of rank, branch or awards received, members of our military services deserve recognition. The Land of Lincoln Honor Flight (LLHF) is an organization with the mission “to provide round trip transportation from Abraham Lincoln Capital Airport in Springfield, Illinois, for Veterans in order of their service (WWII, Korean Era & Vietnam Era), who wish to visit their memorial in Washington, D.C. This day trip is provided completely free of charge to the Veteran in honor of his or her service to the country.”

Two local Veterans recently had the chance to take “One More Tour with Honor,” as they were 2 of 89 Veterans who took to the air on LLHF’s 27th Washington D.C. trip. Though each Veteran’s story of service differs, Veteran Gerald “GB” Beard and Veteran Leroy Garrison, of the U.S. Air Force and U.S. Army respectively, deserved this “tour to visit and reflect at their national memorials.”

Beard’s story began in 1944 when he graduated from Arenzville High School, already enlisted with the U.S. Air Force. He wanted to be a pilot and “wanted to fly one of the P-51 fighter planes.” Beard took his Basic Training at Keesler Field in Biloxi, MS, where he recalls intense training and times of “guys just passing out” on 10-mile hikes and how one time he was sick with pneumonia, but was “bound and determined” to continue even with his 105 degree fever. When it came time for Beard to take his exams that would qualify him as a pilot, he failed the depth perception test and says Beard, “That just broke my heart.” All he wanted was to be a pilot and he couldn’t due to something he couldn’t control.  Instead, he pushed on and attended “radio school” at Scott Air Force near Belleville, IL. Beard remembers learning Morse code and how the instructor would rattle the radiator in the classroom during teachings to train them to “pay attention to only the noises you need.” Even today, Beard will occasionally translate words into dots and dashes, as he says, “After 70 years, it’s amazing what sticks with you. I still have ‘da-da-da’ stuck in my head.” Beard ended up wearing a wool uniform as Staff Sergeant at Canadian Forces Base Goose Bay, Labrador. “All this time,” says Beard, “the war is going on. We were the northern route to England. It was US to Goose to England.”  Planes were landing or taking off every 30 minutes and Beard exclaims, “It was unbelievable what men got done – they were cleaning the snow off the runways non-stop.” The Jeeps would never shut off for fear that they would not restart in the freezing (as low as -50 degrees, he recalls) temperatures. Beard was in charge of the radio station, staying in contact with every plane by monitoring flights of wounded soldiers, troops going over and troops coming back. They proudly “worked the air to ground” of President Truman’s plane going to England, notes Beard. He was a part of the group that went with Bob Hope’s crew up to Greenland, and had the chance to meet Hope during Hope’s trip to put on a show in “the big hangar” for all the troops out there – “it was very exciting.” On February 20, 1947, Beard was discharged and the next week he was married. His thoughts regarding the war were that, “We wanted to go. We wanted to get in there and do our part.  When I look back, I had no fear about it.”

Also on the recent flight was Veteran Leroy Garrison of White Hall. Garrison was drafted into the U.S. Army at age 19 and sent to basic training at Fort Leonard Wood, MO. Whereas Beard’s service was during WWII, Garrison served during Vietnam – a distinct and unfamiliar type of war. Garrison graduated from boot camp on November 17, 1966, with a destination for helo training. He was shipped anywhere from Fort Benning outside Columbus, GA, as part of the 5th Transportation Group Motor Pool to the 271st Aviation Company at Fort Bragg in NC to work with “heavy-lift” helicopters – or to Fort Campbell located astride the KY-TN border. “We were all over,” noted Garrison, “we went to different places for different training.” By January of ’68, Garrison was an E4 or Specialist 4 and was introduced into the war by “baptism under fire,” he says. He was on his way across the Pacific in a Merchant Marine boat USS Upshur, along with “nearly 4500 guys in that boat,” on a trip that took “20 days.” Recalls Garrison, “It was an adventure just getting there.”  While some finally disembarked in Da Nang, Vietnam, Garrison was part of the soldier group that went on down to the mouth of the Mekong River and “were dropped in four feet of water.”  There was a “little kid from Brooklyn,” Garrison remembers, that “jumped off and you couldn’t even see him.” Garrison spoke of the heroism that surrounded him, and of the great men that he knew, adding, “You’re like brothers…you get pretty close.” There were vivid memories he had of being mortared, where “they threw everything but the kitchen sink at us.” He recounts feeling the wind off of the mortar hitting – and the terror of three men right behind him getting killed. “I’ll never forget it,” Garrison shook his head.  Most of his final time was as a crew chief and helicopter door gunner. There was so much fighting and so many lost; “The hardest thing was to leave. I wanted to get the heck out of there, but it was hard to leave the guys behind,” described Garrison. On April 28, 1969, Garrison was on his way home.

A significant distinction in military story between Beard and Garrison is evident, but the fact remains for both that they were deserving of their Honor Flight. Eighty-nine Veterans were on the June 10th flight, including 18 from World War II, 28 from the Korean War era, and 43 from the Vietnam War era. The flight also included two female Veterans, one from World War II and the other from the Vietnam War period. “It was long day, but it was a good day,” tells Garrison. In the airport before the takeoff, “there were people everywhere…waving flags, oh my gosh…a lot of tears. It was just wonderful, and we didn’t know any of them. Kids were coming up to us to shake our hands…it was just wonderful,” exclaimed Beard. The Veterans and their “guardian” were transported for the day on three tour buses with code names “Red,” “White” and “Blue,” noted LLHF. It seemed everywhere the Veterans went on the day’s itinerary resulted in hundreds of flags, people waving or thanking the Veterans, and genuinely reacting to the rare privilege of seeing the true heroic soldiers being honored. It’s a different time for Garrison – as “back in ’69, they saw a uniform and went out of the way to avoid you.” Garrison says the best part of the day was seeing in-person all of the memorials, especially the WWII Memorial. “It was just beautiful,” Garrison said, “I’d never taken a good long look at it. It was long overdue for those guys. I mean, they should have built that a long time ago.” Beard and Garrison joined the other Veterans, touring the memorials and monuments all day until it was time to head home. Halfway into the return flight, the Veterans were surprised with a “Mail Call,” about which Garrison says they joked as to how they got the mail up there at 30,000 feet.  Beard expressed how he starting reading the letters and continued reading all the way home; “They were so touching. There were letters from people I hardly knew, but wanted to write and say something. It’s hard to describe,” he said.  Even at the airport back in Springfield, the Veterans were greeted by “thousands of people,” said Beard.  Red, white and blue patriotism greeted them. The LLHF and the service all of the Veterans gave sincerely make me proud. About the Honor Flight, Garrison revealed, “It’s a wonderful thing. I wish they’d started this a time ago, especially for the WWII guys.” “It’s hard to describe it, but any Veteran…I would encourage him to go. They should go. They’ll never forget it,” expressed Beard of the trip.

NOTE: For more information on speaking to organizations, how to obtain an application, make a donation or just learn more about the Honor Flight mission, please visit the official website at LandofLincolnHonorFlight.org or contact Marketing Director John Dust at HonorFlightGuy@aol.com or cell 309.339.0227. The Honor Flight Network’s motto comes from the words and wisdom of that plain-speaking philosopher Will Rogers: “We can’t all be heroes…some of us have to stand on the curb and clap as they go by.”