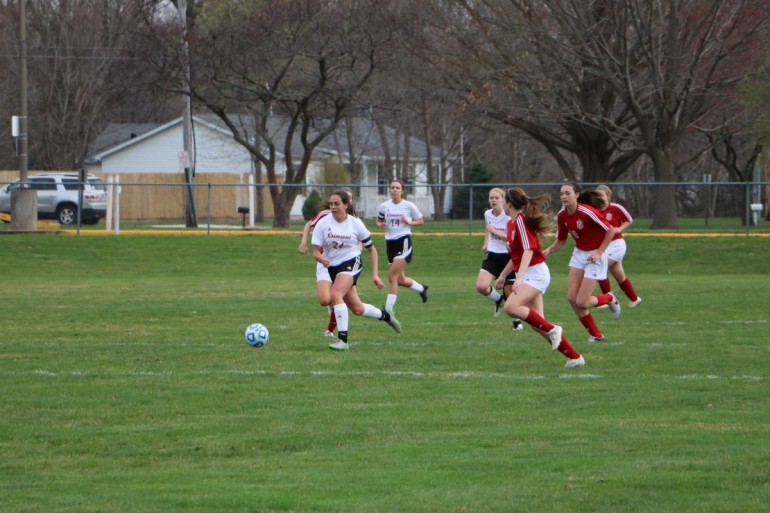 From the moment she first joined the Jacksonville High School’s girls’ soccer team back in the spring of 2013, Claire Cody has donned the crimson red regalia of a varsity player whose impact on the pitch would be felt immediately. Since that time, Cody has continued to leave her mark as one of the best footballers in JHS history, as she enters her senior year as the school’s sixth all-time leading scorer and tenth in career assists. Cody’s performance on the pitch over her three years at JHS – along with her accomplishments playing for the highly-touted St. Louis Scott Gallagher Metro club team – has landed her several scholarship offers from college programs throughout the Midwest. Recently, back in early February, Cody signed a letter of intent to play for the Mastodons of Indiana University-Purdue University Fort Wayne (IPFW), a Division I program of the NCAA.

Cody first drew the school’s attention when IPFW’s head coach Jason Burr witnessed her playing with her club team in Florida. Impressed by what he’d seen, the IPFW staff began reaching out to Cody via email, making it known that they were very interested in pursuing the Jacksonville forward/midfielder.

“Prior to that I hadn’t heard much about IPFW but after I researched the school and coach I thought it might be a great opportunity for me,” Cody said of the recruiting process. “A couple weeks after (Coach Burr) emailed me, my dad and I went on a recruiting trip there. I fell in love with the campus and met a few of the players. After we talked in (Coach Burr’s) office, I really liked his coaching philosophy and expectations he has of his team. (IPFW) made me an offer right there, which I wasn’t expecting. (Coach Burr) didn’t promise me that I would be a starter, but he expects that I’ll be an impact player right away.”

Aside from the high level of competition she’ll be squaring off against at IPFW, Cody spoke about the educational aspects of attending a well-respected university as well as the team comradery that she felt during her official visit – two factors which ultimately had a major impact on choosing IPFW over other schools vying for her commitment.

“IPFW really stood out to me because of how comfortable I was with the coaching staff and the academic opportunities. I will leave there with a degree from either Indiana University or Purdue University, depending on what I major in,” said Cody of the school’s academics. “Just this past January, I had my official visit with all of the new recruits as well. There are 12 of us freshmen coming in and I feel like the program is very up-and-coming. Before, I was already excited to play there next year, but after meeting all the recruits and the rest of the team, I can’t wait to get started. I know my decision was the right one.”

Before heading off to Fort Wayne however, Cody still has one more season to fulfill her legacy at JHS. And while the senior and two-time team captain has already accumulated a number of individual accolades – including being named All-Central State 8 and All-Sectional three years in a row – Cody will be the first to tell you that success in soccer comes only through a concerted effort from all 11 players.

“My individual goals are the same as my team goals,” Cody explained. “I’m hoping and expecting to have more success this year as a team. We only lost one senior (from last season) and after our team suffered many injuries last year, players had to step up and they gained valuable experience, so our underclass men will be key for us this year.”

With conference rival Chatham Glenwood having reached the state finals each of the last four years, Cody and the rest of the Lady Crimsons are fully aware of the stiff competition that lies ahead. Yet Jacksonville, led by Coach John Mansholt, who enters his 19th consecutive season as the team’s head coach, seem poised to welcome the challenge.

“Our area and especially the central state eight has always had very strong girls’ soccer,” said Cody. “We always have a tough regional but, I think this year especially we have a good chance of advancing past it. After starting for three years and also playing club soccer at a high level, I think I’ve always known what we’ve needed to do to be successful, but I feel this year it’s just a matter of executing that knowledge.”