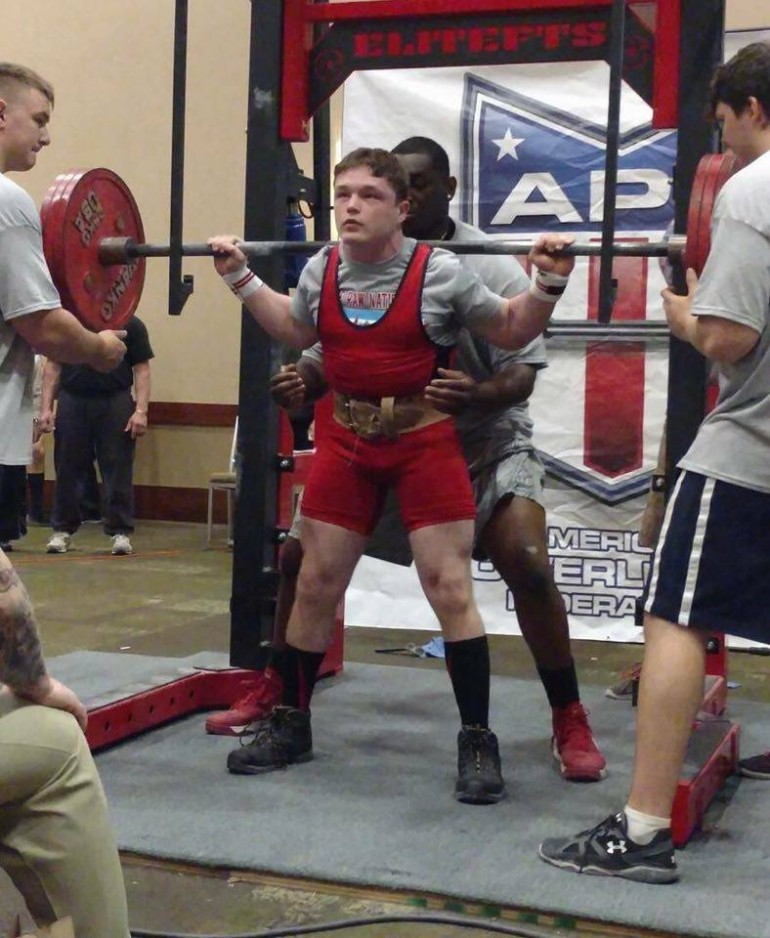 It can be cliché to refer to someone as a “hard worker.” Sure, everyone works hard at certain times with certain tasks, but there’s different levels of what I consider hard work, especially when it comes to athletics. Yet every so often you’ll come across a rare athlete, ones that at times might have to be reined in just a bit. These are the kids with relentless work ethics who give 150% effort in every practice and every workout – sometimes even doing extra – without even being asked to do.

Jacksonville High School’s Michael McNulty fits the mold of the athlete described in the previous sentence – one whose drive is so constant that, at times, might need to be told to pump the brakes. The 15-year old soon-to-be sophomore plays both football – where he was coached by yours truly – and wrestling for JHS, yet now, just three months after being first introduced to it, McNulty may have found the perfect sport for his size, stature and unrelenting work ethic. That sport? Competitive powerlifting, a sport which McNulty’s father Ron – a former powerlifter himself – introduced to his son just over three months ago.

When asked what inspired him to give powerlifting a try, McNulty said that he got into it because “my dad used to compete when he was younger.” Adding to that was McNulty’s father, who said, “Knowing what kind of kid he is, I said ‘Do you want to go to this meet and try it?’ and he said ‘yeah’ and at that point he’d only been working out in gym class.”

McNulty’s first meet was a competition in Peoria, Ill., sanctioned by World United Amateur Powerlifting. And despite his lack of powerlifting experience, McNulty did more than simply hold his own.

“The very first meet he went to, for the WUAP in Peoria, the world squat record for 13 to 15 year olds was 352 pounds … and (Michael) ended up getting 397 pounds. But since it wasn’t an internationally sanctioned event it only counted as the American record,” McNulty’s father explained.

In the sport of powerlifting there are several different associations within each state as well as nationally and internationally sanctioned competitions. Aside from the various federations, there are also different divisions based on age, weight and amount (if any) equipment the lifters are allowed to wear. For McNulty, he prefers to compete in “Raw” events, meaning that the athletes are not permitted to wear any sort of lifting equipment such as gloves, knee pads or arm sleeves. Typically at each event, the athletes complete three different lifts: the bench press, the squat and the deadlift. Each competitor gets three attempts for each of the three lifts, using their highest number of each completed attempt and adding them together for a cumulative score at the end.

On May 6-8, McNulty and his father traveled to Lombard, Ill., for the American Powerlifting Federation (APF) Raw Nationals. Once there, McNulty set new bests for himself in both deadlift (446lbs) and squat (413bs), which, had they occurred in international competition, would’ve counted as new world records for 13-15 year olds. Although he is so new to the sport and a rather quiet, humble kid by nature, McNulty wasn’t exactly surprised that he was able to put up such big numbers considering the work he puts in on a weekly basis.

“My numbers are kind of just starting to develop, for instance a couple weeks before the (APF competition) I squatted 420 (pounds) raw, then went up there and did 440 (pounds), so I mean they’re going up pretty fast,” McNulty said of his progress. 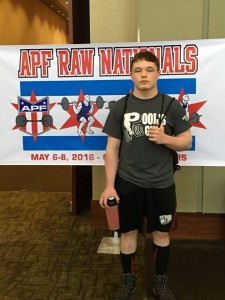 While he’s not competing, McNulty spends several days a week working out at various places from Fitness World and Anytime Fitness in Jacksonville, to Pool’s Gym in Quincy, Ill. Moving forward, McNulty will begin competing in the 16-17 year old division as he turns 16 in late June, yet with his numbers continuing to grow along with his body, he admits that powerlifting is something that he’ll continue to do – especially now that a handful of colleges have their own powerlifting teams and programs. Depending on his performances over the next several events, and whether he gets an invite to the world powerlifting competitions, McNulty says that, if things go well enough, he will like focus more primarily on powerlifting as his main sport.

Having personally known Michael McNulty for a little over a year – almost exclusively on the football field or in the weight room – one can see vast potential for the teenager when it comes to the sport of powerlifting. As McNulty mentioned, developing better technique and adjusting to the specifications of each competition will be what he’ll look to improve upon as he continues his career. And considering the accomplishments that he’s already added to his resume after only three months’ worth of experience, McNulty’s future in the sport of powerlifting looks as though it could be a very promising one indeed.