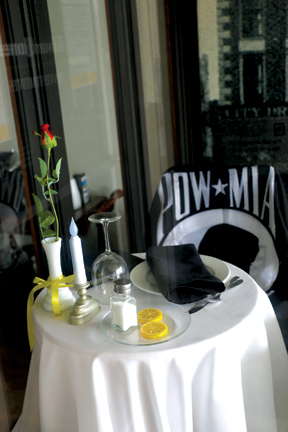 The window cases along the entryway to the office of Edward Jones Financial Advisor Brent Borderkircher might have a little something in them to match the season or local goings-on, but not an ornate window display.

A few years back, Bordenkircher did something different. “We put that [Missing Man Table] display up around three years ago. I talked with a few community leaders whom I consider influential veterans, including Tim Ritzo, about the appropriateness of doing this, because from my understanding this display was usually reserved for places where people would eat. The response was overwhelmingly positive to proceed with the display. As a financial services firm, we don’t have much to ‘display’ in our display windows, so with our high foot-traffic in the downtown area, I couldn’t think of anything more appropriate. Not having served myself, I researched the Missing Man Table, and tried to recreate it in every detail. Brad Fellhauer from Bogart’s donated the linens, settings, table and chair. Originally, All Occasions would supply us with live roses, and Schiraz with the cut lemons, but we have since went to artificial due to temperatures in the winter, and fruit flies in the summer.”

Bordenkircher continues, “My profession, as you might expect, deals significantly with retirees. Twenty years ago, when I would introduce myself to people in the community in building my business, the one thing that always stuck out to me was the sheer number of people I met who served willingly as young men, and yes, even then, women, in WWII and Korea. These days it’s veterans from Vietnam, and Desert Storm and other conflicts. Sadly, I have very few WWII veterans left to serve as an advisor to, but many of them have shared their stories with me – and those stories I will always have. It was truly an unanticipated blessing of my job. We have a Wall of Honor inside our office to honor those who we were fortunate enough to meet and do business with, and this table seemed the appropriate way to honor the fallen, missing, and imprisoned who made the same and even greater sacrifice and whose stories we may never hear.”

The display Bordenkircher put up nearly three years ago has been brought back. Currently, the west case holds what looks at first glance to be a small dining table set for one. However, it is much more than that.

The War Memorial Center describes it as, “The Missing Man Table, also known as the Fallen Comrade Table, is steeped in symbolism and is featured in solemn ceremonies representing fallen, missing or imprisoned U.S. military service members. Each item on the Missing Man Table represents the emotions and feelings reserved for those who did not come home. The ceremony symbolizes that they are with us, here in spirit. All Americans should never forget the brave men and women who answered our nation’s call to serve and fought for our freedom with honor.”

The West Central IL Leathernecks Marine Corps League #1177 is responsible for setting up the tables this time around. Three tables are set up in Jacksonville. For those not wishing to enter an establishment or building, the first is in the front window of the Edward Jones office at 25 S. Central Park Plz. Above the table is a POW/MIA flag, representative of the sacrifice and devotion to our country and as a reminder for no prisoner of war (POW) to be forgotten. The two additional tables are set up in the City of Jacksonville Municipal Building lobby at 200 W. Douglas Ave., and in the Jacksonville Public Library at 201 W. College Ave.

The league’s commandant, Tim Ritzo, summarizes that their chaplain, Bob McLin, “had received some information from a friend about this and he picked up on it … it’s been all over the country … military units, marine units and … it had been done several years ago in Jacksonville. Bob thought it would be a great idea to bring it back here locally and the Marine Corps League agreed.”

The West Central IL Leathernecks Marine Corps League #1177 has about 35 to 50 members, with 15 to 20 active, per Ritzo. Of interesting note, he adds, “The 1177 stands for the number of people killed at Pearl Harbor in 1941. That’s the significance.

Ritzo says that a number of people have been involved in getting everything needed for the displays. When someone looks at the table and reads the information, Ritzo hopes, “ they have a better understanding of the POW/MIA situation … well, situation might not be the right word. No, I hope they have a better understanding of what’s involved … what we’re working toward … trying to honor all the people who did not come home … an emphasis on the people who are missing. There are still many serviceman going back a long way that are still unaccounted for.”

Additionally, Ritzo mentions that the “Official Veterans Day Ceremony” presented by the league, which was to take place on Wednesday, November 11, has been canceled. The decision was made in accordance with COVID-19 State of Illinois restrictions.