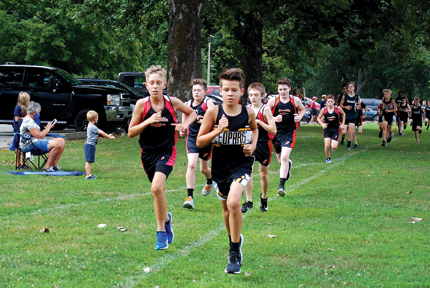 Another successful Franklin/Waverly Jr. High Cross-Country season has come to an end and the Flashes are Sectional champions.

On Saturday, October 17 the team finished their season at the sectional meet hosted by Carrollton’s St. John’s School at the Mary Michelle Winery. Normally sectionals have 12 to 14 teams but due to the pandemic, the Illinois Elementary School Association (IESA) split the sectionals into groups of six or seven teams each. The team consisted of 19 boys and six girls from both the Franklin and Waverly schools; the teams have a dual record of 16-6 for the season.

“We felt our girls had a good chance of winning the sectional going into the meet,” commented Pat Bonjean, co-coach of the Franklin Flashes. “The boys’ team however was up against a very good Jacksonville Our Savior School (OSS) team.” The top three runners at sectionals for the Franklin team all had their best race of the season and it was enough to tie OSS 38-38. Those runners were Collin Johnson, James Johnson and Marshall Bowman. Winning the sectional title was done with a tiebreaker that was based on the finish of the sixth-place runners. Their sixth-place finisher, Leo Bergschneider, finished higher than the OSS sixth-place finisher.

In addition to the team winning the title, individual medals were given out to the top 10 in each race. Sydne Dean, Aliviah Colwell, Zoey Ercegovich, Jenna Harris and Baylie Colwell all won medals for the girls’ race. Collin Johnson, James Johnson, Marshall Bowman and Owen Evans all received medals in the boys’ race.

Cross-country in Franklin began at the high school in 1973 and was established as a junior high sport in 1977. Bonjean became the coach in 2009 and his son, Christian joined him as a co-coach in 2014. The girls’ team qualified for state in coach Pat Bonjean’s first year.

“Christian has been the driving force behind the success of the team and since he has been sharing the coaching responsibilities with me the teams’ success has been on the rise,” remarked Bonjean. The boys have qualified for the state meet in six of the last seven seasons and the girls qualified in three of those seasons. Since the Bonjean coaching team began six years ago the boys’ team has placed first or second at sectionals each year, being champions in 2018 and this year. The girls’ team won their first sectional this year.

Over the years Franklin Jr. High has had 16 boys’ teams and eight girls’ teams qualify for the state meet and have had 12 All-Staters. “These are the things the current athletes are aware of and they take pride in carrying on the tradition of Flashes cross-country,” concluded Bonjean. “Of the 25 athletes on the team, 22 will return next season and we are hoping to be very competitive next season. The three eighth-graders leaving the team will be missed. They competed for a combined 11 years.”