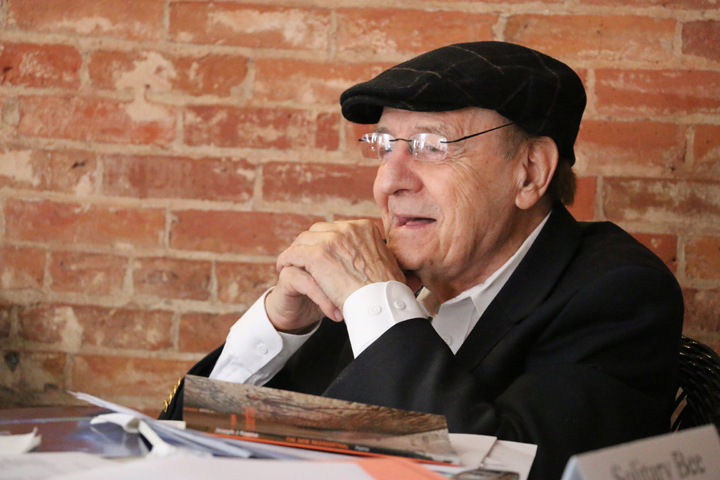 Conducting an interview – a good interview – is difficult. The same goes for the interviewee; interviews require each participant to be on their toes, ready to improvise notice. I’ve probably interviewed close to 100 people since I started writing for The Source back in August of 2014, most of whom I was unacquainted with prior to our visit, and the process can range from uncomfortable to rewarding. Some people have a lot to say – their answers are intriuging – and each response prompts further questioning. Others hardly speak at all. But of all the interviews I’ve been a part of, none have been more enthralling than my conversation with Dr. Joseph J. Kozma.

From the research I’d done leading up to the interview – admittedly not enough – I knew two things about my subject: that (a) Dr. Kozma was indeed a doctor, and (b) he was a globally-read poet. Irrationally or not, these two facts were intimidating, because (a) this man was clearly much wiser than I was, and (b) the essence of my impending article would be a writer (me), writing about another writer (Dr. Kozma), one whose experience and aptitude substantially outweighed my own. I felt oblgated to produce a well-writen piece because, at the very least, my audience would include the subject himself, Dr. Kozma, who’s opinion of my work (suddenly) mattered to me…a lot. This piece had to be done right. It had to do justice to it’s subject.

Although it felt like a mere fifteen minutes, our meeting lasted just shy of an hour, and we covered a lot of ground. We talked about his upbringing in Hungary during the 1920’s and 30’s. We talked about his time as a refugee during World War II, and about the poems that were lost during the process of immigrating to the West. Mostly, we talked about poetry, Dr. Kozma’s chosen vehicle of expression from a very young age; a literary device that’s less of a hobby and more of a necessity. 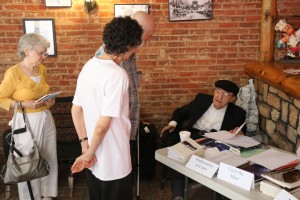 “The very first [poem] I wrote was when I was in first grade, and it was about a cat and a dog, and they got together and of course the cat was running away and the dog after it. That was about maybe four lines,” said Kozma, happily recalling his early work.

Since his initial writing, the subjects of Kozma’s poetry has moved beyond household pets and into more philosophically-driven notions such as life and death, the meaning of dreams, or even casual topics like Leo’s Pizza. Throughout the pages of his books, readers might find existentially-minded elegies or requiems for his late wife. In the pages of Ninetoro – a fictional character whom Kozma describes as “half crazy, half right” – they will encounter visions of an alternative reality, where “White walls broke into the landscape of foggy dreams grown into leaves on branches made of twisted air” (Mathematics in Color, p 38).

“You live with it, you have it.” said Kozma of his poetry. “My idea is that a poet should be able to write about anything. If it grabs him, if it inspires him, he should be writing about it – floods, earthquakes, even divorce – anything.”

His first anthology, Mathematic in Color (2009), takes its title from the one poem that survived throughout his relocation to the United States – described in the Introduction as a “book commemorating a time that was, meaning existed”, when “many poems saw the light, and hoped for a future”, one which “never happened.”

“Of course after I came to the US, I was tied up in internship, residency and (medical) practice, and so I kind of wrote, but couldn’t do very much until about 7 or 8 years ago when my wife died, and then I really started to write,” Kozma said of how he got started on his initial publication. “That’s when the first [anthology] came out.”

Along with Mathematics in Color, Kozma’s other works include: Until We Meet (2011), where Kozma explains that most poems begin as internal thoughts and evolve into external expressions. His latest anothology, The New Neanderthal (2014), explores the concepts of eternity, time and space. It also features poems whose subjects include Carl Sandburg, Atilla the hun, and Mona Lisa. And while each poem is its own, Kozma hopes readers will view the boundaries and divisions of his books as flexible and contrived, acknowledging their independence while recognizing their slight connection.

“I write poetry because I have to,” Kozma said. “What I would like to do other than just writing poetry would be to promote poetry so that it would be accepted as a communication tool, and so that it can be read at occasions. When the President is innaugurated, there is always a poet there, well, why can’t we just do it for smaller events, not just the very big ones.”

Poetry’s most enduring quality lies in it’s subjective nature; it’s a process involving interpretation and reinterpretation based on individual consumption. Like music, poetry (as well as all forms of writing) has the ability to transcend generations. And to paraphrase American essayist Chuck Klosterman, often times the most transcendant moments are inevitably unintentional, because poetry (or music) allows readers (or listeners) to reinvent the message and apply new, personal meanings that the author (or songwriter) could never purposefully create.

Looking back on our meeting, I initially wished that Dr. Kozma and I had more time. There was so much to learn from a multilingual 94 year-old doctor-poet. But several weeks later, after I’d thrown out half-a-dozen drafts of this article that you’re currently reading, I came to a realization: our conversation didn’t have to end. If I wanted to know more about Dr. Kozma and his ideas about the world, I could simply look to his books and there he’d be. That’s the thing about writing: it holds authority over time and place, connecting 94 year-old Hungarian poets to 24 year-old newspaper reporters