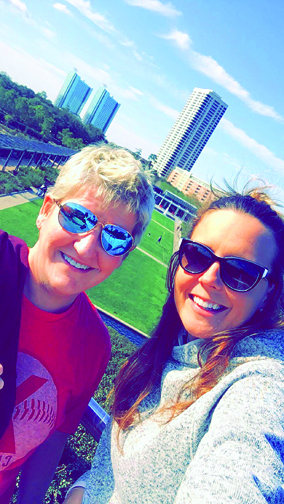 Life is a precious gift and each waking minute we should be grateful to spend it with the ones we love, enjoying the time we have together and living life to the fullest. Even though someone can only be in your life for a short time, the impact can be life-changing.

Jan Thompson was born and raised in Rushville to Albert and Mary Thompson. She had three older siblings: Candy, Scott and Mark. Thompson was diagnosed at an early age with Cystic Fibrosis (CF) and her parents, having lost a son to CF, wanted Thompson to be independent and live life for as long as possible. The treatments, medicines and advice from the doctors helped her parents give Thompson as normal a life as possible. She played multiple sports throughout her childhood into junior high and high school which set the tone for her entire life.

“Jan and I had been mutual friends for quite a long time but began dating in 2015,” recalled Danielle Doerfler, friend and partner. “Jan wasn’t afraid of much; you could see that in every crazy adventure she did. She appreciated waking up every morning, something we often don’t think about. I think she viewed her life as though we all should, with an unknown expiration date.”

On April 19, 2013, Thompson received a wonderful gift of life, in the form of a double lung transplant. She was forever grateful to her donor for giving her the ability to breathe again. After receiving the transplant, she underwent rehab and recovery and soon was able to start doing the things she loved to do. The transplant allowed her to breathe again, eliminating the daily cough she had from CF, the breathing treatments and the expelling of mucus. The CF was still present throughout her body and mainly in her digestive tract. Over the years she dealt with setbacks from her liver and biliary tree. One day at a time, one moment at a time and one breath at a time.

Doerfler was able to love Thompson after the transplant and see all the amazing ways she celebrated her lungs. She went skydiving twice and jumped off the Stratosphere in Las Vegas once. She went ziplining, parasailing, paragliding, navigated a hot air balloon, and kayaked the ocean. She loved the freedom of the air and the solace of the water. Through these adventures, the two created memories that Doerfler will never forget.

“A passion Jan brought into my life was raising awareness and funds for the Cystic Fibrosis Foundation. She loved attending the CF events in sharing her story that 50 years of life was possible,” added Doerfler. Thompson established Team Got O2?!, an original name she created and they used that team to fundraise and participate in Great Strides, Xtreme Hike and Cycle for Life for the Gateway Chapter in St. Louis. They also attended FestivAle and the CF Wine Opener over the last few years.

After the transplant, Thompson had to take additional medications to prevent rejection. One potential side effect of the transplant medications was skin cancer. This developed in her during 2016 – 2017 and it tried to slow her down but through her positive attitude, she would not let it.

Thompson and Doerfler had taken a trip and after the flight, Jan had developed a nagging cough. Upon returning home to Missouri, they immediately contacted the transplant team. She was hospitalized and diagnosed with RSV (Respiratory Syncytial Virus). Her caregivers in the hospital worked tirelessly to treat this before it caused any long-term damage. However, it was too late because her body had begun to reject the transplanted lungs. She was given a diagnosis of rejection on February 14, 2019. Thompson underwent an intense round of anti-rejection protocol but unfortunately, it did not work.

She faced the rejection head-on and like other times in her life, she knew she had to fight. In the late summer of 2019, her lung function had dropped dramatically, and the transplant team recommended a second double lung transplant. That was considered a very risky surgery, but she knew she would have to try. In August Thompson underwent testing to be listed with UNOS (United Network of Organ Sharing) for a second transplant. Excited, blessed and optimistic about getting “the call,” they thought about tackling this next part of life together.

Unfortunately, before they could experience a second gift of life, Thompson’s body began to fail. The 50 years of CF had taken a toll on her digestive tract, and along with her lungs, her liver was now failing.

In January 2020, they returned home with a terminal diagnosis. Over the course of the next four months, Thompson and Doerfler enjoyed life, spending time with family and friends and slowed down to appreciate each breath that Thompson took.

Thompson passed away peacefully on April 11, 2020, at home with her pups and Doerfler by her side; just like she wanted.

During the last four months of Thompson’s life, she and Doerfler had many conversations about her hope for the future. Doerfler promised to carry on her legacy by sharing her story, continuing to participate in Cystic Fibrosis events with Team Got O2?!, as well as establishing a foundation in her name which she will begin creating in 2021. Above all, Thompson wished for Doerfler to stay in touch with her family, travel and appreciate the breath of life.

“Shortly after she passed, I coined the phrase #bethejan. It is a mindset, lifestyle and outlook of everything Jan did. Be kind to people, leave your mail carrier a Gatorade, adopt a pet, donate to non-for-profit, be an organ donor, jump out of planes, kayak the ocean, travel, love someone, buy someone a meal and always say please and thank you. Jan did all of these things. If we all did that the world would be a softer place and we would appreciate those breaths,” concluded Doerfler.

Doerfler currently lives in St. Louis and works for Fontbonne University Athletics. She is formally from Jacksonville and worked at MacMurray College as the head volleyball coach

Learn more about Cystic Fibrosis and organ transplants at cff.org and donatelife.net