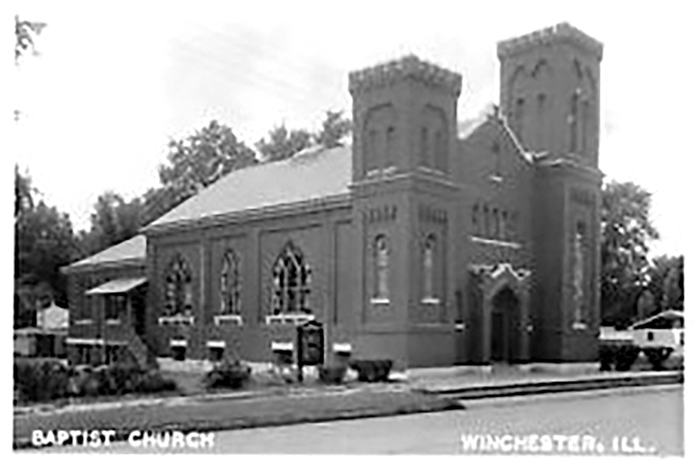 The date was June 25, 1825, just five years before Winchester was platted on a map and seven years after Illinois became a state. Fourteen people in their twenties gathered at David Casbier’s cabin on the hillside south of what would become Winchester. Originally named Sandy Creek Baptist Church, it was the first known church in Winchester.

During those early years, they met in homes and a schoolhouse until they erected the first building on the Casbier farm. The location of that farm is where the current water towers stand at the end of South Main in Winchester.

Around 1833-1834, the church split and became two different congregations. One part of the membership was in favor of missionary work and the other part opposed the idea. From this split, one group changed its name to First Baptist Church of Winchester (FBC) while the other group became Friendship Primitive Baptist Church.

In 1838, the members of the First Baptist Church purchased a lot for $100 and a frame building was constructed. That location is where the City Hall of Winchester is currently located. They remained in this building until 1853 when they purchased land on the corner of what would become West Cross and Mechanic streets, their current location. They kept the bell from this wooden structure. The current brick structure was built in about 1854. The towers were added in 1865. By 1895, the church was paid for and they celebrated with a revival.

The stained glass windows throughout the sanctuary were added in 1908. In the 1940s, members of the church redecorated the interior and preserved the exterior. The total cost of the project was $20,000, which was completed by 1949 and paid off by December 1950. In the late 1960s, the main floor of the church and the sanctuary was remodeled. The cost was approximately $50,000.

As First Baptist Church grew, they built an extension on to the south end of the church. Completed in 1999, the fellowship hall added an additional 6,000 square feet. The facility has a large fellowship area, five classrooms, nursery, full kitchen, church office, pastor’s study, foyer, bathrooms and a storage closet.

An elevator was also installed, enabling people to access the sanctuary level of the church. This addition not only has been beneficial to the members of First Baptist, but also it has been a great addition to the community of Winchester, providing a location for large meetings, dinners, and receptions.

Winchester’s First Baptist is an active member of the Ministerial Association of Winchester and is one of eight active churches that serve the community. FBC is associated with American Baptist Churches USA and the Great Rivers Region Association of Springfield. Currently serving as their 51st minister is Rev. Bill Baughman, a Winchester native who attended First Baptist in his youth and graduated from Winchester High School in 1978. He joined this congregation as their pastor in September of 2019. An interesting side note: his wife CheriLynn has had her membership there since childhood, making her the only pastor’s wife to not have to transfer her membership.

Once the COVID-19 restrictions on public gatherings has lifted, the church will be planning a way to commemorate their 195th anniversary. They are located at 200 W. Cross St. in Winchester. They have Sunday School at 9 a.m. and Worship Services at 10 a.m. Currently, they use Facebook Live to broadcast daily Bible Study Monday through Saturday and also their Sunday worship.