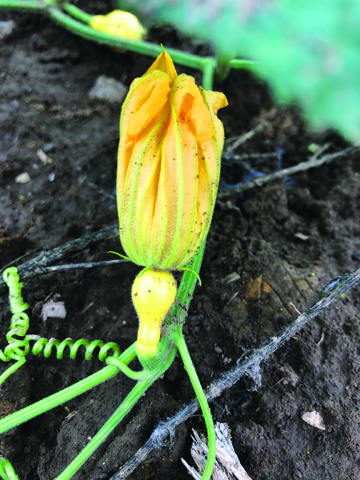 Ag in the Classroom has taken on a new look during this challenging time. I do have a couple of classrooms that I am allowed to visit in person, but I am remote everywhere else. We turned lemons into lemonade and went “live” from the pumpkin patch at our farm. It was great to share the patch with the students, but I would much rather see them in person!

I would like to share some of the pumpkin lesson that was given to the students. Even if you think you know all about pumpkins, I bet I can give you a few fun takeaways. We have been growing pumpkins for many years and every year I manage to learn something new. Let’s start by being reminded that Illinois leads pumpkin production for the entire world and Illinois farmers grow 90-95 percent of the pumpkins that are used for processing. Over 85 percent of the world’s canned pumpkin is processed at the Libby’s Plant in Morton, Illinois – The Pumpkin Capital of the World.

The pumpkin is a member of the gourd family. Like most plants, it begins as a seed. The seed then grows into a vine that produces flowers. Did you know that you need a male and a female flower to produce a pumpkin? The male flower is where the pollinator (bee, butterfly, beetle, etc.) picks up the pollen on its wings and feet and then transfers it to a female flower where the pumpkin grows. The female flower actually has an ovary under the bloom that develops into the pumpkin once it has been fertilized. The new bit of information I learned this year is that the major pollinator of pumpkins is the squash bee. This bee differs from the honeybee as it lives alone in an underground nest. As you walk through the patch you can see their little holes in the ground everywhere.

Native Americans first used pumpkins before the discovery of corn. They ate them baked, boiled, dried; used the blossoms in soups and ate the seeds. They dried the shells and used them to store things and used the fibers to weave mats. The “jack-o’-lantern” actually came about because Irish immigrants used to carve turnips and put them in their windows to scare away ghosts. Once they arrived in America they discovered the pumpkin was a much better option as it was larger and easier to hollow out.