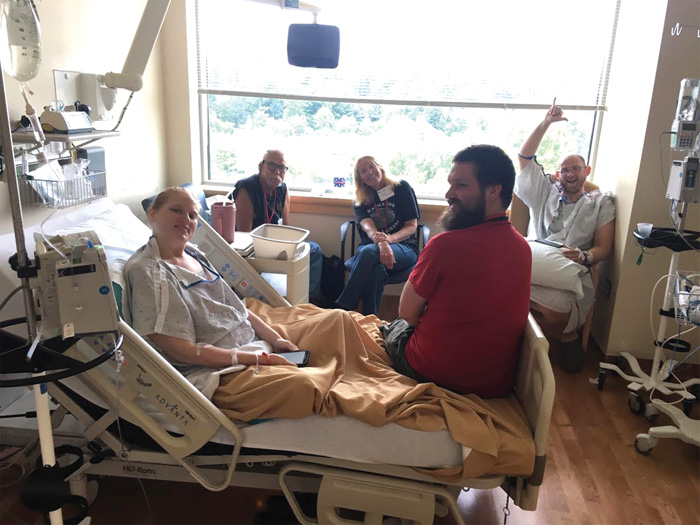 One family. Two brothers and their four children. Each of these six members drawn closer together as they each fight the ugly c-word. Cancer. Specifically stomach cancer.

Frank Anderson, of Virginia, was the first of the family to receive the diagnosis. In early 2017, he had had a routine colonoscopy, which showed multiple polyps. This led to a GI genetic panel looking for a polyposis gene and the results showed a CDHI gene mutation. Knowing the outcome, the family started being tested, as well. Both his children, Laura and Eric, were first diagnosed. Then Frank’s brother, John Anderson, plus two of John’s three children, Richie Anderson and Lacy Anderson, received their diagnoses. Frank’s third brother, Bob Anderson, of Jacksonville, is currently awaiting the results of his testing. During the many months of treatments and various surgeries for the family, Frank’s cancer unfortunately metastasized to his esophagus and over the course of time became terminal. Frank passed away May 6, 2018.

Once diagnosed, and to prevent the spread of cancer within the body, the best treatment in addition to the typical radiation and chemotherapy is removing the stomach. Most of the family members diagnosed have had this procedure in either The University of Chicago Hospital or through a special program in Maryland. After one of the family members was scheduled for stomach removal in Chicago, the family found out about this free program through a hospital in Maryland. The hospital even took care of travel expenses for the patient. Now, three family members have had their stomachs removed in Maryland through the course of several months. This special program is through Maryland’s National Institute for Health (NIH), and has a complete team dedicated to studying this particular gene. “NIH has a study that they are enrolled in. It’s an extraordinary place and we cannot say enough good things about it,” remarked Heather Anderson, wife of Richie.

During the treatments, surgeries and hospital stays that each family member has undergone, it was discovered that Lacy Anderson, of Petersburg, had an inoperable situation for the time being. She has since been given the diagnosis of stage four cancer and undergoes 5FU chemo treatments that are each infused over the span of 48 hours; she receives the treatment every two weeks, which requires her to be hospitalized about three days each time. The family is hoping for remission so that this surgery can take place and give her a fighting chance at life.

The family has scheduled a benefit with a live band, pulled pork dinner and an auction to raise funds for Lacy’s accruing medical bills, as she is unable to work at this time. This benefit will be held September 29 from 4 to 8 p.m. at Connor’s Pub in Tallula, Illinois. The event will feature the band “Ryman’s Way,” a raffle for half of a hog, plus a 50/50 raffle. There is a suggested $10 donation at the door.

“We are a strong family,” stated Richie’s wife, Heather. “Our family functions consist of conversations about who can eat what and what they can’t eat now. Who has appointments next? This is the Anderson life.” Richie and Heather Anderson live in Athens. “They may all tell you … the first question everyone asks, ‘How do you live without a stomach?’” Heather Anderson continued, “As you can imagine they all have lost a tremendous amount of weight. The lifestyle changes are tremendous, but they are all amazing and are figuring it out in their own ways.”

Stomach cancer is difficult to detect and often caught too late. A diet high in smoked, salted and pickled foods; obesity; and use of tobacco products each increases the risk of this cancer. There are many potential symptoms of which to be aware. As the disease increases, the symptoms also become more prevalent. It is important to note that these symptoms can be associated with other gastrointestinal conditions or diseases. If you are experiencing any of these noted in the following list, you need to be proactive and see your doctor.

Some of the signs and symptoms of stomach cancer can include:

• Abdominal pain or vague discomfort in the abdomen, usually above the navel

• Nausea and vomiting and/or bloating after meals

• Vomiting blood or blood in the stool

• Symptoms may mimic other conditions, such as GERD, gastritis or peptic ulcer

To support this benefit for Lacy, you may contact her sister-in-law, Heather Anderson, at (217) 971-6977 or htis2988@gmail.com. More information on stomach cancer can be obtained through the website: nostomachforcancer.org.