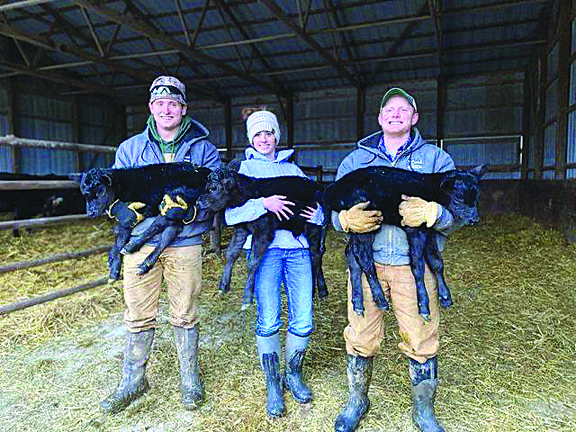 Triplets Ryan, Madeline and Joseph Ward may be one in 10,000 but living and working on a cattle farm means they have one in 100,000 luck. The Wards welcomed triplet calves into their herd several weeks ago, a one in a 100,000 chance.

It is the first time this family-farm has had triplet calves. Madeline Ward says “The fact that she carried all three to term and was able to have them without assistance is amazing to us. A lot of times when a cow has twins she can have trouble delivering on her own, so three really complicates things.”

These 23-year-old triplets are no stranger to hard work and long days. They have been working on their family farm since they were young. Ward writes “… It does seem like there is always something to be done on a farm no matter the day,” a sentiment shared by many farmers. The boys, Ryan and Joseph, who went to work on the farm full-time after graduating high school, still work at the farm full-time today, while Madeline went on to pursue higher-education at Western Illinois university after graduation, before returning home to work at a Pioneer’s Seed Agency in Rushville and help out on the farm on her days off. Along with cattle, the Wards also farm corn, soybeans and wheat.

Growing up on a farm means the Ward triplets have lots of fun stories. Madeline Ward tells us one of her favorite memories includes a bottle-fed calf. “When we were six or seven years old, we had [a calf] that we named Henry who was more like a big dog than he was a calf. We used to ‘play rodeo’ by jumping on his back to see how long we could ride him before falling off. One day while we were at school, he had gotten out of the barn to go lay in the sun on our front porch and waited for us to get home.” She says that life hasn’t changed much since the triplets came, now they just have a couple of new babies to bottle-feed every day.