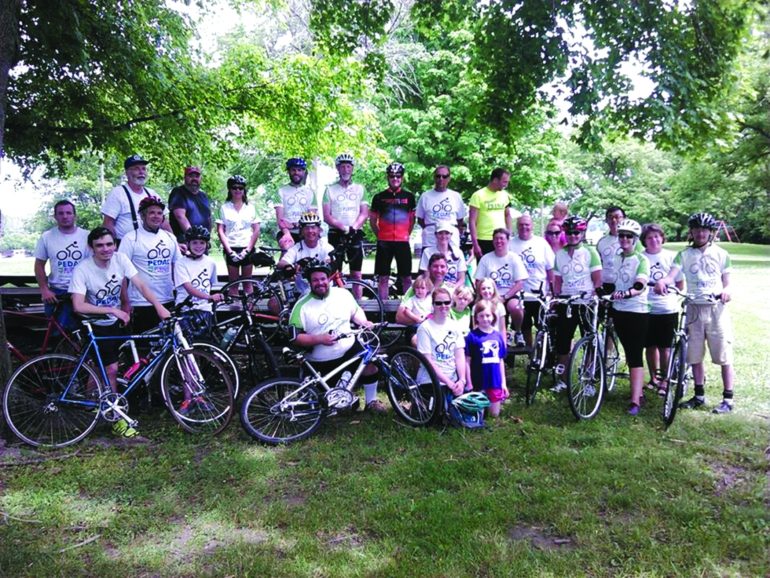 Last month, a total of 35 cyclists from Central and Southern Illinois biked over 300 miles from Metropolis to Springfield. The cyclists were participating in the second annual Pedal for a Purpose. The Rev. Scott Egbers, pastor of First Lutheran Church of Beardstown, and the Rev. Adam Dichsen, pastor of Faith Lutheran Church of Jacksonville, served as the leaders for this year’s event.

As friends and cyclists, Egbers and Dichsen began Pedal for a Purpose last year.

“Scott and I are good friends and colleagues, and we both enjoy biking and bike a lot together. Last year we decided it would be fun to make our own charity ride and raise money for Lutheran Social Services of Illinois. Sitting in a pizza restaurant we began jotting down ideas, and we ended up with 12 riders last year,” stated Dichsen.

Last year’s Pedal for a Purpose was a great success, raising over 14,000 dollars for Lutheran Social Services of Illinois. Egbers and Dichsen eagerly agreed to again sponsor this year’s ride. Armed with the knowledge that Lutheran Campus Ministries was in need of financial funds, the pastors decided that the money raised from this year’s event would go towards that ministry. While the group has not yet reached their goal of raising 30,000 dollars, according to Dichsen the event was still a success. “We haven’t reached our goal yet, but we’ve realized the financial goal is not the overall objective of what we are doing. It was to raise awareness of campus ministry, and to let people know they can play a part in campus ministry. It was also our goal to strengthen the overall sense of community among Christians as we biked together, ate together, and shared in conversation, and that was certainly achieved,” Dichsen said.

One of Dichsen’s favorite parts of the experience was the ride itself.

“The biking aspect went really well. We had about a dozen folks do the entire ride, which was four days and 300 miles long, and along the way we had people join in,” Dichsen explained. “We had several college students biking with us. It was really neat to get to know them better, and learn about their interests and studies. It was also nice to get a better understanding of the specific impact campus ministry has in their lives at their home away from home.”

While the cyclists were away from their own homes, they stopped at a total of 12 different churches along the way. Each congregation extended awesome hospitability to the group, greeting the cyclists with food and a warm reception. Each night, the group was hosted by a different church. They also engaged in evening worship services and presentations given by students or pastors involved directly with Lutheran Campus Ministries.

That really became a rallying value, recognizing that as cyclists, it is important to stay together and be a community as we’re going. It’s the same with campus ministry, it’s important that we come together and find ways to help support the ministry,” shared Dichsen.

And with that African Proverb in mind, the group did stay together and successfully completed their ride. On June 5th the cyclists arrived at the Crown Plaza in Springfield, where the Evangelical Lutheran Church in America’s Central/Southern Illinois Synod was holding its’ annual assembly.

“At the Crown Plaza there was a great reception of people meeting us and applauding,” described Dichsen. “The Bishop then introduced us, and we rode our bikes through the convention room and around all the tables. It was quite a treat to have us all riding in there together.”

Plans are currently underway for next year’s Pedal for a Purpose. Dichsen hopes for even more cyclists partake in next year’s ride.