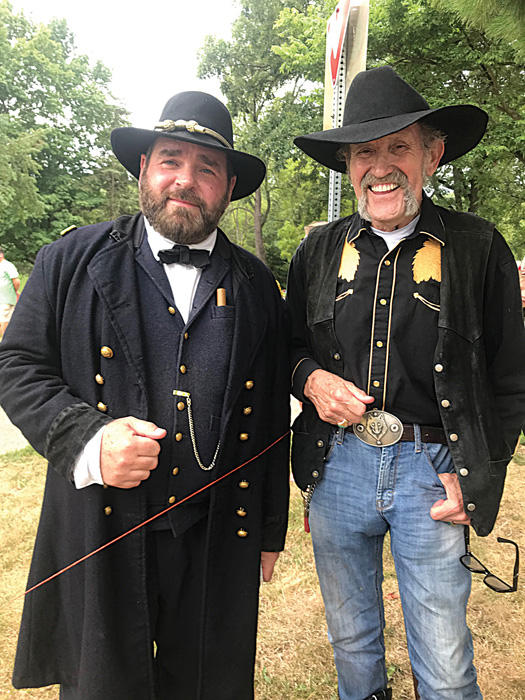 By the time I got to Jacksonville, the Grierson Days had already demised. At Jon Austin’s suggestion, I recently attended my first civil war re-enactment ever at the annual event in Galesburg. I was like a kid at Christmastime, enjoying every bit of it … From the encampments of the reenactors cooking their food with real campfires, to the exciting reenactment battles they staged. The ladies in their period-correct hoop skirt attire were a stunning visual of how folks looked back in the mid 19th-century. It was a huge plus to have Jon Austin along with me on this trip, as it seemed he knew nearly ALL of these people, including their regiment numbers, etc. He introduced me to dozens of different people who were wonderfully dedicated and passionate about preserving this tradition. I even met a fine Civil War band that had antique hoper’s from the 19th century and unique designs and sounds. There is even a group that demonstrates Civil War era dancing. I hope to bring this group to Jacksonville to perform for the public here. The head of the group indicated that during their performances they even invite audience participation so others can experience what it was like to go out dancing WAY back in the day. They had a separate section of the event area dedicated to another period in American history, during the late 1700s and very early 1800s specifically recreating the folks such as the fur trappers and traders who lived and traded along the river. They even had a fur trapper dressed in fur outfit and moccasins with a real wild WOLF on a leash! (T. Bone would have been jealous for sure. LOL) A standout attraction in this period re-enactment was the incredibly talented young folks who made up the historic Marching Fife and Drum Corp, complete with beaver fur adorned uniform hats, etc. with a full regimen of military choreography while playing. They were of middle school and young high school age. I would love to bring them to Jacksonville to perform at a special history program we may put on in the future. Their look and disciplined execution have to be seen in person to fully appreciate. Jon and I arrived early in the day and stayed from morning till evening. This experience inspires me to suggest that we figure some way of bringing back “Grierson Days” to Jacksonville. My suggestion is to rename it “Ron Gray Grierson Days” since the late Ron Gray successfully kept this tradition going for many years. I feel his immense contribution to the event should be remembered by all going forward. Just my idea, but I invite comments and suggestions from our readers.

Now on to: “Profiles in Excellence.” I would like to single out Dr. Charles (Chuck) Sheaf, whom I know has gone to Africa recently. I thought he was going on a safari or vacation, rather, he went to Ghana and gave his services as a physician and surgeon for free to many local citizens who do not have access to quality health care. Dr. Sheaf, a surgeon did some amazing surgeries he showed me pictures of, which must have made a lot of very poor people there very grateful and happy. “In His Service” is a local organization he was representing, which I found out about from Registered Nurse Theresa Schroeder. She herself has made many of these kinds of trips to faraway places, including Haiti, volunteering her services, where folks are so poor most of them never see a hospital. You have to tip your hat to folks like Dr. Sheaf and Theresa Schroeder, and the other volunteers for “In His Service” who could be going on a vacation like the rest of us but instead give their time and medical talents for the less fortunate. (Side note: I owe a personal debt of gratitude to Dr. Sheaf and his wife Lynn who together have also volunteered recently to help my restoration crew at 876 W. State St., helping us recently by doing finish work of sanding and painting of our historic old shutters that will go back on the large August Ayers House at 876 W. State St. (Thanks, folks, I was touched by your gesture.) Three cheers for Dr. Chuck Sheaff; his wife, Lynn; and Theresa Schroeder … it is caring and giving people like this that endear me to this community’s spirit.

And now our POW moment for this issue: Back in the early 1980s when interest rates soared to 18 percent, I went broke to the tune of more than $2,000,000. At the time I was trying to stop drinking as well. When I told my AA sponsor that I was so depressed I was thinking of suicide, he looked at me and said this ‘pearl of wisdom’: “Think of it this way: You can’t get hurt too bad, falling out of the basement!” That was black humor on one level, but it put my situation in perspective, and inspired me to start all over again one foot in front of the other. So, anyone who is going through tough times, that is a good one to get your arms around … (GRIN)

I am always looking for good examples to include in my two regular segments in the column: “Profiles in Excellence” and “Age is Just a Number”. So, I invite the readers to tell me of someone or some group of folks who should be singled out in these categories … these kinds of people teach and inspire us all by the example of their life.

Thanks to all for reading my second column offering in The Source Newspaper your PRIME source for local news and views. It is my goal to focus this column open on the life and people here in this town of Jacksonville, that I have grown to love more than any other place I have ever lived. So long and good health to all, ‘til we meet again in the next column.