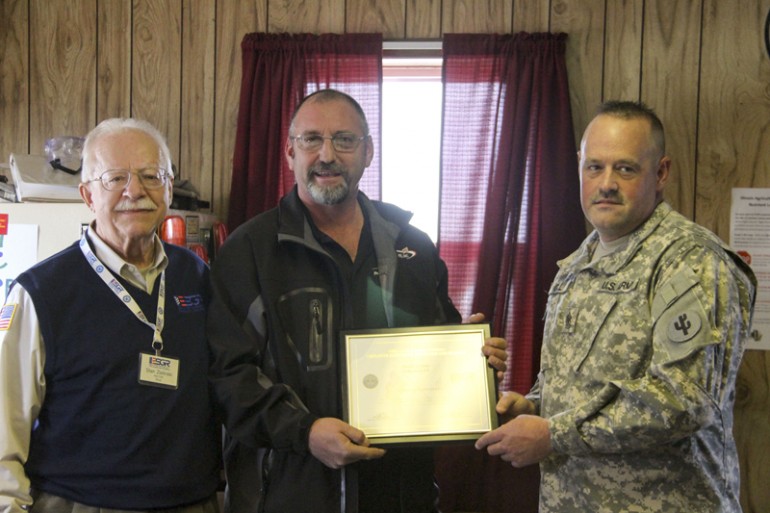 On Friday, November 20, 2015, Illinois ESGR presented a Patriotic Employer Award to Judd Lyons, Location Manager for Prairieland FS, Inc. in Franklin, IL. Prairieland FS, Inc. is a full service agricultural and energy supplier dedicated to providing high-quality products and services for the purpose of improving customer profitability. Mr. Lyons was nominated for the award by employee Ronald Gill, who is a Sergeant Major (SGM) in the U.S. Army Reserve and currently serving with the 206th Regional Support Group – Springfield, IL. In his nomination SGM Gill said, “Prairieland FS has had many military veterans as employees and continues to show its support by actively hiring them on a regular basis. The company believes that veterans are well trained, loyal, follow directions and have an ability to think on their feet. Because of a service member’s safety training and experience their knowledge results in a lower number of accidents and reduced damage to equipment. Franklin Prairieland FS is recognized as a firm that welcomes service members”. According to SGM Ron Gill this is only the second Patriot Award to be awarded from the 206th Regional Support Group during his tenure there. Judd Lyons also signed an ESGR Statement of Support for the Guard and Reserve. Pictured here (L to R) are IL ESGR Central-West Chair Stan Zielinski, Judd Lyons, and SGM Ron Gill.