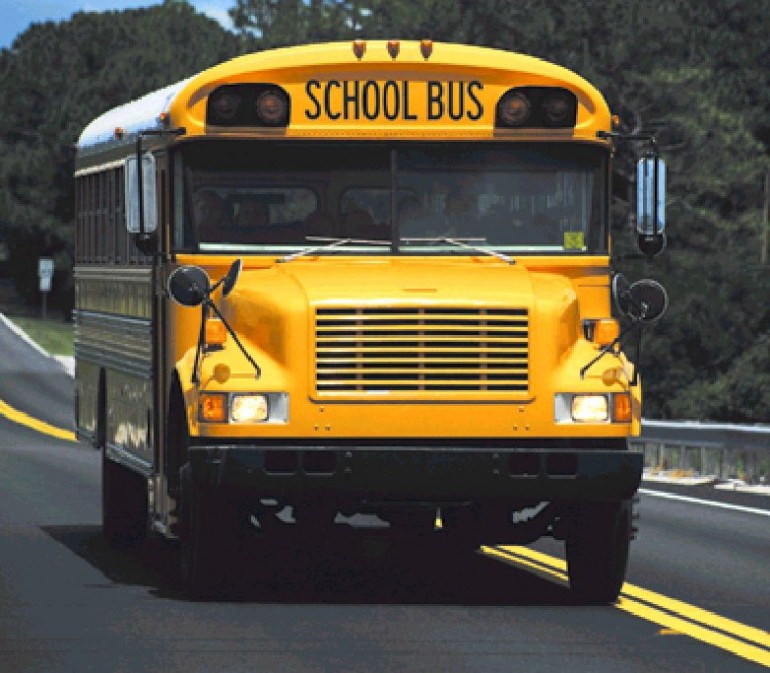 When you yearn for travel, do you see yourself on a bus? Chances are the answer is no. One does not generally romanticize about bus travel. “Ooh, pinch me, this Greyhound is the height of luxury,” is probably not a sentence ever uttered. And I don’t believe I’ve ever seen any glossy spread of a lavish bus station in Condé Nast Traveler. Undoubtedly because there are no lavish bus stations. Yet, glimpsing a yellow school bus rounding the downtown square the other day, I was reminded of how long it’s been since I’ve ridden a bus, growing downright wistful recalling all those rides of yore, especially particular ones of note, some of which were pleasurable, others of which were not. Some of which were worth writing home about, perhaps even worth writing about in a newspaper.

Let us start with that ordinary ol’ school bus, the first bus most of us encounter in our journey through life. I never rode one to and from school. Growing up, my family lived easily within walking distance of Washington Elementary, Turner Jr. High, and the original Jacksonville High School building. Yeah, that makes me “old school,” literally. And yeah, I’ve been walking most places for a long time now. So, while I was not subjected to the daily grind of a bus route, the odd field trip (and some were truly odd) represented for me something exotic, altogether apart from wherever we happened to be going. Chances are I had already been to New Salem, Hannibal, and Dickson Mounds. But before it had been in a station wagon in the summertime with my family. So, often times the destination of these school excursions took a back seat to the mode of transportation, at least in my young mind.

And speaking of back seats, why was the back row always the most coveted one? Perhaps it was the bumpy ride, the very reason most grownups prefer the front rows. But kids love bumpy rides. They don’t want to relax. Relaxation is an adult invention. Also, there’s the privacy it affords youngsters who get little of it. Ever under the watchful gaze of parent or teacher, children in the back row find themselves in the perfect spot for clandestine activity. Not exactly a rebel myself, my most subversive exploits were giving the honk-sign out the back window to a truck driver zooming up from behind, or flashing the peace sign/rabbit ears behind the head of the kid in the seat in front of me. (See, no one can do that to you when you’re in the back row.) In later years, other more advanced delinquents greeted passing drivers with one of those rabbit ears missing, and flashed more than a finger or two. (Insert winking emoji here.)

Ah, the pleasures of youth. That is what I remember from my bus rides as a young kid. No one trip stands out from the rest. They tend to run into each other, overlapping into a single bus ride down memory lane. As I got older, though, there were certain adventures that distinguished themselves from the ordinary outing. But I’m over my suggested word count here. So meet me at the bus stop next week. I’ll hold a spot for you in the back.