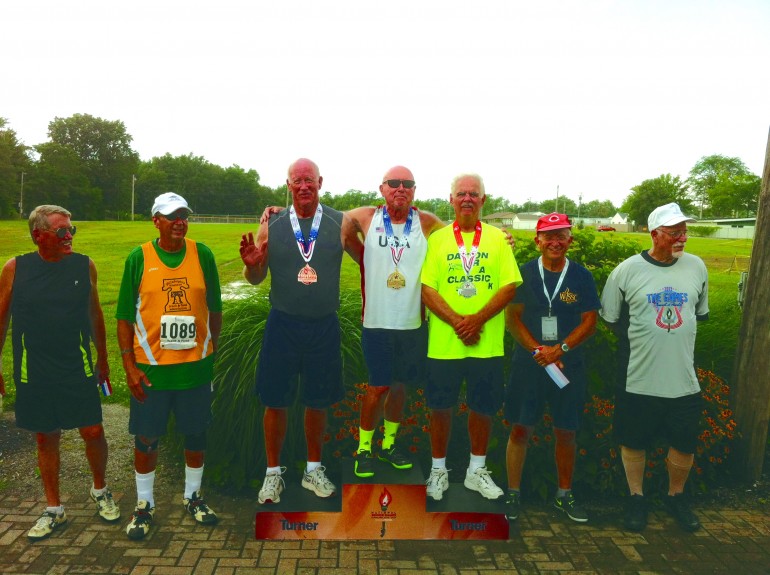 John E. Bourn is a 1960 graduate of Jacksonville High School who lettered in both football and basketball for two years, and track for all four years. Three of those years he held the pole vault record. After graduating from University of Illinois, John practiced veterinary medicine in the Murrayville area from 1971 to 2013.  Recently, he sold Bourn Veterinary Services to Dr. Kasey Hall, which now operates as Murrayville Mixed Animal Clinic.

Growing up being an avid sportsman, John kept active as an adult by playing slow pitch softball and basketball for many years.  In 1998, an article about Ernie Hammond of White Hall was published about his participation in the Senior Olympics.  After receiving information from Ernie, John participated in his first regional Senior Olympics games in track and field at Western Illinois University in Macomb, Ill. in April of that year.

The original leadership for what was first known as the National Senior Olympics Organization started in St. Louis, Mo., in 1985.  Everyone from the ages 50-100 is eligible to compete, no membership required.  There are regional and state meets where competitors compete in five year age brackets.  The top competitors in the state meet qualify to go to a National meet held every other year in a different state.  Pittsburg, Louisville, San Jose, Houston and Cleveland are all national meets that John has competed in.  “Over the years, I have competed in the springs, jumps and throws.  At the present time, my main interest is in the throws, with the throws pentathlon being my favorite.  It is the event where you throw the shot put, discus, javelin, weight and hammer.  Each longest throw scores a certain number of points and adding the five scores from each implement the results in highest score for first place.  I recently placed third in the National Masters Throws Pentathlon,” John explains.  With achievements such as 2nd in high jump (2005), 2nd in hammer throw (2009), 3rd  in hammer throw, 4th in shot put, and 3rd in discus (all 2013), his wife, Lana is his biggest supporter and travel companion.  He will continue to try for that elusive first place that has yet to be attained.  Several competitors alongside John are listed in world rankings.

His biggest motivation is to stay active and to meet new people. Joining them in traveling and participating in several meets are his sister Mary and her husband, Terry Clark.  Their interests were sparked after being exposed at the 2005 National Senior Olympics in Pittsburg. With many different sports to compete in, the games provide participation for anyone interested.  Some events include track and field, cycling, swimming, 5K and 10K, table tennis, shuffle board and many others.  Ron Summers, from Jacksonville is John’s his biggest mentor.  With Ron being a long time top competitor in masters meets, he exposed John to the next level in track and field, being the masters level.

Over the last 15 years, John has won hundreds of medals and gives away most of them on mission trips.  This includes trips to Haiti, Honduras, Nicaragua and Ecuador, with a trip to Africa in March.

Anyone interested in more information on the Senior Olympic Games is welcome to contact John at 217-673-3019 or jebourn42@gmail.com.  You can find out more about the events by visiting www.ilsenoly.org or the national website www.nsga.com.

Audrey Luna is currently the Assistant Manager for Family Video and also 2012 graduate of Western Illinois University. She received her degree in Fine Arts and Communication. Her husband, Nikko and her have been happily married for a year and a half.

View all articles by Audrey Luna