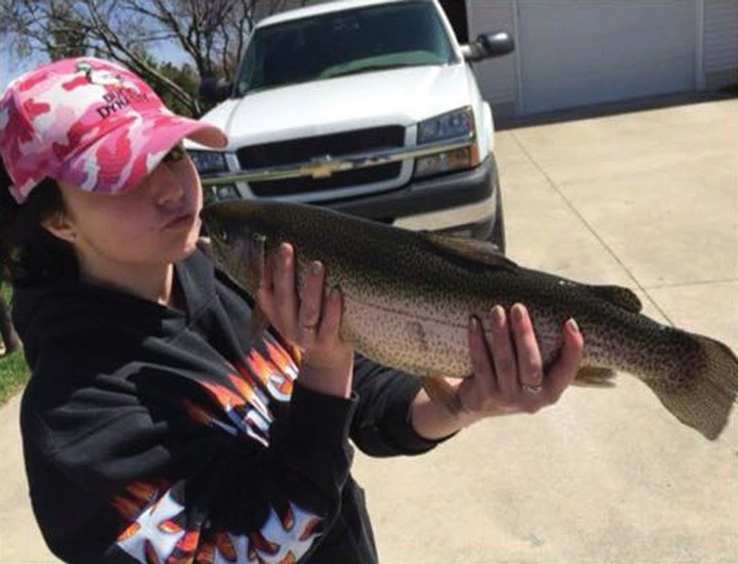 No fear of fish, but actually showing her love for this big guy, Ashton puckers up for a pose with her rainbow trout.

She’s been fishing since age 2. I suppose she could be called be a ‘fish out of water’ due to her enjoyment with being near water. The only “catch” is that 15 year old Ashton Swift shouldn’t accurately be called a fish out of water as she is hookin’ ’em and cookin’ ’em these days. Ashton Swift started trout fishing around the age of 5 or 6, according to her mom, Marie Swift. Marie Swift notes that her daughter “got the love of trout fishing from her dad and her late great-grandfather, Homer Gansz.” Some catches really make it worthwhile, however; on April 4 at Morgan Lake on Nichols Park grounds, Ashton Swift caught a big one.

The Swift family is from Jacksonville and when Ashton Swift discovered from surfing the internet that Morgan Lake at Nichols Park was selected as a new location for spring trout fishing in Illinois, she showed up on opening day. She and her dad, Matt Swift, grabbed their poles and gear and headed out to the lake, excited that Morgan Lake would have trout released into her for the first time. According to the website http://www.dnr.illinois.gov for The Illinois Department of Natural Resources (INDR), “The Illinois catchable trout program is funded entirely by those who use the program through the sale of Inland Trout Stamps. The IDNR stocks more than 80,000 rainbow trout each year in bodies of water where trout fishing is permitted during the spring season.” Nearly 1,000 pounds of these rainbow trout were delivered to stock Morgan Lake locally. This should be a positive for local fishers and for sheer traffic out to Nichols Park.

It ended up that Ashton Swift and her dad fished for about an hour and caught two trout before she and her dad both had their lines snapped by a fish. So, the two adjusted the drag on their poles and soon after that, Ashton Swift caught the five pound rainbow trout. She used PowerBait® to catch the big fish. The plans are to have it mounted (as pride in the catch is warranted by the nice catch). The Swift family grew up fishing, says mom. They’ve been to various lakes and fishing spots outside of Jacksonville. The big five pound rainbow trout that Ashton Swift caught that opening day at Morgan Lake was sure something of which she could be proud; still, you should have seen the one that got away.