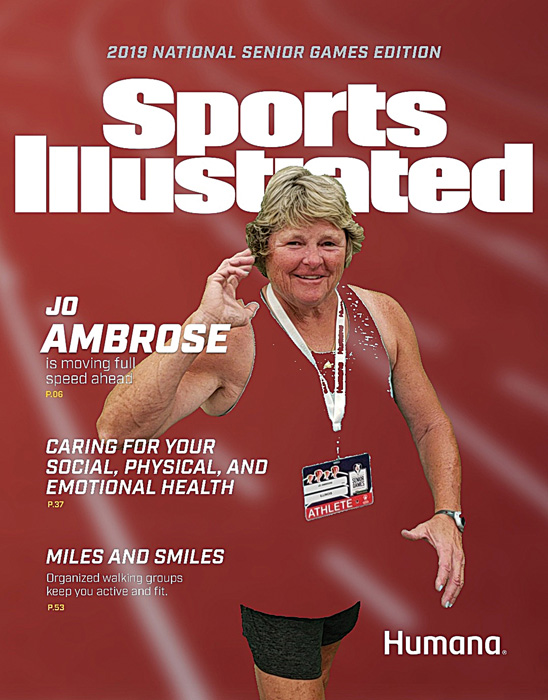 The year was 1973 and Title IX had just begun. That law required schools that received money from the federal government to give their female students opportunities equal to those of males. Thus, opportunities to share some of her athletic abilities were then open to up as Jo Ambrose as she graduated from Northwestern High School in Palmyra. She began her studies at Iowa Wesleyan, then transferred in her junior year to Western Illinois University (WIU) in Macomb.

Forty years ago, college scholarships for female athletes were virtually non-existent, but that didn’t stop her. She knew she had untapped athletic abilities, so she decided to walk on her junior year to become a part of the WIU Leatherneck track and field team.

Pretty successful throwing the shot put and discus her debut year, they decided to grant her a full ride scholarship her senior year. “That was something my parents were pretty happy about,” remarked Ambrose.

Over the years, athletic endeavors have never been too far from her as she played softball and volleyball, plus serving 20 years as an official through the area volleyball circuit. Golf has also been a definite interest of hers, as she currently plays in two leagues, one at Piper Glen in Springfield and the other at Terry Park in Palmyra. Yet, always in the back of her mind, she wondered if she could still throw.

Ladies and gentlemen the answer is a resounding yes!

In 2017, Ambrose decided to dust off her old shot put and discus from her basement and enter the Senior Olympics for Illinois held in Springfield. That year, she gold medaled in both events. She threw the discus at 71-3 and came in at 25-11 for shot put. Then, 2018 brought more hardware in the medal department: 65-11⁄2 for the gold in discus and 23-51⁄2 for silver in the shot put. The Illinois State Olympics began in 1977 and is one of the oldest in the country. It is an annual event with over 20 events for people 50 years of age and older.

The 2018 competitions qualified her to go to the National Senior Games, held in Albuquerque, New Mexico, in June of this year. The biennial competition’s track and field events were held at the University of New Mexico Track & Field and Soccer Complex. Ambrose competed in discus and received the gold medal for her age division, 60-64. Her official throw was 82 feet. The first national games took place in 1987 in St. Louis with 2,500 athletes competing in 15 different sporting events. This year’s event had a record-breaking 13,712 athletes competing in 20 different events. The game is the largest multi sport event in the world for seniors. There were 232 medals awarded to Illinois athletes this year, with 99 being gold, 53 silver and 80 bronze. There are 54 member games across the United States, Canada and Mexico, that conduct qualifying competitions. Humana is a major corporate sponsor of this event.

“I just want to thank all my family and friends for their support as I have pursued this bucket list dream,” concluded Ambrose. “All the encouragement leading up to the event, the cheering me on during the competition, and the post celebrations have been tremendous … Something I will always cherish.”