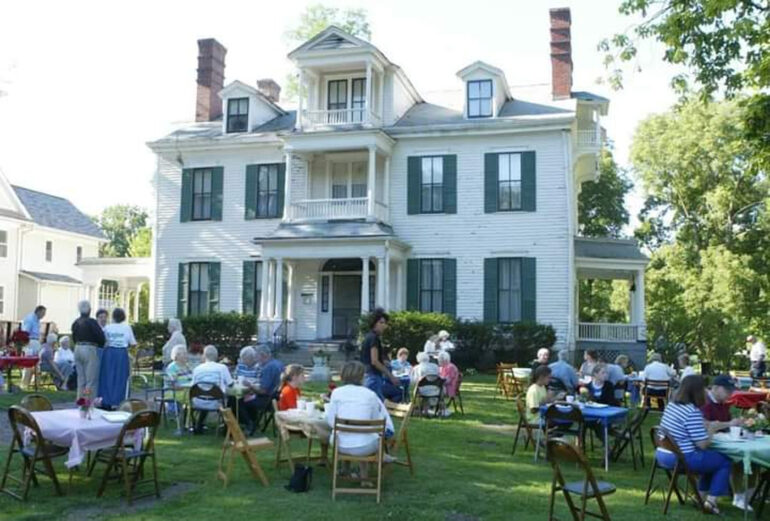 Do you like barbecue on a summer evening? How about a side order of history? Combine those two and organizers hope success is on the menu.

On Saturday, June 25, the Governor Duncan Association is hosting a fundraising barbecue at the Governor Duncan Mansion at 4 Duncan Pl. within Duncan Park. The Governor Duncan Barbecue will begin at 5 p.m. with a social hour that will feature bourbon tasting at $20 for five shots and bottomless beer for $20. At 6 p.m., there will be a barbecue buffet, which will be followed by a benefit auction at 7 p.m. and live music from 7:30 to 9 p.m. All food and bar service will be provided by Hamilton’s Catering.

Even though this is an inaugural event for the association, the idea goes all the way back to 1837. It was in that year that a presidential candidate stopped in Jacksonville on his presidential campaign tour and Gov. Joseph Duncan hosted a big barbecue event at his home. The guest of honor was none other than Daniel Webster, a member of the U.S. House of Representatives from 1823-1827 and U.S. Senator from 1827-1841. Webster was a member of the Whig party, a party he founded in the 1830s, and was at the time of the party one of three candidates vying for the highest office in the land.

While in Jacksonville, Duncan invited Webster to speak to the crowd, which was reported to be several hundred people, from around Central Illinois. It also was recorded that huge amounts of beef, pork and mutton were roasted on fires built in long trenches on the Duncan property. Duncan’s wife, Elizabeth, was quoted as saying, “He made a most eloquent speech, and he took the people by storm. Cheer after cheer resounded through the Duncan Grove, as he stood under a magnificent elm tree.” Local reenactor Buford Stowers will recite the Webster speech at the June 25 Governor Duncan Barbecue fundraiser. Another part of the entertainment that night will be the music of Jamie Headen, David Hays and Tyler Maul.

During the event, there will be a live auction. The members of the Rev. James Caldwell Chapter, NSDAR will be auctioning a three-hour rental of the first-floor mansion with kitchen privileges. The second item on the auction block will be a three-night stay in Asheville, North Carolina at the Blue Ridge Bliss Cabin. Third, you could win an authentic Indian dinner provided by Elam and Jeni Rajaguru. Additional auction items include four tickets to a Cardinals baseball game donated by Jamie Martin, a remote vehicle starter from Westown Ford, a “paint and pour” party for eight donated by Sandy Sanders or a wood porch flag by Tim Sanders.

All proceeds will benefit future restoration projects on the mansion. Some of the upcoming projects include eve and downspout repair, restoration of the upper west porch, and cleaning and painting of the entire building foundation. For more information, visit their Facebook page, @govenorduncanmansion, or search online at www.duncanmansion.com.