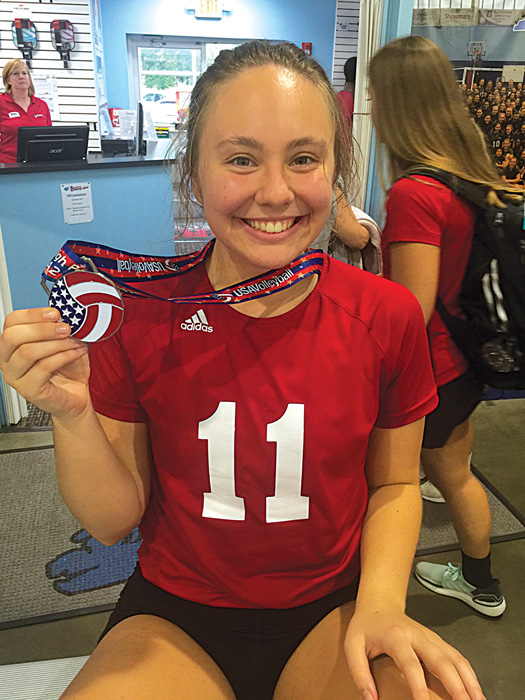 This past year, I made one of the best decisions for myself that I have ever made. Playing volleyball is a part of who I am. Starting as a young child and developing into a four-year varsity athlete, volleyball is the most important activity in my life. My junior year, I decided to take things a bit farther. Having played for a club traveling team in Jacksonville for the past five years, my parents and I knew that I needed a more rigorous program. We made the switch to a club in Springfield, Top Notch, and quickly realized we had made the right decision. Shortly after joining, I became close with all of my teammates and developed friendships that grew to feel more like family. United by the common goal of winning and love for the game, along with an amazing coaching staff, we began our season. Instantly we all clicked on the court; watching us play together, you’d never be able to tell we all were from different towns and high schools. For the duration of our eight-month season, each practice and tournament was aimed to prepare us for post season.

The AAU Volleyball Nationals in Orlando is the biggest event for club teams around the country and even pulls teams from around the world. Attending this tournament gives huge exposure to hundreds of college coaches that flock there to recruit possible players and provides unmatched competition that teams don’t see during their normal season. For four straight days, my teammates and I competed at Nationals and spent our free time by the pool. In the beginning, your coaches choose a division for your team to be in: “open” is the highest level, “club” is the middle, and “classic” is the lowest. My coach had chosen club, which was the best selection for our team. The first day of games, we placed second out of our four-team pool, and unbeknownst to us at the time, the team we lost to finished fourth overall and completely blew us out of the water. The second day, we came back with high hopes of earning our spot in the top bracket, Gold, by placing first or second in our pool. Our hopes were slightly dampened after losing the first game to a team that would end up placing first overall, being the best team in our division. After the hard loss, my teammates and I had to face a team from Hawaii. The girls on the Hawaiian team were no taller than 5’5’’, but their defense was incredible. They never let the ball hit the floor and we were unable to exploit their weaknesses, costing us the game. Our enthusiasm was at a low point after losing since we all knew there was no way to be in the gold bracket.

We had a small break, so one of my teammates pulled us together and gave us a pep talk, which ended up working. We won the last game, placing us in the Saphire bracket which is the fifth bracket out of ten. On the third day, we struggled to string together many points. Volleyball is a game of momentum and the third day, we had none of it. My team lost all three games to opponents that were very equal in talent to ours. I believe if we had faced these teams during our regular season, without the pressure of Nationals, we would have been able to beat them. Having lost so many games the previous day, day four we were placed farther down in our bracket. On the final day, if you lose a game then your time at the tournament is finished, so we were more motivated to stay than ever. We faced a team that we beat relatively easily, allowing for another game to be played later in the day. After sitting for an hour, we played our final game of the tournament. The first set, we lost 13-25, unable to keep a solid defense that connected with the offense. The second set we came back with more passion and although we lost 23-25, every girl on the court was fighting until the very end.

With the week coming to a close, our effort earned us the rank of team 252 out of 2,429 teams at the tournament. That final loss was the end of our season and for some of the girls on my team, the end of their career at Top Notch. Our coach gave us all a wonderful talk, complimenting what we each contributed to the team and how much hard work it took to get to that point. With everyone crying and saying goodbye, I walked over to my mother and grandmother who had traveled the entire week with me. They, too, were crying and hugging me — and in that moment, I realized that I had one of the best support systems around. My mom had put in endless research, work and time into my entire club season and my grandmother traveled a 16-hour car ride and sat through four days of non-stop volleyball … for me. Without their and the rest of my families’ help, I would not be the player or person I am today.

Reflecting on the season, I know I made the right choice by choosing to switch clubs. Driving to Springfield as soon as school got out for three days every week for eight months and spending more time conditioning and training than I ever had before opened my eyes to the realization that I want to play in college. To try and make that dream come true, I tried out for a USA Team Training Program through the Qualifier Tournaments that my team attended. Thousands of athletes try out at each tournament in hopes of making one of the teams. There are four programs that you can be placed on if you make the cut. The USA National Team, consisting of 12 players that travel to Egypt to play; USA A1 National Training Program, including 36 players that travel to Florida; USA A2 National Training Program, with 100 players that travel to South Carolina; and USA A3 National Training Program, having 126 players traveling to Illinois to play. After trying out, I received an invitation to play on the A2 Team in Rock Hill, South Carolina.

I trained July 25-31 with the other girls selected in hopes of making the USA National Team and getting exposure to colleges in the area. After I returned, I am following up with my experiences and takeaways from the USA Team National Training Program.