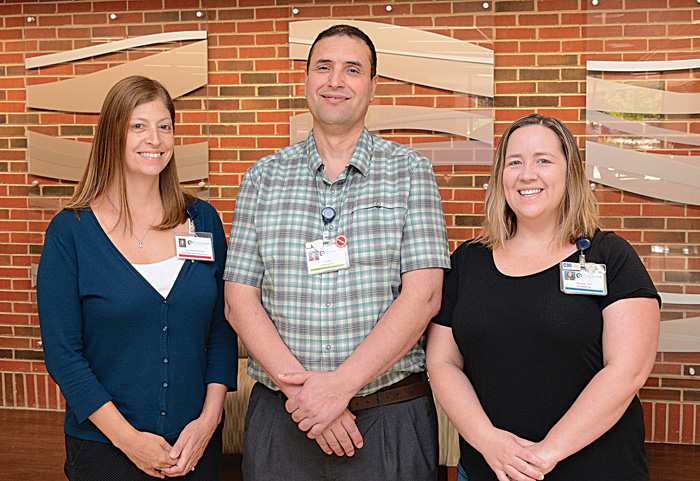 With not only the increase of immigrants through JBS (formerly Cargill) in Beardstown expanding over the last two decades, but also the Jacksonville area having a high population of deaf and hard-of-hearing, Passavant works to ensure the communication obstacles are not a hindrance in medical services.

Although interpreter services have been an active part of the hospital’s patient care initiative, the governmental guidelines have become stricter to ensure service is available to those in need. American Sign Language (ASL) interpreters had to be certified and licensed by the State of Illinois beginning in January of 2009. Joan Engelmann, ASL interpreter for Passavant Area Hospital and interpreter coordinator for interpreter services, has been working for the hospital since 1991. Engelmann holds a B.S. from MacMurray College in deaf studies: teacher education, and a Master of Science from Idaho State University in communication science: education and interpreting.

In addition to ASL interpretation, the hospital expanded their program in 2016 to meet the language access definitions under the Affordable Care Act. They added two full-time employees specializing in Spanish and French. Katelin Cruz holds a B.S. in healthcare management from Rasmussen College and has been interpreter for 12 years, primarily in medical settings. She began working at Passavant as a bilingual C.N.A. in 2011 and changed roles to full-time Spanish interpreter in 2016. She was the first nationally CCHI (Certification Commission for Healthcare Interpreters) Certified Healthcare Interpreter for Spanish in Central Illinois.

Also in 2016, Youssef Tazi joined Passavant as a full-time French interpreter. He had been interpreting professionally since 2009, beginning with Cargill/JBS and Passavant. Originally a citizen of Morocco, he speaks French, Arabic and English, and became a U.S. citizen in 2016. He holds a core certification from CCHI.

Engelmann, Cruz and Tazi started working together to build a curriculum and ultimately taught a 40-hour medical interpreter training course, a requirement for medical interpreter certification testing. They taught three courses in Jacksonville and one course in Springfield to capture as many spoken language interpreters as possible. Due to these efforts, Passavant has become a testing site for CCHI. Interpreters for Passavant, SIU, Springfield Clinic and Memorial Medical Center have all been certified through this program.

In addition to the three full-time employees, they have on-site contracts with 18 people for ASL, eight for Spanish, eight for French, one for Mandarin, one for Lingala, two for German, one for Luxembourgish and one for Arabic. In addition, Stratus, their contractual vendor for video remote and audio interpreter services has interpreters available in 33 different languages via video and 120 languages via audio. This free service is available to all patients in need; you just need to request. By law, all healthcare entities must provide this service to its patients.