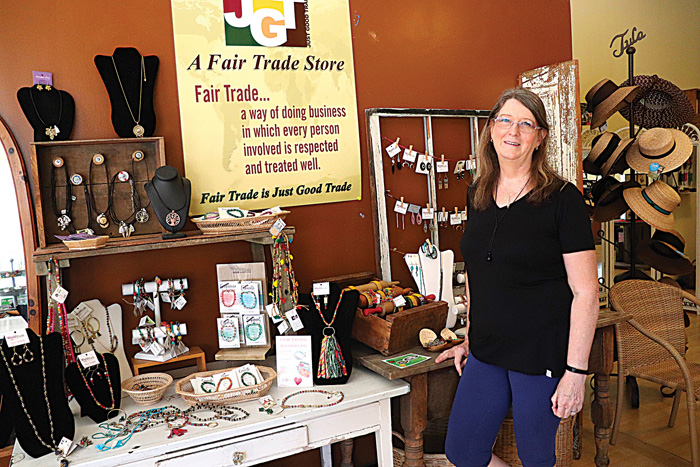 Sometimes in life, it just takes looking at things from a new perspective. Rhonda Knapp Kircher at Just Good Trade, 56 N. Central Park Plz. in Jacksonville, looked around her store in August and decided to change things up inside. Six years ago, Kircher did something similar with her entire life.

At that time, Knapp (as she was still under her maiden name) was the office manager at Bader Ag Services. She had been with the company for 12 years and was recently engaged to Alan Kircher. It was then that she met Amy Kay Pavlovich at the first Bridal Expo at Hamilton’s.

A little while later, Alan Kircher’s niece was getting married and he and Knapp needed a bridal shower gift. “The first time I shopped with Amy Kay was at her home on College,” said Rhonda (Knapp) Kircher. “She opened Just Good Trade on the square not too long after that. She got me hooked on coffee and I started spending time here shopping. She and I became friends and after a while, I asked to her to perform our wedding ceremony.” Pavlovich was the chaplain at MacMurray College.

She continued, “In February, before we were supposed to get married, Amy Kay posted on Facebook that she would either close or sell the store because they were moving back to Kansas. So, I called Alan and complained, ‘Amy Kay is closing my store.’” The store had sparked something special inside of her. Alan Kircher surprised her and said, “Maybe we should buy it.” This was a prospect that Rhonda Knapp (soon-to-be Kircher) really hadn’t considered.

“I was terrified when I bought the store, but I have to thank Amy Kay for getting me started. She just made it easy for me to step in and just take over,” stated Kircher. “I’m kind of a fly-by- my-seat-of-my-pants person. The computer and doing the sales were easy. The hardest part is deciding what to put in here.”

What is Fair Trade?

“Really, what it amounts to is that everything is handmade by people in developing countries,” explained Kircher. “It is not mass-produced in factories. The Fair Trade Association guarantees that there are no sweatshops involved and no child labor. A big part of fair trade is about stewardship of the earth, meaning a lot of things are made out of recycled items or things available close by. Another big part of Fair Trade is that they don’t want artisans to lose their culture, they are encouraged to utilize traditional jewelry styles and tie-dyed fabrics. For instance, the Kantha quilts are a traditional Indian art form made from recycled textiles (such as old silk sari fabric).”

Fair Trade impacts approximately one million lives, 75 percent of whom are women according to the World Fair Trade Organization.

“They try to make sure everybody can work, even if they have a disability. Some of the items are made by people who have lost a limb from landmines or women liberated from human trafficking. Fair trade also provides better infrastructure like paved streets.” Kircher emphasizes, “I always like to say it’s a hand up, not a handout.”

Fair trade also ensures artisans have a voice. Artisans help in the decisions on the products they make, the styles and work with vendors to find solutions for merchandise that might not be selling.

“Sharon, one of my vendors, works with artisans in Thailand, Guatemala and South Africa. If she has a design that isn’t selling, she goes to the artisans and they work together to a find solution,” Kircher clarifies. “The artisans want business to succeed as do everyone along the line.”

“When I am asked about sale items, I explain that it’s not marked up enough to have sales. Artisans set the price, the vendor adds a little, and then the store adds a little. Yes, everyone has to put on a little bit to make some profit, but it’s not marked up 300-400 percent like a lot of stores that plan for eventual sale prices that way. Prices here are always reasonable. If we put anything on sale, we either break even or we lose money and that doesn’t keep the doors open. The things that don’t move, I donate, or I give to a mission that works mostly with people overseas in developing countries.”

However, Kircher does have a “Country Club” card. Buy five items from five different countries to fill out the card and it becomes a coupon for 25% off a single item (excluding food). “It’s been good for customers,” says Kircher, “because like me, a lot of people are drawn to the same countries. It really makes everyone more aware of where items come from.”

Kircher says it has all been good surprises with the store. “I used to be really shy and this place has been good for making me talk to people like I wouldn’t have before,” says Kircher.

Kircher’s favorite thing about owning her own business? “All of it,” she exclaims. “It has been a great experience. I’ve never owned a business and didn’t take business school classes. I used to speak to Kevin Klein’s Illinois College entrepreneurial class. I’d tell them, ‘You are doing the right thing in this class. If I can own my own business, then anyone can.’”

“It’s also been good for Alan and me,” she continued. “He’s a farmer and I’m used to working outside the home. It gives us each our space. I always say this is my feel-good place. I love working and having the store in Jacksonville and everyone has been very supportive. I’ve learned a lot, not only about the business but about different countries and different people. It has gotten me out of my comfort zone.”

Come in and shop this local gem and get to know Kircher; you’ll be glad you did! Just Good Trade is closed Sundays and Mondays, but open 10 a.m.-6 p.m. Tuesday-Saturday.