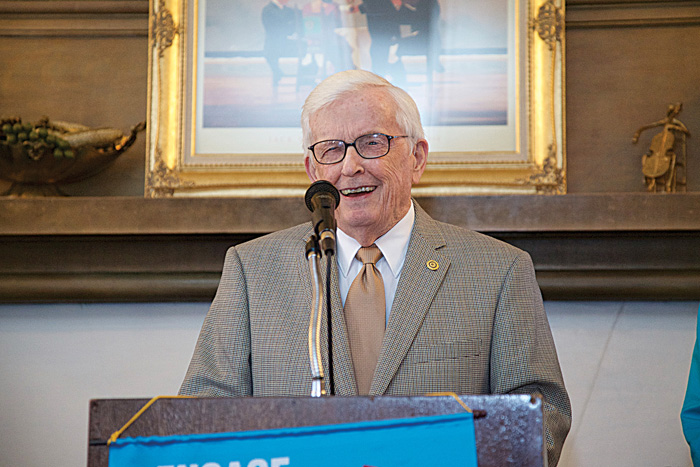 Congressman Paul Findley, former United States Representative of the Illinois 20th District, died on the morning of August 9 in Jacksonville, Illinois. Congressman Findley was born in Jacksonville, Illinois on June 23, 1921, the son of Joseph Stillwell and Florence Nichols Findley. He attended Jacksonville High School and Illinois College, where he earned a B.A. in 1943. Following his graduation, he served as a lieutenant in the U.S. Navy in the Pacific theatre during World War II. He met his wife, Lucille Gemme Findley, while both were stationed on the island of Guam. Following the Allied Victory, the couple moved to Washington D.C., where Congressman Findley started working as a journalist. Shortly thereafter, the couple moved to Pittsfield, Illinois where Congressman Findley became the president of the Pike Press. In 1960, he was elected to serve in the Eighty-seventh United States Congress, a position to which he was elected for 11 terms. During his Congressional service, he was a strong advocate for peace and cultural awareness. He was an unyielding advocate for Civil Rights, an outspoken opponent of the Vietnam war, and a primary author of the 1973 War Powers Act, which limits the President’s authority in waging war. He served with distinction on the Agricultural and Foreign Affairs committees and was known for his support of family farmers, and as an advocate for engagement with the Arab world, particularly Palestine. Congressman Findley was proud and humbled to serve the same district as President Abraham Lincoln, was honored as a Laureate of the Lincoln Academy, and considered the transfer of the Abraham Lincoln Home in Springfield, Illinois to the National Parks Service one of his greatest achievements as a congressman. Following his service in Congress, he continued to support agricultural development and was actively involved in foreign policy as an author and lecturer, as well as his work with the Board for International Food and Agricultural Development, the Council for the National Interest, and the Council for American Islamic Relations. A champion for his state, region, and community, Congressman Findley was a life-long congregant of the First Presbyterian Church, a member of Rotary Club International and the Jacksonville Literary Union, and an affectionate alumnus of Illinois College and his literary society, Phi Alpha. Until his mid-80s, he was a daily tennis player and an avowed ice cream enthusiast (a tradition he passed to his grandchildren). He was thrilled to support his children and grandchildren in pursuing higher education, and was delighted to witness the marriage of all four of his grandchildren and to meet each of his great-grandchildren. As a person, he was unfailingly kind and gracious, welcoming any and all into his home for coffee and conversation. He strongly believed in treating all people with dignity and respect and was driven by a curiosity to understand the experiences and perspectives of others. More than anything, his legacy should reflect in the value he placed on human connections and simple daily interactions with fellow community members. Congressman Findley is survived by his sister Barbara Findley Stuart of Normal, his son Craig (wife, Karyl) Findley of Jacksonville, his daughter Diane (husband, Thomas McLaughlin) Findley of Ft. Collins, Colorado, his grandchildren Andrew (wife, Grace) Findley of Indianapolis, Indiana, Cameron (wife, Laura) McLaughlin of Windsor, Colorado, Henry (wife, Katie) McLaughlin of Ashland, Oregon, and Elizabeth (husband, Anthony Vicha) Findley of Springfield, and his great grandchildren, Dominic and Samuel Findley (Andrew), and Lillian and Vienne McLaughlin (Cameron). He was preceded in death by his parents, his siblings Ruth, William, and Miriam, and his beloved wife, Lucille. The family would like to offer our heartfelt thanks to the caregivers of Heritage Health and Passavant Area Hospital for their dedicated support of Congressman Findley over the years. A memorial service was held at 10:30 a.m. on Wednesday, August 14, 2019, at First Presbyterian Church, 870 West College Avenue, Jacksonville, Illinois. The family met friends from 4-7 p.m. on Tuesday, August 13, 2019, at the Paul Findley Congressional Office Museum, located in Whipple Hall on the campus of Illinois College, 1101 West College Avenue, Jacksonville, Illinois. Memorials can be made to the Lucille Findley Educational Foundation or the Illinois College Student Success Endowment Fund. The Williamson Funeral Home is in charge of arrangements. Condolences may be left online at www.airsman-hires.com.

Congressman Paul Findley made an impact and was a valuable statesman. With his passing, we extend condolences to family and friends. We are reprinting the following past article in memoriam.

We had a discussion about newspapers

We had a discussion about newspapers, Paul Findley and I. The former United States Representative from Illinois represented its 20th District as a republican. Born in 1921, he is a fascinating and accomplished ex-congressman, who to date continues to be an author and lecturer. Sitting in his office, I was positively inundated with images or décor representing not only his family, but also his personal and political story.

Findley graduated from Illinois College and left for WWII in January of 1943, serving in the United States Navy until 1946. It was there he met his wife, Lucille, a flight nurse in Guam. “We didn’t have any money or jobs,” said Findley, “but that didn’t matter.” After the war, Findley had a dream of getting his “own little paper – so (he) could sound off.” The Jacksonville Record was the prospective name. He was serious about getting a weekly started. Still, just as he was close to leaving for a job in Washington, D.C., Findley received a letter. Essentially, that letter in 1947 offered Findley the opportunity to buy a third of the Pike Press newspaper in Pittsfield, Ill., – and to go run it. “My life has been full of luck,” notes Findley. “It proved to be an excellent experience. “ The paper gave Findley an option to have a corner politically, “a way to express (his) opinions,” he said.

Findley was elected as a republican to the 87th, and then to the 10 succeeding Congresses. His congressional span ran from January 3, 1961 to January 3, 1983. At that point, he says, “Lucille and I didn’t hesitate. We wanted to come back to Jacksonville and make our lives here … we came here for a lot of reasons. I’m hooked.” Findley spoke of seeing the misery on television, in Nairobi or Timbuktu or what have you: “I wonder why I was lucky enough to be born in Jacksonville.”