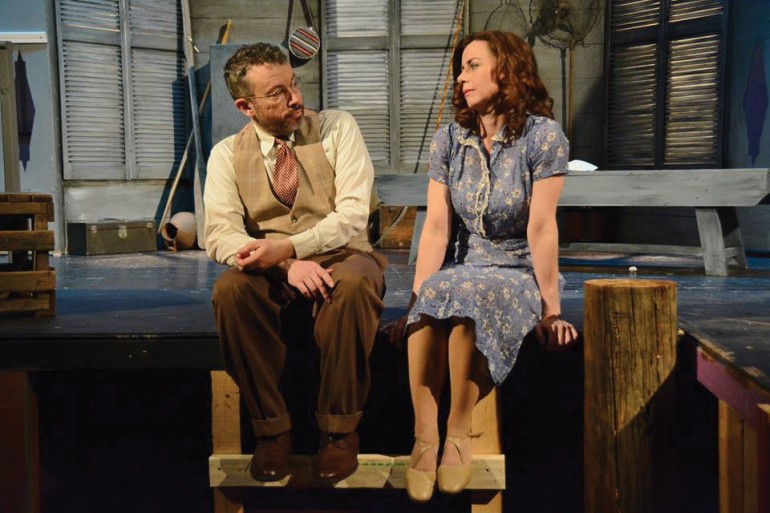 When actress Mary Young got the call last Sunday afternoon she recognized the happy voice on the other end of the line. It was her acting partner Johnny Molson with, “Well Miss Sally Talley we have been invited to advance to regionals!” She said, “Winning wasn’t even remotely on my radar.”

Jacksonville is known as the home of quality theatre, but on November7-9 a genuine award winner will be headed our way.  The top play of the Illinois Association of Community Theatre Festival will be playing at Jacksonville’s Playhouse on the Square after recently taking top honors at the organization’s annual competition at the Hoogland Centre in Springfield. Lanford Wilson’s Talley’s Folly won the 1980 Pulitzer Prize for drama and it’s a romantic comedy set in an old boathouse near Lebanon, Missouri, in 1944. The play takes place in one act with no intermission.

The production coming to Jacksonville features two of Springfield’s most accomplished actors, Johnny Molson and Mary Young. Rich McCoy of Jacksonville directed this production that took top Illinois honors, and Molson also won the award for best actor in the competition. Talley’s Folly will represent Illinois in regional AACT competition next April in Midland, Michigan. This winning production was first presented at the Hoogland last March.

McCoy said, “I am ecstatic that others recognized the gifts these two have presented. I knew early on in the rehearsal period that they were right for these role and their dedication has paid off.” He added, “What better reward for a director?”

Ms. Young agreed with her director. “Working on Talley’s Folly has been one of the great joys of my life.” She said that the script appeals to her because, “These aren’t fancy folks. They’re just ordinary people  . . . ordinary, bright and a little sad. . . but they long to be happy and wonder if they can be with each other. It’s a real honor to perform this play and when audiences love it, it makes me very happy.” She called the theatre competition, “a little mysterious, a little nerve wracking, but above all a great experience.”

This was the first time that Springfield’s Hoogland Center hosted the competition and Talley’s Folly was already scheduled to appear at the Playhouse on the Square before the Springfield event took place. Director McCoy said, “It’s always great when we can share productions back and forth between Jacksonville and other communities, and bringing Talley’s Folly to Jacksonville is exciting for all of us. Even though this was a theatre competition, theatre isn’t really competitive.  We celebrate what our fellow performers are doing.”  Ms. Young agrees. “The idea of representing Illinois with a production that has been such a joy and with people whom I greatly admire is a wonderful thing. I would have been happy to just to perform it wherever and not win any awards at all. It’s just the cherry on top of the icing.”

Advance tickets can be purchased next door to the theatre at Our Town Books or by calling 491.3977.