Golf is a unique sport in many ways. Golf is unique in the fact that it can be played by both the very young and very old. Various people pick up golf at various times in their life, whether they held a putter in their strollers or took their first swing in their fifties, golf is a game for all people of all ages. Golf is unique both in its physicality and social settings; physically, it is played on enormous fields of grass, on assorted degrees of elevation, with the goal being to use the least amount of strikes possible in dropping a small white ball (approximately 1.68 inches wide) into a 4.5 inch-wide hole that sits anywhere from 100 to 600 yards away (no wonder its conception sprang from a handful of possibly intoxicated Scots). Socially, golf can be both competitive and laid-back. While serious golfers spend large chunks of their paychecks on the latest and greatest club technology and compete in organized tournaments with strictly outlined rules, the casual golfer heads to the course for an afternoon in the sun, guzzling six packs with his compadres over the course of 18 holes.

Having worked at two golf courses for close to five years, I’ve seen the entire spectrum of golf-goers – from the guy in a (homemade) cut-off t-shirt, (homemade) jean-shorts, and (not homemade) trucker hat, to the teenager wearing spotless white trousers trying to make his high school’s golf team. I’ve seen competitive tournaments, held under the watchful eye of various youth golf organizations, where parents will fork over credit cards just to get their kid registered. I’ve seen groups of old friends who once lived in the same area but now only get together maybe once or twice a year at their favorite course, just to catch up and share old stories. 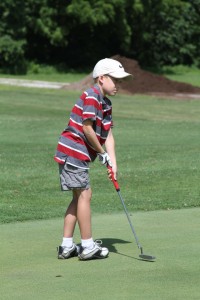 Equally unique to the game itself is The Robbie McEvers Memorial Golf Tournament, first started in 1979, which will commence its 36th annual youth tournament on July 30-31. Hosted by The Links Golf Course in Jacksonville ever since its inauguration, the tournament started as a way to remember nine-year old Robbie McEvers, a local of Jacksonville, who sadly passed away due to complications with leukemia. The idea was to organize a free youth tournament, open to kids between the ages of 5 and 18, played every year at Jacksonville’s Nicholas Park and Links courses.

“There was a whole committee of people – friends of Robbie and his parents – that started it in 1979 and ran it for twenty years.,” said Kurt Heller, who’s been involved with the tournament for sixteen years. “I talked to Bob Sims, who was on the committee, and he told us that planned to stop having the tournament after the twentieth year. Brian Dawson and I happened to be playing out at The Links that night and we decided it would be a good idea to keep it going, both for the kids’ sake – at the time they had about 300 kids playing – and because of all the money it brought to local hotels, gas stations, restaurants, etc.

“So I went back to Kiwanis and talked to several people, like Kai Schnitker and Keith Bradbury and Jerry Simonds and they thought that it sounded like a good idea. So I kind of spear-headed it and Kai Schnitker, Brian Dawson and I went and watched the last two years of the tournament to see how the McEvers ran it and what they did.”

Undertaking the management and organization of the tournament in 1999, Jacksonville’s Kiwanis Club, with the vision and guidance of the McEvers family, has successfully maintained the Robbie McEvers Memorial Tournament for an additional 16 years and counting. As it was back in 1979, registration for the Robbie McEvers is still free for all golfers of all ages, bringing in approximately 150 to 200 golfers from throughout the state of Illinois and in some cases even beyond. 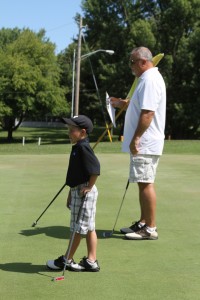 “We get a lot of families that come back year after year and you get to see both older and younger siblings that continue to come up, so that’s fun to see,” Heller said. “It’s a pretty neat thing when you recognize some of the parents that bring their kids for multiple years, it’s good comradery.”

Unlike the more competitive tournaments, the Robbie McEvers – while still adhering to the rules of golf – provides for a more relaxed golfing atmosphere. Aside from the free registration, the Kiwanis Club, through various contributions from the community, are able to provide free hot dogs and soda to all participants.

“The main money source comes from what we call patron letters, which are sent out to the community, and people can donate $25 or $50, which helps pay for the hot dogs, the buns, Pepsi products, and greens fees,” explained Heller. “Without the community’s donations, we wouldn’t be able to have the tournament, so we really appreciate that. Free soda, free hot dogs and free golf, you can’t find that anywhere else. That’s what makes the Robbie McEvers unique, and we couldn’t do it without the volunteers from Kiwanis and without the money that the community donates back. It’s fun, we enjoy it.”

For anyone interested in participating in the Robbie McEvers Memorial Golf Tournament, please visit www.mceversgolf.org or call 217-473-8106 for further details regarding registration and contact information, as well as directions on how to find the course. Registration forms can be filled out an online at the aforementioned website or by visiting one of Jacksonville’s three local golf courses, who’ve been provided with physical application forms. The registration deadline for this year’s tournament is Wednesday July 1.