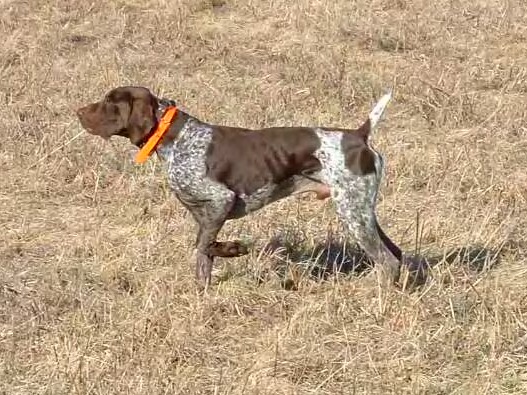 Dogs … some of his best friends.

Josh Tucker, owner of Trophy Time Gun Dogs, competes nationally on three pointing bird dog circuits. It all started in 2001 for Tucker. He had always hunted without dogs before then the first time he saw what a bird dog could do, Tucker recalls, “It was like magic.”

Watching a dog “point a bird,” to not see it and just use their nose was some sort of supernatural power, it seemed. It’s done by scent – some dogs can “wind a bird” at 60 yards, shared Tucker. It’s quite impressive, the dog will smell the bird and instinctively stop and point the bird. Tucker explains how the tail usually comes up, body stops moving and it is just an intense point. Googling the images of a dog pointing was impressive; the animal truly freezes and becomes rigid, sometimes lifting a leg to exphazise the direction of the bird. Even at a young age, the bird dogs will point; it is almost innate in the breed. With training, the skill is refined. Aside from their name, the bird dog and handler use four basic commands: whoa, dead, fetch and here.

Tucker specializes in German Shorthaired Pointers, commonly referred to as GSP, for the most part. He says he competes because he loves it and he meets a lot of great people. (Even during our conversation, Tucker had to silent texts from “dog guys,” some of his great friends. And speaking of meeting people, you may also recognize Tucker as the General Manager for Green in Jacksonville.) Thirdly, Tucker loves the sport of it; “They are a long line of champions. Every one of these dogs that is a champion has my name on it. It’s a pure, clean (sport),” Tucker says. Triton was his first GSP, his bird dog with which he ran field trials. At nine weeks old, Triton became part of Tucker’s life. For the first six months of their lives together, the two were inseperable, learning everything jointly and creating a bond of love and respect. “He was a very special dog. He never left my side for any period of time over a few hours (during the first two and a half years of his life),” recalls Tucker. Triton’s first competition was a field trial in Hillsboro, Ill. in March of 2002. At six months old, he won third place in his puppy division … from then on, Triton proved to be a true champion, going on to win a long list of not only national, but also world championships. Triton earned Third Place in the 2008 World Championship of Bird Hunting. A listing of Triton’s accomplishments and trophies can be found at http://www.trophytimegundogs.com/dog_biographies.html. It’s an impressive list. Tucker would reward Triton with steak sometimes; he did so well that “by the time he was four or five, he was gettting filet mignon.” The competitions had become not only a hobby for Tucker, but also a passion. He loves these dogs. Tucker spoke of his respect and love of Triton, noting that, “He was a phenomenal dog. I learned more from him than he ever learned from me. He’s who started it all.” 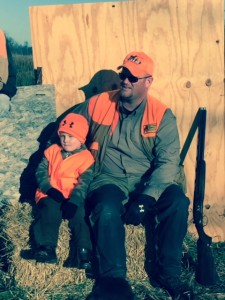 Josh Tucker, owner of Trophy Time Gun Dogs, sits with his son, Joshua, during a hunting trip. Not only does Joshua like to help with the dogs, but also daughter Faye loves to lend a hand in their care.

Along with biographies of some of Tucker’s other dogs, including Travis (Triton’s son), Jade (mother of Travis and many champions) or Thor and Buck (brothers that currently run with Tucker), for example, Tucker’s website trophytimegundogs.com tells more about the business. Trophy Time Gun Dogs also offers expertise in hunting dog training and a large quantity of hunting products and needs. Founder and Owner of the business, Tucker is now involved in promotional trials, having done so for almost six years.

It’s even a family affair. Josh Tucker and wife, Amy, have two children, Faye and Joshua, who love to help take care of the dogs. It’s a full circle of love. “Every time they get a bath, my wife puts on a new hankerchief for them. They’ve got their ‘bling’ on.” The dogs get love and are part of the family. Plus, Tucker comes from a “dog family,” noting that his granpa was a world champion coon hunter and squirrel hunter. Still, it’s not just Tucker’s family; he takes a lot of father and son pairs or even whole families out to local preserves or state parks for their first hunting trips. “I love to bring people into the sport. The bonding … that’s what it’s all about.”