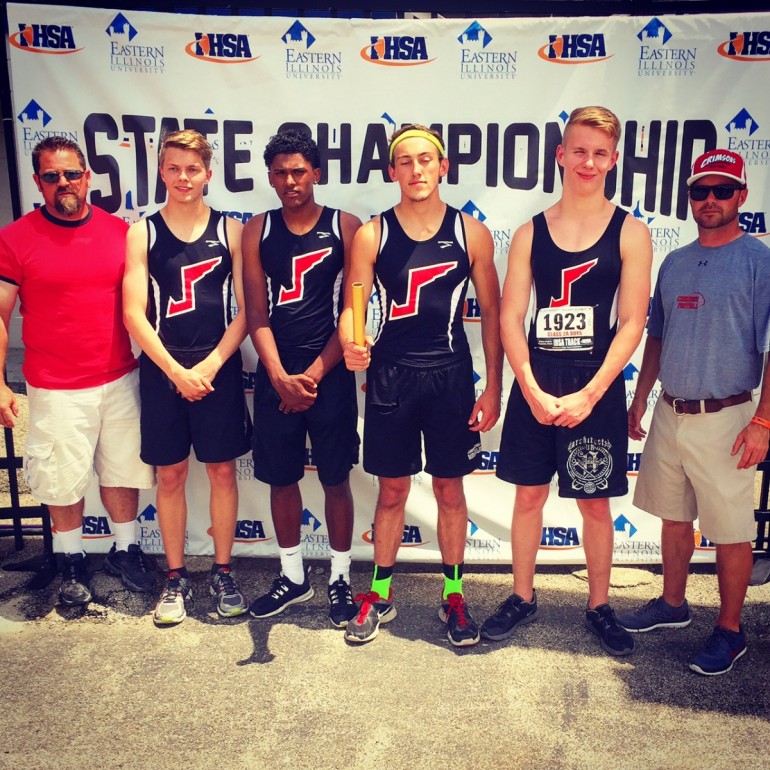 Over this past weekend, the Jacksonville High School track team sent several athletes to compete at the IHSA state meet in Charleston, Illinois. Among the athletes were senior Gabe Megginson, who competed in the Class 2A Discus Throw, as well as the 4×400 relay team of sophomore James White, juniors Noah James and Evan Weigand, and senior Walt Miller.

Having qualified for the state meet after promising finishes at their supersectional meet, these athletes would contend for state titles against some of the best competition in Illinois. Gabe Megginson, who’s committed to play football at the University of Illinois next fall, took eighth place in the Class 2A Discus Throw with a mark of 155 feet and 3 inches. On his way to the top ten finish, Megginson edged fellow CS8 thrower Mitchell Hughes, from Chatham-Glenwood, who took home twelfth. As for the title, Carbondale High School’s Sam Sikon took the highest place on the podium with his throw of 174 feet and 7 inches.

Since 2011, the JHS track team had broken every sprint record in school history except for one, the 4×400 relay record set back in 1987, and entering this year, it was the last record to be broken. This year’s relay team, made up of James White, Noah James, Evan Weigand and Walt Miller would eventually break that mark with a time of 3:23.86 in a run during super sectionals.

With the new record in hand, the relay team tried their luck at the state meet on Saturday, where they would break their own record with a time of 3:23.15, good enough for seventh place in Class 2A. And with the trio of White, James, and Weigand all returning next year, there’s reason to believe that the school record might not hold up for too long. Taking first in Class 2A was the relay team from Cahokia High School, a perennial power in IHSA track, who ran a blistering time of 3:17.57 on their way to the top of the podium.